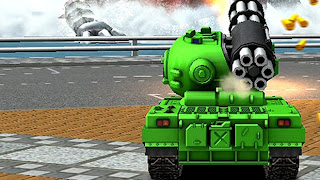 If you were to think of Monster Hunter, and turn those big epic monster battles into simple-to-control arcade action battles, you’d be surprisingly close to Tank! Tank! Tank! As an arcade game it lacks for any of the depth of Monster Hunter, of course, but the same focus on gigantic conflict is as compelling here as it is in Capcom’s series, and the easy controls make for a wildly dynamic multiplayer experience.

Just to emphasise: this is an arcade game. A very popular one in its homeland of Japan, but this means a couple of important things. There is no story to speak off and there is no depth beyond unlocking more tanks and levelling them up (no customisation, they just get more powerful according to prescribed paths with each new level). In the single player game each mission lasts for around three minutes, and it was incredibly disappointing to find enemies were reused (albeit more powerful and a different colour) by just the 13th level. Yes, by around the 39th minute, you’ve seen a solid 80 per cent of what this game is going to offer. From that point on new enemies and levels are few and far between. 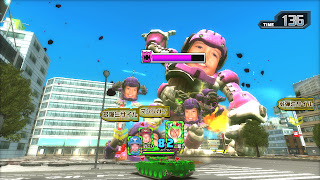 All of that is standard for an arcade game, and Namco has picked some nasty ways to pad out the game’s length so that players don’t jump into the activity log and think they didn’t get their money’s worth. Each time a tank completes a level for the first time it earns a medal. By around the 10th level players need to have replayed missions with different tanks to have earned enough medals to unlock the later levels. It does lengthen the game, but it’s a cheap way to do it.

It’s just as well that the range of tanks is surprisingly varied and it’s fun to mix things up and complete levels with different tanks. Each tank has two powerups it can pick up on stages, and this further ensures that the experience of playing with each tank is unique. Because the levels are so bight and energetic in a way that only Japanese arcade games can be, and because they’re over so quickly, it’s easy to get into a comfortable rhythm simply grinding through each level with every single tank. It’s mindless (and the fact it’s played with a single analogue button and one fire button doesn’t help), but it’s genuinely entertaining.

It gets even better when a second player is added in. There’s no online multiplayer in Tank! Tank! Tank! but online multiplayer would have missed the appeal of this game – it’s in running around with friends and family destroying stuff in massive explosions. In fact, it’s downright hilarious, and it’s quite challenging. Playing the campaign with a second player ups the difficulty of the enemies, and even experienced gamers will be pushed with some missions. 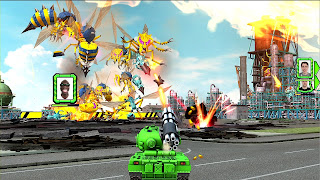 And it gets even better when there’s a third or fourth player joining in. It’s not possible to do the campaign missions with so many. Instead are deathmatch, team deathmatch and a co-op to take down a monster mode. Arenas are small, so deathmatches tend to be high-scoring, intense and close experiences. Co-op is so difficult with so many humans playing that the only way to succeed is to form some surprisingly complex strategies, considering how limited the inputs are.

And I’ve saved the best for last. There is a mode where the player with the gamepad takes control of a giant monster, and the other three need to take control of takes and take him/ her down. Oh, and thanks to the Wii U’s gamepad, that monster has the player’s face on it. Needless to say this mode and a few beers had my friends and I rolling on the floor in laughter.

On the surface Tank! Tank! Tank! doesn’t seem to have a lot of content, but it’s so eminently replayable, and there’s so many great multiplayer options that the initial impression is very deceptive. Of all the Wii U launch titles, this is the one that people will likely want to be pulling out at the end of the Wii U’s life span now and again for a quick bout of multiplayer fun.

Of all the Wii U launch titles, Tank! Tank! Tank! is perhaps the game that understands the concept of “fun” most of all. I can’t see how anyone could fail to get a kick out of this game.