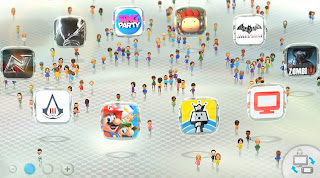 It’s been about two months since the Wii U launched. We’ve had some time to get ingrained in the Miiverse community. How has it stacked up as a social network, or a resource for gamers? Well, not especially well on either count.

Nintendo has succeed in creating a wonderful interface for Miiverse – it can’t be stated enough how much of a pleasure it is to use. It’s also has some great integration with Wii U games – I love being able to post screenshots directly from inside the game, and ZombiU’s use of it proves that creative developers will be able to get some great use out of that tight integration.

But Miiverse is a social network – a platform designed to enable people to interact around their favourite hobby. And it’s now obvious that Miiverse is in this regard a poor man’s alternative to Twitter.

For a start the community, though small (with some games I can come back to the community a day later to find my comment still near the top), is absolutely filled with trolls. For the mainstream games like Super Mario Bros U, people are generally positive, but head into a community such as the Funky Barn one and it’s filled with people with nothing better to do that post about how bad the game is, and make other comments about the game I can only assume are meant to be funny.

This would be fair enough if the people criticising the game had actually played the game. Most of them haven’t. Nintendo wisely included a way for people to tell if a person posting has played the game they’re posting about. A little box appears on their posts with a tick. As a consequence finding good quality discussions to participate in in Miiverse is, at times, about as much fun as pulling teeth – especially if you happen to be a fan of a game that is more niche in terms of appeal.

In the worst-case scenarios, such as the recent Rise of the Guardians game, the accusations of shovelware were flowing thick and fast… before the game was even released. It turned out to be a decent game, but I have to wonder whether this had an adverse effect on initial sales, and the community itself is often a very unpleasant place to be for fans of the game. I am sure that Nintendo’ s intention was to make these communities fun places for the fans of the game to meet and discuss their favourite games, but unfortunately the community is proving itself to be very juvenile right now.

Of course, these kinds of people exist on the other social networks too, and yet I can avoid them there. The problem is also the chief difference between Miiverse and every other popular social network out there. Pinterest, Twitter, Facebook and even Sony’s PlayStation Network and Microsoft’s Xbox Live – these networks are “opt in” in the sense that the user has to search out the people they want to follow and the conversations they want to participate in. Miiverse operates on an “opt out” model. Users have to actively block the people they don’t want to see, and this is a far less efficient model for the end user.

There are also far too many inappropriate comments going unmoderated for far too long for a social network that is meant to be family-friendly and I’ve already had numerous “wanna cam” friend requests.

Until Nintendo can get these issues sorted, Miiverse will be a social network largely without a point. Aside from the rather wonderful illustrations that some people have produced for their favourite games the Miiverse community is not an especially helpful place to ask for advice/ in-game help (the ability to hold conversations is severely limited by the 100-character limit), and nor is a particularly friendly community to kick back and discuss games. The ability to link to websites and the like is severely limited, for instance, and linking to interesting articles and the like is the single most important function that saw Twitter take off.

I really hope this isn’t another one of Nintendo’s “nice idea, failed execution” games – like AR and PlayCoins have proven to be with the 3DS. The idea behind MiiVerse is great, it’s a pity that the community has to try and ruin it.