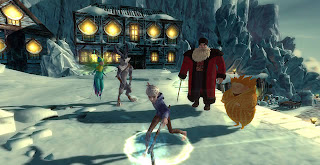 Rise of the Guardians was never going to be a classic game, but to look at the game’s Miiverse community you’d think this is the worst game since Ninjabread Man.

Ignoring the fact that most of that Miiverse community hasn’t played the game (a topic for a discussion on another day), it’s a simple reality that they’re wrong to be so hard on Guardians. Go into this game with the right frame of mind and it’s a heck of a good time, especially in multiplayer.

Through the game’s 10 hours or so in length players will take control of one of the characters from the film. Santa has a heavy sword, the Easter Bunny has a boomerang and Aussie accent, and the less amusing Jack Frost, Tooth Fairy and Sandman round out the team. It’s then a straight-up hack-and-slash game from start to finish. There’s some light RPG elements in customising each team member as they level up, and a gem system which acts as the “equipment upgrades” of traditional RPGs, but it’s such a backgrounded part of the game that players can set it the levelling up to be automated and then ignore it to simply focus on the action. 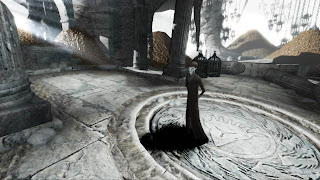 Each character has some slight differences in play style, and a range of special attacks that can be performed depending on how much of a power bar they’ve filled up. None of this is in any way unique for the hack and slash genre, and Guardians does not try and advance the genre in any way, but it does get the basics right. Combat is tight and dynamic (indeed, at times there are dozens of enemies on screen at a time), and though it doesn’t take long for the repetition to set in (there’s only really three kinds of missions to deal with) the basic action is quite therapeutic in its repetitiveness.

The game isn’t challenging, so as a single player game it does become brainless. Guardian’s real strength is in the multiplayer, where up to five players can team up to take on the legions of nightmares together. If anything the game becomes even easier when it’s not hampered by some very middling AI, but it is an absolute blast with friends around and a couple of beers in the fridge. Because it is quite a good looking game, it is engaging despite its simplicity, and it is the kind of game that parents can also enjoy playing with the target audience – the children. 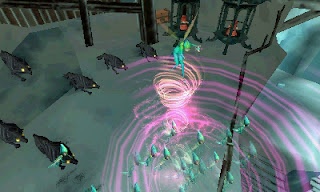 After finishing the main game you’ll unlock a couple of challenge modes, and these high score-chasing challenges are where the more dedicated gamers will have fun testing their skills. For most people the action will be far too much of a one-note affair to make this a long-term time investment, but remembering again that this game is there for the younger demographics, I can see this going down really well.

It’s also worth nothing that in a surprising way, Rise of the Guardians demonstrates how the Wii U GamePad screen can be used for a simple level map, but in such a way that it becomes vital to the experience. The game’s levels are filled with items to track down and occasionally some of the game’s paths are not immediately clear. The nicely laid-out map prevents a whole lot of potential confusion, and not having to open a menu on the game’s main screen to access saves a lot of wasted time. I can’t imagine playing the game on any other platform as a consequence.

And so, Rise of the Guardians will not be remembered as a classic, nor is it an essential purchase. That said, given how few games are on the Wii U right now and given how much fun this is in multiplayer, it is actually worth a look for genre fans.

– Matt S
Find me on Twitter:@DigitallyDownld
And also Miiverse: WaltzIT