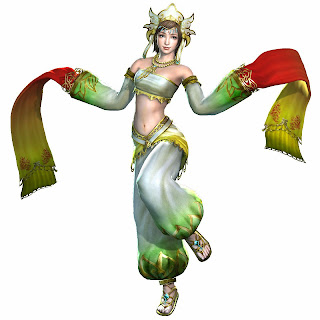 The port of Warriors Orochi 3 was a big deal for me with the Wii U. As a port of one of my favourite games of this generation on some shiny new hardware, it was the perfect opportunity to directly compare and contrast to the PS3 game, and get a gauge on just how powerful this new Nintendo console in in practice.

So let’s get the bad news out of the way from the start; the PS3 version is superior. Only slightly, but enough so that it’s noticeable. The Wii U is just not as capable of rendering as many enemies on a single screen as in the PS3 game. Rather than put fewer enemies on the screen (and thus reduce the action quality of the game) Tecmo Koei has instead opted to increase the pop-in of the enemy soldiers.

It’s quite pronounced, too, with enemies popping in literally only when they’re in range of your attacks at times. Once or twice I had trouble tracking down an important enemy commander that I needed to fight as a result. In the grand scheme of things this is not a game-breaking concession to the Wii U’s more challenging architecture for this kind of game, but it’s enough to knock the console down one or two notches in my eyes. 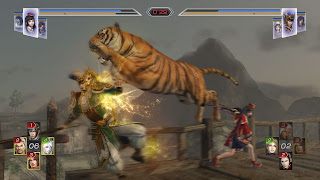 The game plays much the same way. Players are in command of three heroes at any one time, and these heroes are taken from almost every Tecmo Koei property in existence. From Joan of Arc (from the obscure Battlestorm) to Achilles (from Warriors Legend of Troy) to the mainstream Dynasty Warriors and Samurai Warriors games, there’s over 120 heroes to “collect” in this game, and players are going to happily develop favourite teams. Heroes play differently enough that it’s fun to play with each character, too. Even a couple of characters from Ninja Gaiden show up.

Given the sheer range on offer it’s a little disappointing that Tecmo Koei’s other great Warriors franchise, Fists of the North Star, is not represented, but that’s a minor oversight. Because most of these characters are historical figures, fans of history will get a real kick out of this character mash-up, building teams of their favourite heroes throughout history, even though the setting of the game is itself a fantasy one. 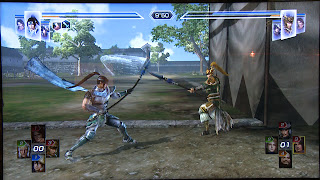 The game plays much like every other Warriors game, and on the Wii U GamePad, it’s a comfortable set-up. When the typical mission results in the deaths of over 1000 (if not 3000) peons, the soft buttons of the pad are nicely ergonomic, and the port’s greatest weapon can be found here too – the game streams perfectly to the GamePad’s screen. There’s only the rare instance of slowdown despite running two screens at the same time, too – a feat that makes the other technical concessions almost forgivable.

It’s possible to play the game with the TV turned off as a result, and indeed I preferred playing the game on the GamePad in the longer term. Local two player gaming has always been a problem with the Warriors games – it’s always been nice that it’s there, but losing half the screen to another player makes the experience a bit of an eyestrain for everyone. Not so for Warriors Orochi 3 Hyper. One player gets the whole TV, the other gets the GamePad screen. It’s by far the best local multiplayer the series has ever seen. 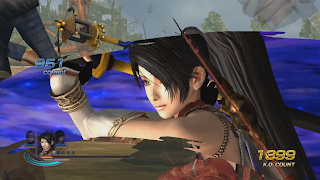 There’s one other feature in Warriors Orochi 3 Hyper that is actually quite a lot of fun. It’s possible to take your team of three heroes into a direct, 3-on-3 arena battle with other teams. Given that the combat system is not as complex as a typical fighting game, there was the potential that this would be a dull experience indeed, but Tecmo Koei has spiced it up nicely through the use of ‘cards.’ A player can bring up to four cards into battle, and these have a range of effects, from upping a heroe’s attack (at the expense of his speed), to giving attacks a certain element (electricity etc) for a time. Making effective use of these cards makes for some nicely strategic battles, and because there are some great rewards on offer from playing this mode, there’s good reason to head into it.

All the other features from the PlayStation game have also made the cut, and there are a handful of new heroes to win over. As a package, Warriors Orochi 3 Hyper is the most comprehensive edition of a truly great game. If only the minor technical issues weren’t there, this would be a strong contender for the finest Warriors game ever.