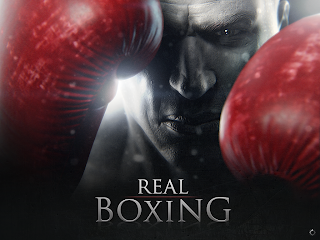 Bringing a real pugilist feel right onto your iOS devices.
If Vivid Games’ Real Boxing is anything, it’s perfectly named – trading punches in the ring feelsfluid and authentic on the touchscreen – but it’s got far more than just that on offer here. From its fantastic visuals to its cool motion control alternative control scheme, this iOS boxing title stepped in the ring to throw the knockout punch.
Over the past few months, I’ve been overly impressed with the numerous ways I’ve seen developers effectively implement intuitive control schemes into touchscreen controlled games and Vivid Games is now on this list too. Trading punches here is as easy as ever with the jab being performed by a single touch of the screen, with horizontal and vertical swipes throwing the hook and uppercut; what side of the screen is touched determines which hand is used to punch with. The only two onscreen buttons here are used solely for defence: block and dodge. This control scheme is simple and intuitive which keeps your head in the fight, instead of doing just that (fight) with the controls, like we’ve done so many times before with early iOS titles.
It’s not all duking it out with a wild flurry of punches though, as that will find you face down on the matt. Instead, you’ll need to time your punches wisely, whilst blocking/dodging to rest and regain your stamina in between your attacks. Counterattacks are devastatingly effective here – a perfectly timed dodged attack initiates a brief cinematic slow motion camera pan, which gives you an extra second to pick the perfect counterattack to (hopefully) stun your adversary. Land the counterattack and watch your vicious blow rock your opponents’ head (and oftentimes entire body) backwards in another brief, but brutally effective touch of cinematic camera action. These punches don’t just have a chance of leaving your opponent stunned for an easy knockdown either, instead they deteriorate his face with bruises and cuts too – making the feel of the title just that much more authentic. 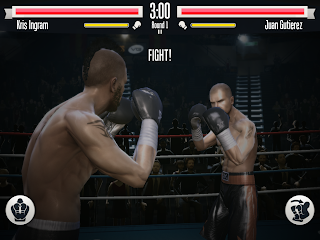 It’s not all camera trickery though, seeing how the fighters have a picturesque appeal to them thanks to the power of the Unreal Engine. While they do move realistically, things aren’t quite as fluid as what we would find in EA’s Fight Night series. Still, this is a mobile title and Vivid Games definitely impresses with what they’ve done here. Even the sound is top notch, with great fight commentary throughout each bout and pumping hip-hop beats in-between them.
There’s a full Career Mode that has you climbing the ranks of increasingly challenging opponents, with a few title belts to grab along the way. If pressed for time though, Quick Fight has you swingin’ your fist in no time at all when you just want to grab a little action on the go. But there are also online multiplayer bouts available via Game Center too. In our test, we were connected with opponents and in the ring within 10-15 seconds and the fights were completely lag free. The only issue I had here was that my character wasn’t maxed out like the other opponents and I found myself beaten and bloody in a pool of my own blood pretty quickly (a personal issue, not a gameplay issue).
Just as in the Fight Night series, your boxer starts off relatively weak and by using your cash earnings you can either buy new threads, tattoos, haircuts etc. etc., or spend it to allocate extra attribute points to your fighter. You don’t have to spend your cash here though, because you’re allowed to train in three simple minigames at the gym every so often to, which will also increase your stats. Still, I found it was worth it to strengthen my fighter with my earnings, because the opponents get tough very quickly in the Career Mode – let’s not mention how tough they are online again. 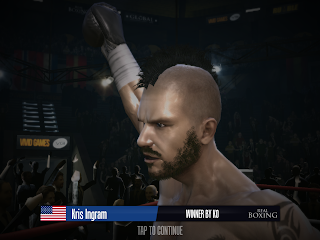 Lastly, Vivid Games threw in an unexpected gimmick that’s quite fun to play with if you’re using an iPad (2rd Generation and higher, because it requires a front-facing camera): motion control. By standing your iPad vertically (I used a few pillows on my bed) and getting your body within an onscreen outline, you can use your fist to swing punches within the game. Thing is, it actually works for the most part. While you can use your iPhone (4S and 5 models only), the small screen size makes things a bit more difficult than with the iPad. In my playtime, the motion controls weren’t used as my primary control method, but they’re still a fun novelty that I’m glad was implemented into the game.
When you entitle your game “real” anything, you better have the goods to back it up and Vivid Games does just that with Real Boxing. Bringing an authentic boxing feel and a whole lot of awesome cinematic flare to your iOS devices, it’s time to strap on those boxing gloves and hit the ring – this is one fight you do not want to miss.