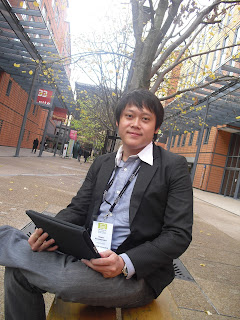 If you want proof that the games industry is increasingly becoming a global one, take a look at Corecell. A small development team based out of Thailand, the company has successfully worked in localisation, while also releasing its own product line.

It’s truly inspiring to read these stories. The more that developers outside of the US, EU, Japan and Australia are able to produce content, the greater role the games industry will have in society. As a means of artistic expression developers will be able to convey culture to a global audience, and in turn hopefully enact a positive response in society.

We sat down with the founder of Corecell, Noppon Wannapensakun, to talk about the history of Corecell, the challenges the company has faced working out of a market that has a fledgling games industry at best, and what’s next for the team.

Digitally Downloaded (DD): Can you give me the history of Corecell? How did the team get started?
Noppon Wannapensakun (NW): Corecell was established by myself in 2002. We were the first mobile game developer using J2ME (Java) in Thailand. I started the company with three friends who graduated with me from Computer Engineering at Chulalongkorn University. I personally love games – I played a lot since I was young such as Mario, Final Fantasy from the days of the Famicom.

During that time J2ME was a big challenge for everybody to enter the mobile game market. Because of the hardware limitations of the platform I thought it would be a big opportunity for us to make games that could compete with big companies. Our mobile games were some of the best-selling mobile games during that time. I am especially proud of our RPG game, which all written in Thai language. We sold almost 60,000 copies that time, which was good for small team like us. However, deduct the advertisement and operation costs, and it quite not enough for us to survive with the leftover money.

Our hope was that the market will get bigger every year and we would also grow from increased market capital. I was wrong. As I was very young and don’t know how to do business, I made many mistakes and could not see that the mobile market here going to collapse very fast. After some players came here to dominate the market with big marketing budgets and cheating users by auto-subscribing them to monthly services when they downloaded something, the market was completely destroy just in two years.

My friends decided to left company and during that time Corecell was in debt from advertisement costs in 2006. In the same year , I met Yan Marshall from Sanuk Games. He is my good friend and good business partner. We were able to do many Ubisoft localisation projects together on the Nintendo DS and GBA platforms. After working for hire for two years we learned many things from working with the likes of Ubisoft and Eidos.

And then I thought it is a time for us to develop full production games. We started to sell our own titles since 2008 while also maintaining the work-for-hire business.

DD: What are your goals at Corecell?
NW: Our Goal is to be a game company that can bring high quality games to the market. And also bring innovation to game industry. In the long term, we want to be a company like Capcom, Square Enix and Take Two

DD: Thailand is not the most well-known nation for game development. What challenges have you found in setting up a development company there? What is the development community like in Thailand?
NW: First of all, I born here so I have to do something here for living, right? In the games industry, yes, Thailand is not well known, but if you see another creative industry, such as advertising, we are number 1 in Asia, and that helps us find the right skilled people to work for us.
Thailand’s development community is not big but it is getting bigger every year. You might see Thailand is another hub for creating games in the next few years.

DD: Many independent game developers are working on mobile platforms, but you seem focused on console development. What has encouraged you about the Wii and PlayStation 3, in particular?
NW: We’re not planning to stay focused on console development. We will have mobile/ Web products coming out soon (mostly for SE Asia market), as we did start business from my belief in mobile games. When we started to develop our own technology and it just happened to start with console platform.

DD: What are your thoughts about the new and upcoming “next generation” consoles, such as the Wii U and PlayStation Vita?
NW: It is necessary for console industry. As players are becoming bored from the old game consoles, they now want something new that can initiate a new push for the the industry forward.

DD: You’ve developed your own game engine, COREUS, and you do a lot of outsourcing work. How important is this part of the business to Corecell?
NW: As Corecell started from scratch here, outsourcing work is important for us to feed our living. However, we plan that in the next five years, we will have strong IP enough for grow our team and we can live on our own IPs. The COREUS engine is one of our plan to reach that goal.

DD: You’ve released games at retail in the past, but your PlayStation 3 releases have been for download via PlayStation Network. What value do digital download mediums bring independent developers?
NW: I believe that the digital download will dominate the market in next few years. When the next generation of children who live now with downloading Apps from iOS/Android grow up, they will not give the same value to retail that the current customers will. So, our strategy is just to make ourselves ready for upcoming market.

DD: As game development costs are increasing, what can a small developer do to remain financially viable?
NW: It is not easy to stay alive in our game industry during this era. As our team can still use money from outsourcing work to produce our products product we have one way of staying alive but of course that you might develop some very strong headaches by running around finding projects like those to work on, and you might not have time to be thinking about your own product.

But yes, in order to survive you must have something above your own games. At Corecell we create our technology, and have built a professional team which when compare to the competition makes us the one of the best choices.

DD: What games and game developers inspire you, and why?
NW: I love many games, if I have to select, I might think about New Super Mario Brother 3 (SNES), Final Fantasy 6 (SNES) and Silent hill (PS1). So, there are three companies which really inspire me; Capcom, Nintendo and Square Enix. With regards to the current companies and games that make me feel that I have to work hard to compete with them, I’d point to, Skyrim (Bethesda), Capcom again, and GTA (TakeTwo)

DD: What advice do you have for anyone who is looking to get into game development?
NW: If you are inspired enough to think that it is the thing you will do for living, welcome to game industry. Of course that game industry is full of opportunity for winners who can hit the jackpot but at the same time there is no room for everyone to be a success.

But don’t let that stop you from trying; let’s ride this roller coaster together!