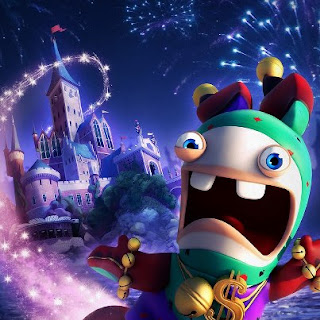 “Cute but psycho; things even out” is about the most apt saying that can be applied to the wonderful, and darkly humorous Rabbids franchise. Whether you are a fan of the TV show Happy Tree Friends and Friends, the card game Killer Bunnies, the daily comics of Richard Larson or movies like Death at a Funeral (the UK one); you know what I’m talking about when I say that dark humour has the deep potential to make people laugh harder, longer and reach audiences in ways nothing else can.

And so, with the unapologetic richly dark sense of humour that truly puts it in this same class, the Rabbids make their uniquely insane entry onto the Wii U, and as usual it’s a minigame compilation.

Rabbids Land is a game in design that is very similar to Mario Party. For those unfamiliar with that series, the game basically plays as a giant interactive board game, where a group of your closest friends come together to enjoy each company, and beat each other to pieces. 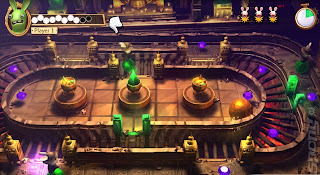 The basic goal – be the first to win a set number of trophies. Taking turns, you navigate around the various tiles of the board, and upon landing on its spaces and following the instructions. Spaces have varied importance and can either be helpful (launching you into mini games or granting presents), or sometimes harmful (stealing your hard earned trophies). Thankfully, for easy access to the game, the options and menus to wade through are never taxing and it’s that easy to learn, hard to master gameplay that is found in only the very best real life board games.

Gameplay is generally enjoyable. The real reason that so many people do enjoy these style of games are for the co-operative or competitive mini-game that offer a huge range of bite-sized gaming experiences. With the Wii U the game does that magic word – asynchronous gameplay – and is yet another example of the different kinds of experiences that the Wii U offers. 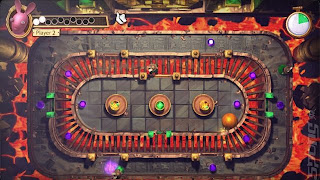 With these games one player controls the gamepad and will utilise every hardware option available on it whilst the other has a Wiimote and will play the games in many familiar ways. It must be said it’s disappointing that not all four players can join in on the action at once with this game. Asking two players to sit and watch does get tired quickly and hurts the game’s appeal as a multiplayer party game.

Outside of the mini-games, Rabbids also features a range of games of chance, silly quizzes (one of the question was around the volume of snot an average human will consume in each day) and much more. With a good amount of unlockable content, Rabbids does hold significant gaming appeal for most ages – although the dark humour may put parents off giving the game to the really young children.

While you have to question whether people would be looking for another multiplayer party game after Nintendo Land, Rabbids adds a much needed personality game to the Wii U launch titles and will make people very happy come Christmas time.

Developing from the frontier: An interview with Thailand’s Corecell