Ragnarok Odyssey is what the future of portable and social gaming should look like.
Let’s start this review off in the right way – shall we? I’ve struggled with how to write this review for a few days now, but I’ve decided that a review that tells you aboutRagnarok Odyssey and how it isn’t just a Monster Hunter clone just isn’t going to fit the bill here. Why? Because what we have here is a game that has its fair share of flaws, but it’s also a title that gets things right that even the so-called “industry leaders” can’t seem figure out with all their focus groups.
Let’s get this over with straight out of the gate: Ragnarok Odyssey is not Monster Hunter. Yes, it has its similarities and it was obviously inspired by it, but it’s in no fashion a clone. If we’re going to play the ‘this game is like another’ game, then Odyssey’s battle system feels more like Ys Seven than anything else. The button mashing battle system here is fast paced and fun, instead of weighty and strategic like what’s found in the Monster Hunter franchise. The similarities between it and Monster Hunter lies in the game’s mission structuring, seeing how both titles allow you select missions and then head out to take down all sorts of (sometimes enormous) mythical beast. Now that we’ve gotten the obvious out of the way, let’s get on with the review. 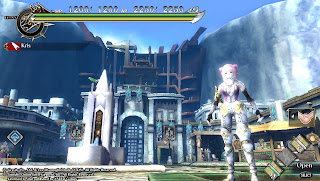 Ragnarok Odyssey is very Japanese. For those of you that don’t follow Japanese culture, personification is a traditional way of viewing life and it roots deeply into their gaming culture; this is one of the concrete foundations that Odyssey builds itself upon. A deep character customisation system is found right from the start, with the wide range of faces, hairstyles, skin colours and voices to choose from, as well as six player classes (e.g. Sword Warrior, Assassin, Cleric, Hunter, Hammersmith and Mage), each coming with their own unique outfits that come in four colour variations. But every item you acquire from killing beast or found in boxes can be used to further adorn your character too; new outfits and headgear, ranging from cool armour headgear to silly things like a paper bag with a smiley face inked upon it – this is your in-game persona to mould into your liking and I truly connected to my character here, because she’s (yes, she) is my creation.
The personification aspect plays even further into the game’s structuring, seeing how it’s cleverly crafted into its character growth system too. Instead of the typical levelling system found in most action RPGs, Odyssey completely changes the formula and weaves a card/ outfit hybrid system together, that’s a little confusing at first, but found to be quite versatile once you come to grips with it. See, weapons are found a plenty and they can be strengthened at the local blacksmith to increase their stats, but your outfits (armour) can be expanded by a tailor as well. This allows your outfit of choice expanded slots to equip trading cards, which can be found during play or bought/traded from the central fort (the game’s main hub). Each of these cards features its own attributes that can improve your character’s base stats (some have negative effects that need to be weighed accordingly) and suiting up correctly before battle is paramount to survival. Will you need poison protection, or stun protection for the enemy type your about to hunt? You’ll need to play your cards accordingly. 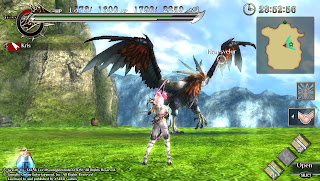 But this brings us to the standout social aspects of Ragnarok Odyssey too. All of the character customisation and trading is included for a reason – to enjoy with others. Vita’s Near communications allows you to trade items/ cards with others and you can then take the fight online with up to three players online, which increases the game’s difficulty accordingly. The matchmaking system here has a wide array of options to take advantage of to group together the right players (primarily broken down by chapters completed within the game, which also gives a stat boost) and there’s a fantastic set of communication options to enjoy here too: voice chat, typed messages, emoticons and actions.
On the right side of the touch screen, there’s a small tab that can be expanded when touched and it brings up the multiple communication options for quick use. It’s smart and intuitive, and most importantly – it’s effective. Odyssey makes you want to show off your persona and communicate with others, even if it’s just a quick bow and emote smiley after taking down a tough boss together.

In a world where gamers are known for cursing and berating each other on a daily basis (it’s happening right now as you read this), here we find a community that’s not following the norm and it’s because of how the developer designed the game. A few battles I played online had some major latency issues (the host had a poor connection and I intentionally accepted the quest for trial purposes), but so far, nobody has dropped out and we finished the quest regardless. You just don’t find this kind of tolerance anywhere else any longer! When you’re playing with a great connection and everything is working perfectly, Odyssey is simply charming and a standout title, regardless of what console it’s on. 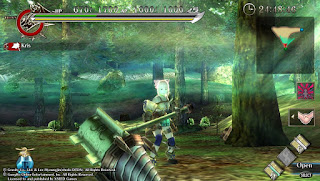 What makes it such a great portable experience though? Well, that’s the little things. Is there a massive overworld to explore? Nope. Is there a longwinded storyline to follow? Natta. Instead, everything is short and simple. The storyline flows from a stunning CG cinematic at the game’s opening and is then told through (mostly) optional NPC character interaction at the fort, where you’re also itemizing your character and accepting quest. Quests are evenly timed at 30 minutes and very few of them will ever take you half of that to complete. They all task you with finding/killing a certain amount of items/beast and you will see a lot of the same areas reused over and again – repetition is definitely at play here.

Again, this is an integral part of the game’s structure, seeing how you’ll constantly need items to get the next big thing you’re after. I’ll readily admit that the menu system could use some work, as it’s quite clunky. Controls are intuitive, with the touch screen only being use for communications and potions, not to mention the loading times are all but don’t exist. Heck, you can even change your class at will, so if you want a character with high agility and duel blades for now, but want to swing around a heavy hammer with a drill attached inside it later on, you can; you’re free to play how you want and when you want, and in my opinion, that’s a thing of beauty.

Ragnarok Odyssey is stunningly beautiful, offers an amazing customisable soundtrack and packs enough content to keep you busy for months. But it also brings the personification and social aspects of the Japanese people outside of its shores and challenges you to just enjoy having fun with your persona in a witty, action-packed social environment. Designed perfectly to fit on a portable platform, this odyssey continues wherever life might take you. Just whatever you do – don’t go on this adventure alone.
– Christopher I