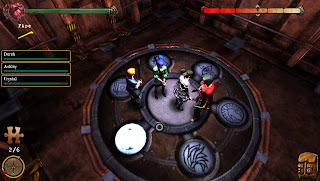 When the demo for Silent Hill: Book of Memories was released, I wrote with great enthusiasm about how great and important that game was, for both gamers and the Vita itself.

Having played the full game I need to revise down my initial impressions a little. That’s not to say Book of Memories is a bad game – far from it – it’s just that the game doesn’t quite manage to maintain its initial steam, and I found my initial enthusiasm for the game wearing down at a faster rate than I had expected for a game in one of my very favourite genres.

The problem is very simple; to be frank this is repetitive as all heck. Like most roguelikes it’s a grind (hah! Grind in a horror game, what an easy pun) down a stack of dungeon floors, all the time slicing and dicing through re-used corridor and room art assets. There is nothing inherently wrong with that structure, and in fact if you think back to the original Diablo this kind of dungeon grinding marries up beautifully with a horror theme. It’s just that some people don’t seem to like grinding out levels in RPGs, and in all fairness this game managed to tire even me down. 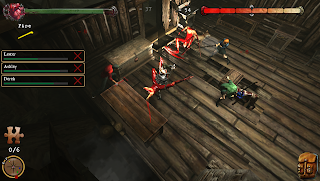 Assuming that this game is your cup of gory tea, there is so much to love about Book of Memories that, even if it’s not the kind of grind that will have you glued to your Vita screen for months on end (there’s Rainbow Moon’s Vita port to look forward to for that), it’s the kind of game that’s easy to come back to between other games because it’s a fairly low-engagement model for a game. It’s hard to forget where you’re up to in the game because the plot is such a light touch, and there’s no need to relearn controls or the like because they’re all very straightforward and intuitive. Yep – here’s a game where you can take a couple of months off, and easy pick up right where you left off.

The biggest win for the game is how well it works in multiplayer though. I mentioned Diablo before, and it’s an important comparison to make. Where Diablo is a gothic-horror themes descent into hell, Book of Memories is a Silent Hill-skinned take on Diablo. As Diablo was best played with friends, as is Silent Hill. Resources can be fairly limited and the difficulty of enemies scales fairly rapidly, so if for no other reason it’s worth playing with a couple of allies to reduce the grinding involved. Thankfully the Vita’s social features actually make it very easy to organise a game, so load up your friends list with people with this game and away you go. 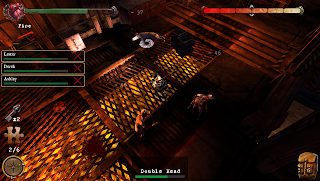 As with most modern dungeon hacks you have almost complete customisation control over your character. In addition to the standard levelling up process, characters become more proficient with the weapons that they use more of. It’s recommended that players level up their weapon skills fairly evenly because weapons also happen to break with alarming rapidity and there’s no guarantees that your favourite weapon type is sitting somewhere nearby ripe for the looting.

Because this is a Silent Hill game it’s nice to see that classic style return. It might be a top-down game this time, but the same sense of overwhelming decay is conveyed through the sickly colours and excessive rust or rot found throughout the game’s range of environments. The monsters are as grotesque as ever, and though the game’s soundtrack is simple (and unlike most Silent Hill games, persistent) it’s relentless in its moodiness. 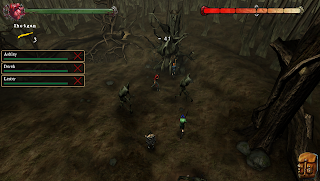 And perhaps that’s why Book of Memories wore me out. I’m the kind of person who can deal with repetitive action and combat – I enjoyed RAW for instance. What got under my skin ultimately was the unrelentingly grotesque show I was subjected to. This game loves its black colours it’s moody lighting and bleak landscapes. It might be impressively true to theme and it’s nicely rendered, but it’s just also a constant assault on the eyes. Most dungeon hacks only have short scenes in these kinds of settings.

These criticisms are more a warning to prepare people for a game they should still enjoy than anything else; this is a game for when you’re in a very specific mood, rather than a game to be enjoyed at any time. Like just about everything WayForward does Book of Memories focuses on getting the simple things right, but just keep a copy of Sun Flowers or something similarly cheery on your Vita as well. You might just want the break in mood.

Some interesting tidbits out of Square Enix