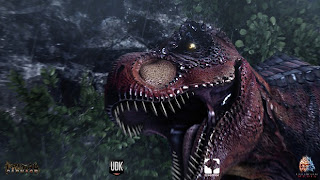 It is so hard to discuss Primal Carnage, mostly because it can be summed up in seven words: multiplayer deathmatch with one team as dinosaurs.

Right off of the bat some people know whether or not they are going to buy this game and no amount of criticism will sway them otherwise.

Of course, anything could be simplified down to several words; Call of Duty is multiplayer deathmatch with role-playing game elements, Super Meat Boy is hard platformer with a slab of meat as the player, and EVE Online is the game I will never play in my entire life (just as well, because play it and it will claim your life – ed). However, Primal Carnage falls into the special pit of being a very standard game. The game elements of Primal Carnage are very refined to the point that those elements outshine many similar elements of other games, but those elements are the bare-bones of most other games such that Primal Carnage doesn’t have anything to offer besides that main, extremely well-done gimmick. 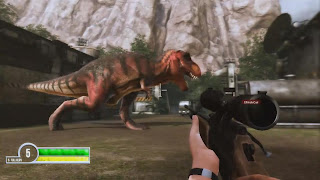 For instance, the classes of the game are very well-done. Despite the game essentially splitting the teams into experiencing two different playing styles, every class feels balanced and there is no team which automatically has the upper hand. On the human team, players choose between their five classes; the scientist, the commando, the pathfinder, the trapper, and the pyromaniac. While serving as a standard array of first-person shooter tropes (the sniper, the heavy, the scout, the infantry, and the pyro respectively), each class has a unique twist relating to their title. The scientist has darts which obscure an opposing dinosaur’s vision upon impact, the commando also serves as the demolitions class by wielding the only RPG-esque weapon in the game, the pathfinder can throw flares which blind dinosaurs, the trapper can immobilize or hinder dinosaurs with his net gun, and the pyromaniac also has a chainsaw along with his flamethrower and grenades.

Everything about these human classes feel right; weapon recoil is just perfect, the damage per second ratio of each class is balanced, and the special aspects of each class (along with different main weapons) really mesh into team tactics and can, used successfully, turn any match around. 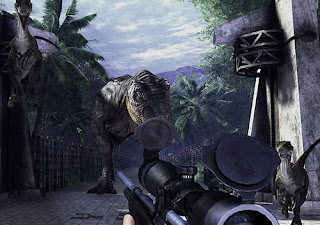 The Dinosaur classes fair the same treatment as the human classes have; each class feels tweaked to completely balanced and had at one point or another been honed under a microscope of perfection. The tyrannosaurus is a slow yet powerful human-killing beast, novaraptors are quick and pouncing animals that can immobilize players for a defenseless kill, dilophosaurus are quick and weak but can completely obscure a human player’s vision with their spit, pteranodons can grab players and drop them from hundreds of feet in the air while also outing the position of other human players to their teammates, and the carnotaurus is a more mobile and potentially more dangerous version of the tyrannosaurus. Every dinosaur feels as powerful and as mobile as they should be, especially when the opposing team has projectile weapons.

The map design also shines quite a lot. Ignoring one map which seems to be stacked against the humans because of foliage and an ever-present fog, each map feels very open and has strategic structures in place for both the humans and dinosaurs. Small areas allow the humans to avoid the bigger dinosaurs, but smaller dinosaurs can cause a large amount of chaos and confusion among those humans who do decide to camp within those areas.

The large areas along with the structures allow for dinosaurs to be at the height of their mobility while sacrificing the luxury of remaining out-of-sight of human players, specifically snipers. Another great addition to map design is the health and ammo refill stations. While engaged in either of these stations (the dinosaurs only get a health station), the player is completely unable to move their chosen class or their camera, leaving them wide open for attack. This means that in order to guarantee surviving while refilling health and/or ammo, teamwork is essential. 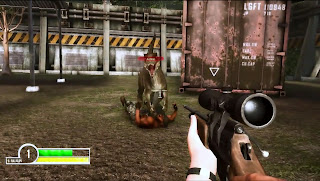 All of these aspects, the human classes to the dinosaur classes to the map design, all intertwine to make an almost masterful experience which few game come close to achieving, let alone those with a focus on multiplayer. Primal Carnage is easily one of the most meticulously structured games in terms of mechanic-balancing for both fun and fairness I have ever seen. If you do not mind the small amount of content within Primal Carnage, I cannot recommend the game enough.

However, the problem of very little content really does show itself in Primal Carnage. The gameplay can only be enjoyed base-value as the game contains no XP or levels to gain. There are a total of five game maps and one game mode, with no offline features or AI bot replacements available. I could only pick out one music track in the entire game, which continues to feed my theory that multiplayer games are cursed to forever not have any music composers attached to them. While there is promise of future content, it is still unreleased and not within our grasp.
Overall, Primal Carnage gets its base mechanics right; every class feels important and can be a valuable asset in the hands of the right player, with neither fun nor balance being sacrificed. However, the content of Primal Carnage can definitely be a deal-breaker, with many games offering tens times the amount of content for the same, if not lower, price-point. If you are looking for an extremely well-crafted first-person shooter or action-game deathmatch arena, then I cannot recommend Primal Carnage enough. However, if you want a Call of Duty-esque time-sink of a game which offers all of the bells and whistles along with an unending sea of replayability, this is not the game for you.