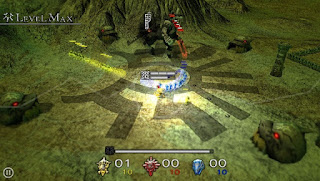 Orgarhythm for the PlayStation Vita marks the platform’s first major rhythm game. Well, perhaps its name lacks the branding value of a title like Theatrhythm Final Fantasy on the 3DS, but its quality and developer talent are certainly there. When you’ve got the folks behind games like Space Chanel 5 and Meteos, something has to go right.
And it did. Orgarhythm is a genuinely fresh experience – a bizarre mishmash of the strategy and rhythm genres. Indeed, this is a peculiar fusion – the rhythmic tapping of on-screen indicators isn’t primarily associated with longwinded strategic warfare. Thanks to some compromises, though, the two become seamlessly intertwined.
You’ll take up arms as a god leading a small pack of soldiers. Tapping your god in accordance with the on-screen indicators allows you to select an elemental attack to use against the various beasts that appear. Of course, this is where the rhythm comes into play. Tapping the screen in the appropriate spots to the beat levels up your units. This is essential for survival in the higher difficulty settings, as you’re sure to get rocked even with an army at the maximum level. In a similar vein, failing to execute your commands in compliance with the beat will drop your level and cause the army to deteriorate. What would be mere premeditated gestures in any other strategy title become integral to your success. 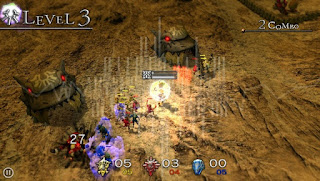 Boss battles spice things up further by requiring you to send units into multiple directions in rapid succession. It’s easy to get lost at first, having to send units everywhere while still maintaining your rhythm. In fact, you’ll probably have to die a couple of times to get a grip on a boss’s pattern. You can’t say Orgarhythm doesn’t try to be exciting.
It bears mentioning that the game is controlled entirely with the touch screen. That’s nothing new for the platform (even the Vita’s own interface is the same), but it does say something when retail-quality games are implementing this.
This does raise a problem with the game though; controlling allied units can be rather imprecise when leading multiple packs of elemental soldiers in different directions simultaneously. This is not so much a touch screen issue as a programming shortcoming. Occasionally, units will get snagged on walls, leaving your god (whose path is automated) unprotected. When this happens in an intense boss battle, the inevitable swarming of enemies can undo a level’s worth of work.
The few compromises I spoke of earlier are necessary to fully mesh the contradictory styles. The main difference between this and a 90s RTS game is that you have no control over your god’s movement path. The game is also divided into short individual stages to suit the length of songs. Lastly, your viewing area is reduced to a zoomed-in plane to allow for more hectic (albeit sometimes confusing) gameplay.
You won’t need to be a master tactician to have a good time. The game’s militia are based on the simple game of rock-paper-scissors. The rules get more convoluted as the game progresses (including ranged and close-combat weapons), but there’s a detailed tutorial to ease you in. 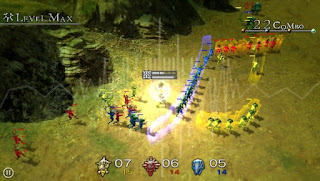 Orgarhythm’s lasting value may be called into question, given that the game only takes five or so hours to complete. There’s no real narrative to speak of, so you can experience all of the game’s offerings relatively quickly. While there is a multiplayer mode, I question how likely it is you’ll find someone with a Vita willing to play. Still, if you’re motivated by the quality of the tracks (and you should be), you can get much more than five hours. If you can justify that somewhat steep $29.99 USD price tag, there’s at least a lot to love.
Orgarhythm is ambitious, but it largely succeeds in merging two seemingly mismatched genres. While somewhat pricey at the moment, this amalgamation should motivate fans of either genre to give it a shot.
-Clark A

The Old Republic now free to play, gets 1.5 update