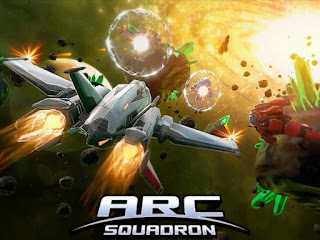 Psyonix’s sci-fi shooter blasts itself right into the top tiers of the iOS Marketplace.
There’s just something to be said about a developer that ‘gets it.’ What am I referring to, you ask? My reference is to when a developer truly understands the platform they’re developing for and perfectly optimises their game to fit what it has to offer. We’ve seen many an iOS developer shoehorn virtual D-Pads and control sticks into their games, with varied results. But Psyonix is a developer that’s carefully calculated the limitations and advantages of the platform and has designed its intense space combat shooter ARC Squadron in such a way that it is perfectly fitting for the touchscreen devices, by incorporating a simple, yet completely effective control scheme into play – strap yourself in, it blast off time!
Space flight is a glorious thing and it’s something we don’t get nearly enough of these days. While we recently got to chance to take to the stars in Galaxy on Fire 2, its simulation heavy gameplay is on the opposite end of the galaxy to the arcade action that’s found in abundance in the skies that the ARC Squadron flies in. The plethora of trigger heavy enemies found on this end of the galaxy shoot first and ask questions later, and at times it felt as if we just might have been strapped into the cockpit of a foxy friend of year’s past – the ultimate compliment to what Psyonix has created here, Nintendo’s Star Fox 64. 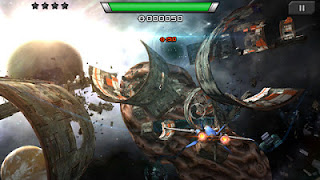 While light on the narrative and heavy on the action packed space combat, the gameplay takes centre stage here, and on this front, that’s not a bad thing at all. There’s a small sampling of a storyline that’s got us fighting off an alien race that’s hell-bent on destroying the universe, who are laughably known as the Guardians – giving us a reason to blast them into tiny bits of space junk. But we’re quickly blasted into the action, which is right where we want to be.

Putting the game into motion finds us looking behind our ship in forward scrolling on-rails levels. Instantly noticeable is that the game looks absolutely stunning on a Retina-enabled iPad, making perfect use of what the Unreal Engine has to offer to the platform. Gameplay is all about shooting enemies in rapid succession to achieve score multipliers, as well as swiftly manoeuvring your ship to collect small, cleverly positioned, score block that come along throughout the levels in the hopes to achieve four stars for each level.

The more stars you acquire for a level, the higher your numbered score will be which is in turn transferred directly into currency upon level’s completion. This currency can be used to purchase new ships with heavier armour and stronger weapons, as well as upgrade those that you already own. You can also purchase and upgrade secondary weapons as well, which range from homing missiles, decoy ships and even a defensive barrier shield to reflect incoming attacks back to where they came from. Upgrading is paramount to survival, because ARC Squadron is a tough game to master. Throughout the lengthy 64 levels of the campaign, the enemies become progressively stronger and without taking the time to upgrade, there’s no chance of survival.

Once levels start getting a bit too tough, you’ll want to head back to the lower tiers with your stronger ship to maximize your scores for extra cash and land those four stars in the levels that they were previously unreachable in – netting Game Center achievements along the way. This brings replay value in such a way that makes it not only necessary, but fun. Not to mention that there’s also loads of additional, minigame styled levels that pack on the challenge too, by tasking you with numerous things like not missing a single enemy, target or cube in levels that are constantly increasing in speed, among others. Last but not least are the awesome boss fights. These high intensity battles have us fighting all sorts of fully armed mechanised space dwelling robots that you definitely want to be prepared for before provoking. 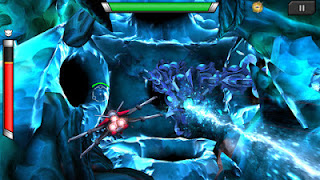 While the gameplay and upgrade elements of ARC Squadron are top-notch, it would all count for naught had it not been for its expertly implemented control interface.  Simply sliding a finger around the screen will move the ship accordingly – I recommend turning the sensitivity up to its highest settings – and putting an enemy in your onscreen crosshairs auto-fires your primary weapon. Secondary fire is performed with a single tap on the screen (upon enemies for some weapons) and barrel rolls are only a quick swipe of the finger away. While the auto-fire might seem unnecessary at first, you’ll be barrel rolling and manoeuvring around the screen so furiously that you’ll never think twice of it once the action heats up. It’s such a simple interface, yet one that’s expertly designed and implemented for touchscreen devices – turning the limitations of a touchscreen device advantageous – and is at its best when played on the larger screen of the iPad.
From the beautiful Retina-enabled graphics to the stellar, arcade heavy space combat action that’s on hand in ARC Squadron, Psyonix has expertly crafted an interstellar masterpiece that’s perfectly fitting on mobile devices, and one that’s right on the tail of another furry space pilot we’re quite fond of. Like space itself, Psyonix proves that mobile gaming is all but limitless when put into the right perspective. The ARC Squadron has a starfighter’s cockpit anticipating your departure – you’d be remiss to not strap in for this awesome ride!
– Christoher I

The weekly discussion: the most disappointing game you have ever played