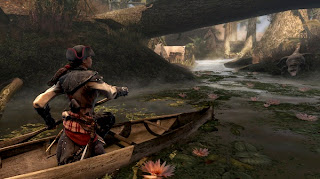 In my humble opinion it was bad timing to release Assassin’s Creed 3: Liberation at the same time as the PS3/ Xbox 360/ PC game. I get that the two games link together to help further Ubisoft’s virtual world, but the console titles did such a blockbuster job and set the bar so high that poor little Liberation never had a hope.

It’s especially unfortunate because there’s a lot to like about this take on the Assassin’s Creed universe – in fact in some ways I prefer this game. It largely does away with the silly “real world” back story. Almost the entire game is the lead character’s. Aveline is a very likable heroine, too. She has a strong sense of justice and oftentimes it seems like she’s more of a freedom-fighter than part of the Assassin community. 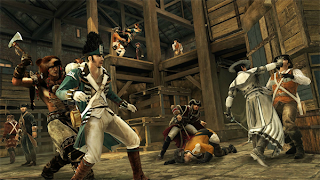 And where the “main” Assassin’s Creed 3 takes place in Boston, Liberation is all about New Orleans and nearby swampland. It’s a humid, wet environment, and it’s built remarkably well on the Vita hardware. It might not look as good as the PS3 game, but the atmosphere is as thick as the virtual flies that buzz through it. The city is alive and bustling, and as you’d expect from an Assassin’s Creed game, it’s a literal playground filled with things to climb, secrets to hide and people to assassinate.

Liberation makes heavy use of a “costume” feature. Aveline has three different costumes she can adopt; the “lady” is physically weak and can’t climb walls, but she’s able to bribe and charm soldiers and doesn’t draw as much attention. The “slave” costume is great for blending in and gathering information from slave communities (of which there are many such missions in the game). The “assassin’s” costume is the killing machine, but draws notoriety like a mosquito to dirty water. 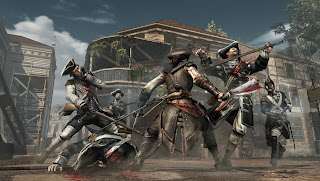 Making effective use of these costumes becomes an important way to both get around the city, and complete the more difficult challenges. It’s a lot of fun and quite an original concept for the franchise, which helps differentiate it somewhat from its bigger console brother, and goes a long way to convincing people to play both games simultaneously.

I wasn’t a fan of the multiplayer in Assassin’s Creed 3, but I am a fan of it in Liberation. This time around it’s a very simple world domination game – a little like a Facebook social game really. The (real) world is covered with “nodes” that players need to assign their team of fighters to capture. Once a battle for a node begins a clock starts ticking down. Whichever side has the most points (obtained through issuing soldiers to the node) at the end of that timer wins the node. Because these “battles” last for over six hours there’s plenty of time to play an instrumental role in winning a node for your side. Once one team wins all of the “victory” nodes (the most important ones across the map), it’s game over and a new game begins. 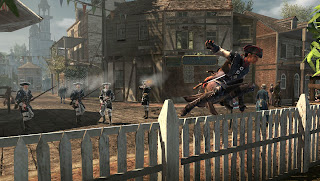 It’s very hands-off – players don’t participate in battles, or do anything more than direct their soldiers across the map – but because of that it’s perfect for on-the-go gameplay. If you’ve got a Vita with 3G connection, you’re in for a really good time with this game, because you’ll be able to whip it out for a couple of quick missions during lunch breaks or so on. It’s one of the most effective multiplayer games I’ve yet seen on the Vita, because it plays to the Vita’s strengths and is not just a simplified console multiplayer experience.

Assassin’s Creed 3: Liberation is compelling, overall, with an engaging story, a radically different hero to previous Assassin’s Creed games and a unique setting to explore. Unfortunately it’s not all good. The game was clearly built on a fraction of the budget of the “real” Assassin’s Creed 3, but the developers clearly had a mandate to do just as much with the game as Connor’s adventure. This means that the game regularly leaps far too high and falls flat on its face. The regular bugs can force restarts – the “lady” costume can swim (and leap into the water), but can’t climb out, because that would break the game’s rule that the lady costume can’t climb, for instance. 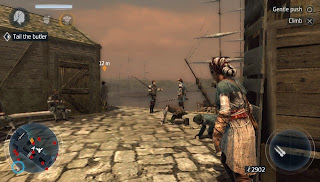 There’s balancing issues too to do with AI that is woefully inadequate in the game, even by the Assassin’s Creed series’ loose interpretation of “intelligence” in AI. Again to use an example with the “lady” costume; she can reduce her notoriety rating by assassinating people who witness her crimes. She can kill those witnesses in full view of other civilians and somehow those people won’t become witnesses themselves.

The little minigames that are built into the game to take advantage of the Vita’s hardware also largely fall flat on the face. There’s one where you need to discover a hidden message within a parchment by holding it up to light. To do that naturally you need to be pointing the Vita at a light source, but even after doing it a couple of times I have no idea what triggered a success. I simply pointed the Vita at a light bulb and shook it until it registered. These minigames are very infrequent, but they really dampened my enthusiasm for any mission that they were present in. Developers, listen up; you do not need to use every toy that you find within a console! 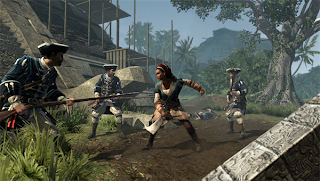 And it has to be said – the swamp environment outside of the city is just not that engaging. Sure there’s some crocodiles to wrestle and trees to parkour through but there’s also huge stretches of virtual land where there are no people. And Assassin’s Creed games need people.

To come back to my original statement – if Assassin’s Creed 3: Liberation had been released in a couple of months, it would have been a killer title for the Vita. People would not have directly compared it to the TV console big brother and people would have judged it for what it is – a really entertaining game. But releasing it at the same time as Assassin’s Creed 3 will lead to inevitable comparisons, and of course a game that was made for a fraction of the budget and for a console that isn’t quite as powerful as those home consoles is a formula that is going to end badly for the game.

The weekly discussion: East Vs. West!

The last thing we need next gen is better graphics