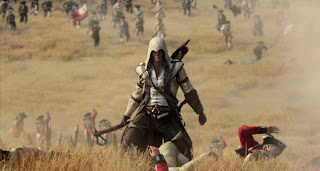 I was not a fan of the previous Assassin’s Creed game at all. That game was, like a Michael Bay film, loud, brash and thoroughly devoid of anything interesting behind its bombastic action.

So I was genuinely surprised to find that Assassin’s Creed III is more like a Joss Whedon film – big on the action, but also this is a game that is interesting beyond the superficial. For all my concerns; that this game had a tight development schedule; that we’d seen too many Assassin’s Creed games in too few years; and the potential for a lack of cohesion with multiple studios working on the game simultaneously, Assassin’s Creed III is a strong contender for the big-budget game of the year.

The change of setting helps wonders. By placing this chapter of the Assassin’s Creed franchise in an environment quite exotic by comparison to the European locales, Ubisoft have effectively found a second wind with the game’s plotting and character design. The American revolution is a fascinating historical subject, and it’s great to see Ubisoft continue to pepper this series with nods to real historical events; it helps to create a believable fiction around an increasingly silly meta-plot. 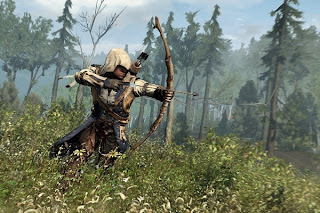 To be frank I still don’t like the jarring effect that the Animus and “genetic memories” concept has on the game. It feels increasingly contrived and more and more like a plot device rammed into the game to force players to behave in accordance to the game’s direction. Just as modern FPSers tunnel people from one encounter to the next, Assassin’s Creed pulls people in the “right” direction, telling them all along that it’s because the Animus wills it so.

But thankfully with Assassin’s Creed III that contrivance feels more backgrounded than ever through most of the game. Odd moment aside I was simply left to enjoy my time in revolutionary America, and I loved the game for that.

Indeed, just exploring the cities and wilderness of the large game world is entertaining. You can tell the developers did their research with this game; there’s mannerisms that are quite authentic, the architecture is gorgeously-realised, and the costuming comes together to weave a tapestry that would be hard to distinguish from a Hollywood period piece. 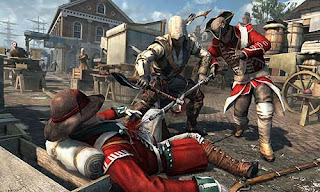 It’s easy to come up with a general approximation of a period in history and fool most people who don’t know better. When a game (or book, film or anything else, really), nails the little details right you know you have got something special. Within the first hour of play I realised just how much research went into Assassin’s Creed III. The gambling games, for instance, are all authentically recreated from the games that the American pioneers very likely did play. There’s a snapshot of the history of each board game, too, and a reasonable recreation of the kind of AI thinking that puts up a reasonable challenge. All for a couple of minigames that a lot of people will never even bother with.

It also helps that the characters in this game are especially believable this time around. The role of Connor Kenway is a real highlight, and is masterfully performed by Noah Watts. There’s a lot of wit to the script, but at the same time it takes itself seriously enough that there’s the odd moment that’s going to make you sit back and think about the ramifications of your actions. Because the characters are so engaging, the game is engaging. It’s always been a highlight of the series, of course, but this is by far the strongest cast in the series to date. 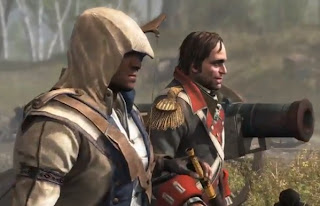 The setting of Assassin’s Creed III is also enhanced by the tools of the trade are delightfully primitive. There’s the standard toys of the series, such as wrist blades and now there are guns too, but the twist here is the firearms in this game are historically authentic; i.e. they take a shedload of time to reload. That opens up some strategically interesting and often tense encounters, while also mechanically giving players a chance when taking on a squadron of English soldiers. They’ll line up, firing-squad like, and fire all at once, but if you can get out of the way and survive that they’re in a great deal of trouble. There’s a couple of uniquely American weapons to play with as well, and this is, too, a nice touch.

The combat in the Assassin’s Creed games has gone from decidedly average to ridiculously easy, but here Ubisoft has struck a nice balance between tactical encounters and impact in the gun-and sword-play. Being overwhelmed by a unit of soldiers is a typical (and fair) result, given the game’s propensity for stealth, but at the same time, there’s a wonderful thrill in taking on multiple opponents simultaneously. Thanks to tight controls, brilliant parry system and explosive power of the guns there are typically a number of different approaches to each situation the game throws at players. Assassin’s Creed III provides rewards to players that play the way it wants them to, but as with any good sandbox game it’s often as much fun to break the rules as it is to play by them. 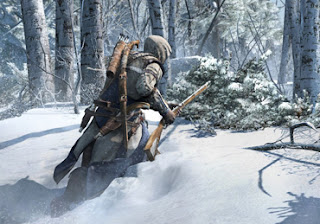 What is unfortunate is that there are some technical glitches that were always going to be hard to overcome with a game this ambitious. I experienced the occasional moment where I needed to wait for a second for the game engine to render my immediate surroundings. With most games I wouldn’t have even noticed, much less cared, but Assassin’s Creed III is so gorgeous that I wanted the game to be glitch free, because this is a game that I so desperately wanted to me immersed in. Reminding me that I am just playing a game bites far more here than it would in a lesser title.

I also have to express how disappointed I am that Ubisoft continues to insist on a multiplayer mode. With the many, many talented people they’ve got working for the company, Ubisoft has still only managed to come up with a multiplayer game that is adequate. It’s not bad – in fact it’s actually quite a lot of fun – but it’s also a waste of resources because it’s not a patch on some of the other multiplayer games out there, and it’s certainly not up to the sheer quality of the single player game. Some games just lend themselves better to single player experiences, and Assassin’s Creed III is one of those. It disappoints me that Ubisoft continues to throw a multiplayer game into a title that doesn’t need it for the simple, cynical, reason that “all games need multiplayer.”

But, thankfully, it would seem that the waste of resources by Ubisoft on the multiplayer was not at the expense of the single-player game. Assassin’s Creed III is the finest game in the series – a breathtaking open world title with a huge range of things to do and see, and not a moment of the game is anything but hugely entertaining.