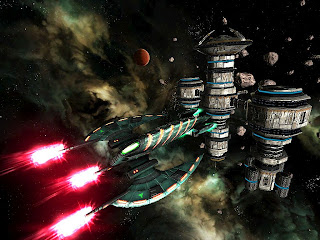 Galaxy on Fire 2 HD is a space flight/ RPG hybrid whose origins are remarkable – the conversion of a rather fun smartphone game into the expansive jungle world of PC. It’s stunningly beautiful, if slightly vapid in its storyline, and Galaxy 2 has a relaxing, elegant appeal about it. Whilst it has maybe missed a trick as it is geared more towards space flight bit rather than developing into a more interesting RPG, it is nonetheless a fine way to enjoy a few hours.

Galaxy takes you into the sci-fi world of one Keieth T. Maxwell, an unfortunate intrepid explorer who has suffered the misfortune of an engine malfunction resulting in a 35 year displacement in his time stream. Through his eyes, you begin exploring this new world and timestream. Sadly the storyline, whilst imaginatively silly, is left in its casual gamer roots and suffers a great deal of unrealised potential.

Galaxy has some truly remarkable features though. It is marketed, as indicated through its full HD feature heavily emphasised, as a graphically intense game. And it delivers in spades. It is hard not to be moved by the galactic environment as you move a ship through the space equivalent of the Swiss alps. It is hard not to get drawn into the bright lights of gas giants and the universal appeal of visiting distant galaxies; the excitement of exploring a newly refurbished space station and the challenge of avoiding the classic trap of inter-stellar travel – asteroids. To do so through Galaxy, is to do so in some style. 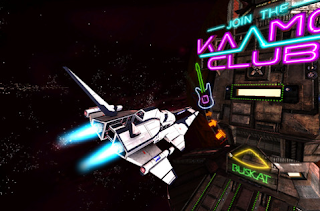 Sadly not all of its design features have enjoyed the tender loving care. The campaign feels hashed together at the last minute, the storyline remarkably difficult to get into. Unfortunately, the missions required for storyline progression hastily merge into one another resulting in a monotonous feel to the game. Indeed, the character of Keieth has little charisma and is hampered further by very hammy voice acting. Music needs a fair degree of improvement to reach passable but overall these features overall taint, rather then spoil, the breathtaking visuals.

Lamentably, there’s little that can excuse the interface, which is really very poor. In an attempt to leave the game as simple as the iOS game the port into the world of PC leaves it inexcusably basic. The Spartan approach combines with simplistic combat and poor, unintelligent AI to give an overall feel that the cockpit is distinctly lacking in buttons to press. The impact of this is that the repetitive gameplay feels even more so through this interface and Replayability, as a result, is not high. 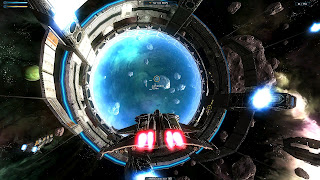 Desipte this, the game has a wonderfully large feel to it, with a great degree of freedom to explore where you will. Indeed it is often a case where the side missions outshine the main plot. Combined with features like substantial ship customisation options, Galaxy 2 is a chunky game behind the scenes. Controls are easy to learn and master, which allows for a very small learning curve.

Overall, Galaxy on Fire 2 is a mixed bag. Its breathtaking visuals and large, open space appeal marks it as a fun game, combining with an addictive simplicity to ensure its worthy of a try. However, it does have a few flaws in relation to gameplay, poor voice acting and storyline that limits its ability to keep a player hooked. To utilise a fishing metaphor: Galaxy of Fire 2 HD has a shiny lure that will ensure a number of bites over a couple of hours, but maintaining the hooked fish may prove too much for it to handle.

A new LA-MULANA trailer’s been excavated