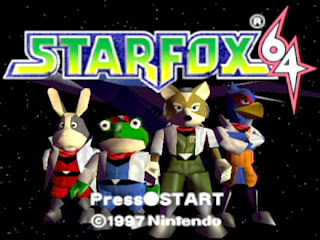 Star Fox 64 hit the 3DS not long ago, bringing with it some new voice actors, fancier visuals, and more splendour all around. However, the original on the Virtual Console is still a very competent package. It might not pack the same three dimensional “punch” but the core gameplay should more than suffice for the average player.
The game follows the story of the Star Fox team; a four man band of bounty hunters headed by Fox McCloud. It’s your mission to take down the evil scientist, Andross, who killed your father and is planning to unleash havoc on the Lylat System (the universe in which the game takes place). It’s simple stuff that works effectively as a backdrop.
The majority of the game is played in an on-rails fashion (essentially an auto-scroll often used in shooters). You’ll take control of Fox McCloud as you pilot your Arwing all around the screen. Your primary goal is simply to dodge enemy fire and return some of your own on your way to the big baddie. If you’re in a tight spot, you can whip out some Smart Bombs. These explosives deliver massive damage to multiple targets, but you can only carry a few at a time. You’ll also want to keep an eye on your health so you know when to fly through vitality-replenishing rings littered throughout the stage. Incidentally, collecting three gold rings expands your health bar for the remainder of the stage.
While all of this is occurring, your teammates will banter amongst themselves. Some conversations are informative and give you tips on how to pilot your ship, rendering the need to read up on the controls null. Other talks advance the plot or are merely comical in nature. The game is chock full of the cheesiest, most quotable dialog from the 90s era of gaming. 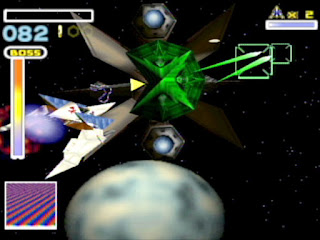 Occasionally, your ship will switch into “All-Range Mode”, which enables it to move around an area independently of the scrolling. This opens up all sorts of new manoeuvres for your ship; U-turns suddenly have meaning since they actually reverse the direction your ship is flying in. This mode is typically used for boss battles, as it gives you a superior amount of control required to deal with pesky bosses.
When all is said and done, the combination of continuous banter with engaging dogfights forms a rather cohesive package. Most of what you’re doing feels as if it has a purpose since your allies often request aid and compliment you for your work. In addition to offering praise and scolding, your team comes off as meaningful since thanks to its ability to take down enemies.  They’ll even disappear for a few missions if they run out of health, so you need to watch over them.
If you get tired of the single player campaign, you can relax with some competitive multiplayer. Unlike the main game, however, you can pick between the Landmasters (a ground-bound tank), Arwings, or even explore outside of a vehicle on foot. There aren’t too many stages to pick from, but the variety between the three modes of play should make them sufficient.
Like with fellow N64 shooter Sin & Punishment, Star Fox 64 is a very short game. What makes it worth playing again is the multitude of different routes you can take to reach the end of the game. You only need to play through seven stages to reach the ultimatum, but there are around 16 stages in all. Your route is determined by your actions within each stage, which encourages you to change up your deeds in every subsequent play-through. Additionally, there’s a normal ending and a true ending, so you’ll have to figure out which route will take you to the true battle with Andross. 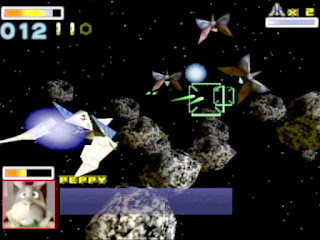 At the risk of sounding pretentious, Star Fox has less of a soundtrack and more of an auditory experience. Every character is voiced effectively and delivers the legendary lines in an amusing tone. It’s also packed with level-defining tunes that will send you crawling back to the game whenever you reminisce.
Time has been less kind to the visuals, but that’s not saying much considering the work put into them. The frame rate is very solid and rarely suffers from slowdown. Objects and the environments can look too polygonal for comfort in spots, but this is mostly just nitpicking. It’s not the prettiest game anymore, but the aesthetics still work perfectly.
Unless you seek optical grandeur or need your talking animals on the go, Star Fox 64 on the Virtual Console is more or less as outstanding as the 3DS remake. There’s more than enough content to justify the price tag for those willing to play beyond the end screen.
-Clark A