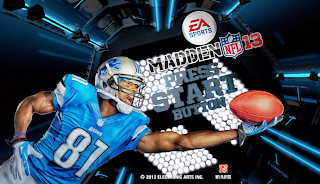 When a game comes out every single year, it is inevitably going to face some criticism.  Players quite often find themselves feeling fatigued.  They cite minor improvements, or small touchups as the only changes and have a tendency to feel that the publisher is making a quick money grab.  There is probably some truth to that – but while I have no doubt that many of the developers feel passionately about what they do, the games are made and sold for the purpose of making money.  The trick then is, to determine if the game is fresh enough, changed enough or simply good enough to pick up.
In the case of Madden 13, I believe the answer to this question is ‘yes’. Now, I am the target audience for Madden Football. I am a huge fan of the NFL. I watch my Detroit Lions play just about every weekend (including the disaster that was their 0-16 season). I have picked up Madden probably more than ninety perfect of its releases over the years, having spanned my experience with the franchise over several consoles ranging from the Sega Genesis, to the iPad, to the Xbox 360 and the various Sony PlayStations.
Probably my best run to date.
With that bit of disclaimer out of the way, I still had more fun with this year’s edition than I have over the last few.  The game is far from perfect, but considering what the team at EA is trying to do – they have come a really long way. There are a lot of gamers who feel that the yearly Madden release is little more than a roster update, much as many of those same players feel that the Call of Duty series is nothing more than new maps tacked on every year.
The thing is, NFL football is a cyclical product in and of itself. Every year the league banks on fans of the game lining up to watch a season play out, often with the flutter of hope that their team can win it all and give them memories to hold onto for years to come. There are indeed roster changes. Players retire, sign elsewhere, get traded and get drafted. Sometimes new teams are founded, new coaches are hired and new rules are put into place. This all plays into what the Madden games try to do, but this year the team made strides in a few unique directions beyond just the year roster updates.
The most heavily hyped change was the introduction of the Infinity Engine, which is a new physics-based engine that does away with the canned contact animations and uses a much more freely flowing style of play. I have heard quite a few people say that they do not see much of a difference, but as someone who has been staring at the canned Madden animations for over two decades now, I can tell you with certainty that there is in fact a difference. Now, it does not always work the way you think it should. I have seen some odd hits and angles get results I would not have expected. This is the engine’s first year of use though, and it looks like it has a lot of promise. I have seen some amazing animations take place as well – in fact far more than the oddball ones. For every oddly tripped player getting up from a pile of arms and legs post-play, I have seen at least ten much more realistic-looking tackles. 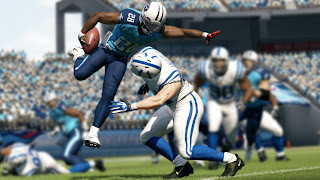 Another area of dramatic improvement? The presentation. This goes for the graphics used for updating player information and scores to the announcers calling the game.Last year’s Madden was horribly announced. Gus Johnson and Chris Collinsworth were badly timed when interacting with one another, and some of the things they said were simply broken and completely inaccurate.  That is not to say that the new team of Jim Nantz and Phil Simms is flawless, because oddities still occur. You will sometimes hear Nantz say the exact same thing two or three times in a game, and either one is prone to giving commentary that does not precisely fit the action. My most glaring instance was when Nantz ridiculed the opposing team’s quarterback for missing his wide open receiver with this pass. The problem with that? The quarterback was spiking the ball to stop the clock, not trying to hit someone on an out route. I also do not miss the sometimes seemingly random collection of rockers and rappers that made up the last several Madden soundtracks. I much prefer this year’s composed selection of music that reminds me a bit more of the NCAA football games.
The presentation could be better, however. Ever since NFL 2K5 came out, and we got a taste of halftime shows and weekly ‘live updates’, fans have been clamoring for more of the same. Given the storage space of discs now and the various telecast and NFL licenses involved, it really does feel like this kind of feature is long overdue. While the in game presentation has a nice, realistic flare to it and the between game generated Twitter/news articles are fun to look at, it does feel like there could be something more done on this front. There are some other nice touches though, like the already updated rosters and the ticker at the bottom of the screen (if you are online) that has actual real world news updates on it.
So, I have been over the bells and whistles, but how does the game and its various modes play out?  The action on the field is excellent.The Infinity Engine makes contact feel a bit more authentic and you definitely get a different feel from a quick, elusive back like the Lion’s Jahvid Best and a more bruising running back like the Falcons’ Michael Turner. The ability to try and put some touch on your passes and give them a slightly modified trajectory has been done in the past, but that combined with the receiver awareness does make the passing game a bit more flexible.  The development team has also stressed that this ball awareness not only applies to wideouts, but defenders as well. I have definitely noticed this, as you see fewer instances of random middle linebackers making blind interceptions, but every now and then you do still see a defender (and a wide receiver for that matter) getting their hands up in the air when it seems like they probably should not be aware of the ball’s incoming arrival.

Also, the physics can definitely get broken for a play here and there. I have the glitchiest safety in the history of the game, due to a quarterback trying to scramble and get rid of the ball, only to have the ball appear in the air, moving backwards along the ceiling, until it went out of the back of the end zone. When I looked the stats up on that play, it registered as a negative quarterback rush, stating he had run out of the back of the end zone to trigger said safety. Really, really weird play.

And here is that really awkward safety I mentioned.
Some terminology has also changed for longtime fans of the series. Things like franchise or superstar mode have been condensed into the new Connected Careers mode, which can be done online and offline. Essentially, it is the same thing – you are either coaching a team or playing the role of a player. What is nice about this is after so many seasons, I know I inevitably want to try something different – but seeing all of that work lost is a bit depressing. Now you can retire said player or coach and pick a new role for yourself and just carry on with the game in that current year and week. The online modes also seem pretty robust now, feeling like the single player game. For those who played the online franchise modes from the last few years, they know it was often a shell of the single player experience. I have some old buddies I used to play Madden with in high school and college, and we are thoroughly enjoying being able to get together again to play through a franchise mode together, despite all of us now occupying different zip codes. 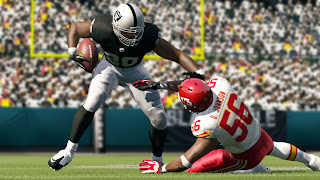 There is also a Madden Ultimate Team mode, which is like a collectible card game of sorts. The better you perform the more coins you can get.  With coins you buy packs of cards. You then assemble a team out of these packs of cards and play exhibition games against the computer or another player. This is not my favorite mode – I much prefer the depth of the Connected Career modes, but it is not a bad time killer in between league games.
However, when talking about modes and features, I would be remiss if I did not at least briefly touch on some of the things that are missing. You cannot import NCAA rosters into the yearly Madden drafts, a staple feature for many players over the years. I do not see any way to do a Connected Career offline with friends. Not a big deal for me now, because I can play online, but a few years ago that would have been really annoying. There is no fantasy draft option for people wanting to use that to start up a franchise either.  For me, none of these points is particularly bothersome – I didn’t purchase NCAA this year, I do not participate in offline multiplayer and I never found the fantasy draft option terribly compelling – but for some people these could be major concerns.
I would not mind seeing lots of this in the actual NFL season.
Will you enjoy Madden? It depends I suppose. If you feel like the yearly update is little more than a thin coat of paint and nothing more, then you may already have your mind made up. If a new physics engine and improved audio, video and online play sound like significant features and/or you have not picked Madden up in a couple of years, you may find that it is a very different game than you remember. If you are like me and a huge fan of the series, playing online with your friends and the NFL in general, this will probably be right up your alley.  I feel confident in saying that unlike last year’s misstep, this is the best football game I have played to date.