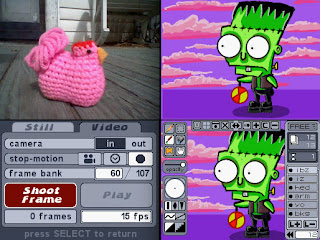 For some reason, the Nintendo DS and then 3DS has become a breeding ground for art applications. I get that these are stylus-driven consoles, but in every other way they’re really not good for art generation – the screens are small and low resolution, and the export options are extremely limited.

And yet there is Art Academy and Colors! 3D – both applications that do brilliant work within the 3DS’ limitations. And then there is Inchworm Animation. Which… doesn’t.

Now that’s not to criticise the ‘game’ for its feature set – Inchworm Animation is an impressively robust animation tool. It’s possible to work with multiple layers, there’s the usual onion skinning, opacity, cutting and cropping tools. There’s a full colour palette to work with, and it’s possible to export works to the SD card in very high resolutions. There’s even the ability to make stop motion and time lapse videos (though given the quality of the 3DS cameras that’s a dubious option at best).

So that’s the good – with enough skills you can make some technically impressive animations. And now for the bad: the interface is just hopeless. It’s about as enjoyable to use as a professional art program, with icons everywhere that make almost no sense unless you’ve worked through the academically-dull tutorials. 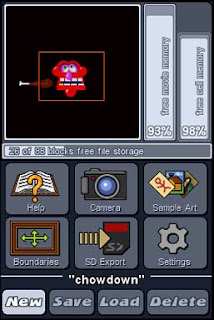 Though it’s possible to create massive canvases, it’s only possible to animate at 15 frames per second, and the weak zooming options means that you’ll unlikely ever make the professional-grade animations that the numbers would suggest are possible. There’s no sound options either – if you want to add sound to your movie you’ll need to export it to the SD card, import it to a PC video editing program and then record the sound to go with it.

Speaking of export options, there’s disappointingly few. You can export as a .bmp animated series of images or a .swf Flash file. Perhaps one or both of those are defaults for animation, but given Flash is on the way out thanks to Apple’s distaste for it and given .bmps are so clunky, it would have been nice to be able to export as either individual jpgs or a .mpg file or something.

It’s also an unrelentingly ugly program to use. Icons and menus look like they were thrown together in about a minute. Considering the beautiful elegance of Art Academy, or the sheer simplicity of Colors! 3D, this is a definite step back.

All that said, there’s some nice intentions here, but casual fans of art should stick to the pre-existing art options on the 3DS, and more serious fans of animation should consider a proper PC application for it. I struggle to see a genuine point to this app.

Cognition makes it to the top 70 on Greenlight