Capcom’s first main event crossover with Marvel Comics is about to see re-release on Xbox Live and the PSN. So, how’s it holding up? Pretty darned good.

Seriously though, did you expect it to have aged that badly? Sure there are some aspects that are going to look outdated compared to the fighting games of today, but Capcom’s stable of 2D battlers is one that always looks solid almost across the boards. They’re usually big, colorful, and chock full of great animation.

And personally, I’m thrilled to see this badboy again. I always liked the character choices in the original MvC. Any game that lets me play as Juggernaut gets an automatic thumbs up. 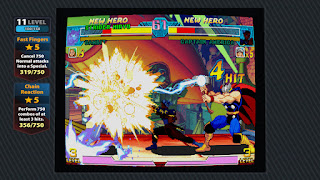 Look for Marvel vs Capcom Origins to appear on the PSN and Xbox Live some time this month.

Dust 514 Beta: leading the FPS race to the bottom