The creator of the classic puzzler Chip’s Challenge takes Chuck’s Challenge to Steam Greenlight. Can it stand out from the rapidly growing crowd and piece together a winner?

I remember Chip and his Challenges best from the Atari Lynx (Atari’s ahead of it’s time handheld), but the game has appeared on numerous platforms over the years including the Amiga, the C64, and even DOS and Windows.

Chuck’s Challenge is a little bit of a different animal in the sense that instead of starring a high-school nerd, it stars a little purple alien who’s hired puzzle master Chuck Somerville to keep him entertained with a series of mazes that he must figure out. Somerville, by the way, is also the actual creator of both Chip and Chuck’s challenges.

Meet Woop, just your everyday puzzle lovin’ purple alien capable of altering time and space. Woop has summoned all-round puzzle game legend Chuck Sommerville for one purpose – to create a universe of puzzles for him to work his way out of. Take control of Woop and help him navigate his way through level after level of obstacles and challenges that stand between him and reaching the exit portal. Shift blocks, find keys, flip switches, wade through water, hot-foot it through lava and do everything it takes to make it out in one piece and evade an army of hungry creatures who want nothing more than to turn our purple hero into a nice ‘n tasty Woop Sandwich.·         PLAY through dozens of brain tingling levels – extend the adventure with Chuck’s level packs!·         INTERACT with a universe of weird and wonderful characters as well as over 70 game elements including rubber dinghies and magnet hands·         CHALLENGE your friends in local split screen RACE mode·         CREATE & SHARE your own levels with the powerful level editor·         MASSIVE re-playability through the FREE WEEKLY PUZZLE and over 1000 user-created levels. 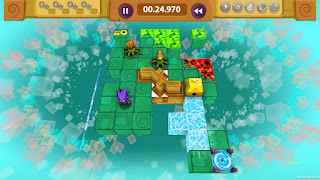 One of the game’s high points is that players can actually forge their own puzzle levels and share them with the audience at large. A very neat feature and one that Somerville is personally pretty excited about.

“A big part of Chuck’s Challenge 3D is the collaboration between players making & sharing their own puzzle,” says Chuck Somerville. “and we think Steam is a great place to expand the player community.”

If you’d like to support Chuck’s Challenge, you can add to the up-votes right here. If you’re just looking to try the game out, and you have an iPad or iPhone, you might want to click right here and snag yourself the free iOS version.