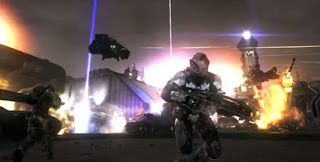 I’ve been messing around a bit with the Dust 514 Beta thanks for my PlayStation Plus subscription, and I really just have one thing to say about the experience: sigh.

I want to say from the outset that there is absolutely nothing wrong with the game: in fact, I’m having quite a bit of fun with it. Outside of the action there’s more than enough unlocks and loadouts to play with, and inside the game some of the maps have really nice designs. As someone who enjoys the challenges inherent with the sniper role within skirmish games, I’m loving the fact that some of the maps have some really great vantage points to practice my virtual killing craft.

The guns have a nice weight to them, and the thrill of a perfectly-placed sniper shot is present and correct. The atmosphere of Dust 514 is as great as you’d expect for a game set in one of the most popular MMO universes around.

But, there is absolutely nothing in this game that you won’t experience in any of a dozen other competent FPS titles. I am thoroughly sick of this me-tooing that the FPS genre is going through, and I have to say that I can’t see this genre surviving much longer in its current form. Back when likes of Call of Duty and Halo established the template FPSers with big-budget games that stood out from the pack in terms of both quality and quantity of content, and so people were willing to spend money on them – that’s why they’re such big franchises now. Those early attempts to funnel the formula down into a cheaper, budget game (such as the Modern Combat games), quickly die with no community around to support them, because the quality simply wasn’t there to sustain the most dedicated players.

It’s different now – there’s more knowledge out there on how to make these games, and it’s possible to develop a top-grade competitive FPS games and push it into a free-to-play model. It’s not just Dust 514 that is going to be supported by freemium microtransactions – there’s also the high-quality Blacklight Retribution and no doubt more to come. In terms of quality these games stand up well to the Call of Duties and Halos, and they will no doubt grab a portion of the audience for these games.

That’s going to make things difficult for Call of Duty and Halo, let alone the lesser of the traditional FPS games. Perhaps not in the short term, but longer term, who’s going to pay for a FPS when there’s a free one that’s just as much fun? We’ve already seen this race to the bottom happen in the MMO genre, with only World of Warcraft surviving as a subscription-based MMO in the face of quality free titles such as Guild Wars, Turbine’s MMOs and a host of others. And the result of that? When a developer such as Funcom with The Secret World tries to do something genuinely original, and premium-priced to support the innovation, the project fails in the market.

At some point, when you have too many people trying to walk across a frozen river, the collective weight causes cracks to appear and then everyone falls in. The likes of Call of Duty and Halo will need to try to do dramatically different things to try and keep up the massive sales numbers that are expected for those budgets (and likely alienate a lot of fans who “grew up” with these series’). As more and more freemium FPSers hit the market, the one or two per cent of players who pay for microtransactions becomes point-one and point-two of a per cent of players as all but the most hardcore of hardcore dip their toes into multiple free games at the same time.

In other words, the FPS will hit that tipping point where the genre goes from plentiful and a world of opportunity for every developer to oversaturated and a miserable time for everyone.

And I reckon that time’s going to hit sooner rather than many would like.