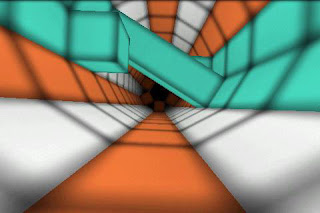 Imagine this: You’re a turtle, moving through an empty, white world filled with coloured blocks. If you can wrap your head around that, you’ve arrived at the dullest eShop game to date: SpeedX 3D.

Whatever regulatory body that looks over advertising in the games industry should rap developer, Gamelion, over the knuckles for false advertising: SpeedX 3D is anything but speedy (though at least the “3D” bit is correct). This is a racing game with no sensation of speed whatsoever. Courses are randomly generated environments of white squares and coloured blocks, and you move through them – even on the fastest gameplay setting – at a snail’s pace. I crashed once because I had genuinely fallen asleep playing it.

On the other hand, it’s probably for the best that the game is paced slowly because, thanks to the insane decision to have the game play from a first-person perspective, even on a slow pace a bit of motion sickness is likely. The environment is blurry and visually uninteresting. The courses are littered with coloured blocks. Some move, some are stationary, but they’re all blocks, and you’ve seen everything this game has to offer within, quite literally, a minute. Crash into a block and the game simply cuts to the “Game Over” screen. No spectacular explosions for this turtle, he just fades into a sweet oblivion when running into the deadly orange cube. Amazingly, while there’s no energy to the visual style the generic (to put it nicely) false-techno soundtrack actually outdoes the graphics in being completely uninspiring. 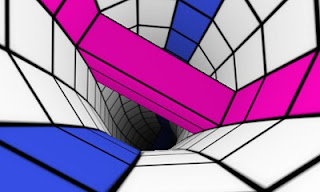 Strangely though, despite the slow pace SpeedX 3D can be quite difficult. If the motion nausea doesn’t get the better of you, and you manage to stay awake, the horrific controls will hit you hard. Turning around in this game is like pushing through that water. And you’re driving through this water mostly blind, to boot. See an object in SpeedX 3D? Well, thanks to the horrible pop-in, you’re probably not going to be able to react in time to avoid it. Gamelion tries to help players out by projecting where the objects are going to pop-in to the race track by highlighting on the floor with the same colour of the incoming object, but here’s a wild idea – if the game controlled well players would be able to help themselves.

There’s four different gameplay modes, but it’s a real stretch to find any substantial difference between them. The “levels” mode has a finish line, the “endless” mode finishes when you hit an object. It’s not like one is more enjoyable than the other. 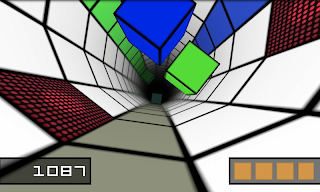 I’m not going to give this game the respect of any further words, since Gamelion clearly went into developing this one with no respect for gamers. We’ve seen some generic trash on the eShop before, from cynical developers/ publishers that have figured out the eShop is so unsupported that any release is going to get airtime. Gameloft’s and Circle, with both Let’s Golf and that Blackjack game are two examples of horrible, derivative publishers. Gamelion has successfully hit the bottom of that barrel with SpeedX 3D, which is, I guess, a feat in itself.

But at least that Blackjack game had pretty anime girls, and the golf game worked. This one has absolutely nothing.