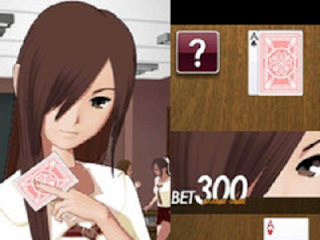 Let’s kick this review off with three warnings: Warning #1: there was no hype to this game, and Nintendo has tried to bury it in the eShop. Warning #2: It’s by Circle, who has become the new Gameloft in terms of shoddy ideas poorly executed. Warning #3? This review, because you really, really should not play Sweet Memories: Blackjack.

It’s an utterly baffling game that is broken at the very conceptual level. The problem with this game is a little to do with the fact that it’s all about a rather dull game in Blackjack, though this is one of those rare cases where the gameplay isn’t the main problem. Yes as a video game Blackjack rarely works, because it is as simple as gambling games come and unless you’re investing real money there’s not much rush, excitement, risk or reward to the game, but I don’t want to be unfair to Blackjack, because unlike Circle’s programming, Blackjack isn’t a broken game in itself – as simple as it is, it can be fun.

The real problem with the game is the utterly confusing girls that occupy the left hand screen (you play this with the 3DS in “storybook” position on its side) as you play. Circle must be fans of Love Plus, and decided to take the idea of innocently pretty girls and stick them within one of their own games. The aesthetic design of the games visuals and sound is a little reminiscent of Love Plus, in a cheap and poorly done fashion. These girls appear in different scenarios depending on the time you’re playing with them. During the day they’ll be standing around school. At night they’ll be in bed. They’ll utter a few catch phrases and look coy as they win or lose. I just can’t figure out for the life of my why they’re there. 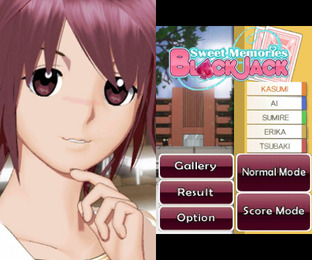 And that’s where Circle’s grand idea collapses completely; there is no reason whatsoever for these girls to exist in the game. They might sound cute as they natter along in Japanese, but there’s no story whatsoever in this game explaining who they are and what they’re doing. So why you’re in the girl’s bedroom at midnight throwing cards back and forth will remain a mystery to the ages. It’s also a little unsettling.

You’ll start off with access to just one girl, but as you impress her (win lots of money from her) more girls will be unlocked. I say “unlocked” because while dating games like Love Plus work very hard to instil a real sense of personality into the characters, Sweet Memories’ empty mannequins are little more than a progress bar towards game completion. There’s also achievements built into the game for pulling off impressive feats of sheer, blind luck (because as anyone who has played Blackjack knows, there’s not much skill involved in this game), and those achievements also unlock gallery images.

Those gallery images offer a little innuendo, but that’s about all the sex that appears in the game. Circle couldn’t even get that right – if they were indeed basing the game and its characters on Love Plus, then the sexytime is counterintuitive to the idea that this is meant to be about romance. Or, alternatively, if Circle did want to make a sexy game, where the hell is the strip Blackjack option? The game design is layer after layer of mixed messages. 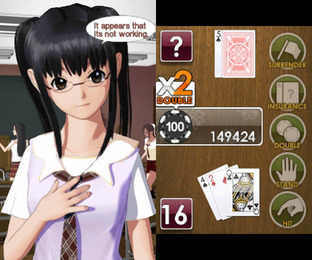 The gallery images can’t be exported in any way, either, meaning you have to turn the game on to view them. It’s also worth noting that while this is an eShop game, it’s not in 3D. I suspect Circle would have made this a DSiWare game, except the file size is much too large (voice samples chew up those MBs). But, again, if you wanted people to care about these girls, guys, giving them an extra dimension would have helped.

Blackjack itself is not such a bad game, and in fairness Circle has programmed in a working version of it. The problem with Sweet Memories is the simple fact that it is so damned confused about what it’s meant to be. Throwing random digital girls with no personality and no story into a Blackjack game that is and isn’t trying to be sexy doesn’t really make for a cohesive experience.