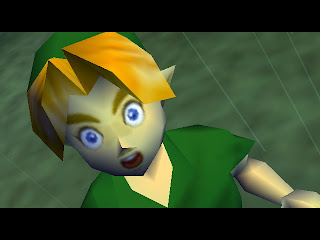 Genres are a useful tool for developers, critics and consumers alike. Simple words are – through the power of thematic and stylistic associations – capable of describing a game that we may never have even seen before. A simple, single word – “platformer,” “rhythm game,” “RPG,” tells us exactly what we can expect from a game.

Except when people use the words wrong. Then it becomes a worthless word. And that’s what I see happen so often when people describe a Zelda game as an “RPG.”

By no means is it the only genre misunderstanding out there, but it’s the most prevalent one. Most of the time when I see it happen on forums or on other websites I think those that do label Zelda as an RPG don’t understand what RPGs are about, so here’s my little shot at clearing the air.

The typical argument I hear is “Zelda is a RPG because you’re playing a role.” Literally speaking this is true, but the definition of “RPG” is not a literal interpretation. Nor does “RPG” mean “statistics and levelling up,” as is it also often misunderstood to mean. RPG is a philosophy to game design, so to understand what an RPG really is, I’ll go through the history of the genre.

The modern RPG is largely the creation of a man, Gary Gygax, who rather enjoyed tabletop wargames (like Warhammer), but rather liked the idea of, instead of controlling an army, controlling a single hero and fighting in skirmishes with dragons and small groups of smaller monsters. The game he came up with? Dungeons & Dragons.

So what is Dungeons & Dragons? It’s a game which involves taking a role, and levelling up, yes, but that’s not what defines it. What defines it is the following – Dungeons & Dragons is interactive storytelling. One player takes on a role of a “Dungeon Master” and builds a setting for players to explore. He/ she then populates it with characters to interact with, monsters to kill, and traps to survive. What is key here is that the Dungeon Master doesn’t dictate what the players do. The players interact with the world in their own way, and the Dungeon Master responds to their actions.

In other words, Dungeons & Dragons is about creating an interactive sandbox to play in, with the Dungeon Master (“game engine”) taking a non-linear approach to storytelling.

Now, Dungeons & Dragons was pretty popular, and from there more pen-and-paper RPGs were created. The mechanics were different, the philosophy was not.

Then game designers realised that these games were pretty cool, but perhaps people home alone for a weekend might want to play an RPG by themselves. They set about developing games in the RPG’s image. Those early games were constrained by technology, though – though they could emulate the actual mechanics of an RPG, what they couldn’t do is build open worlds and non-linear storytelling. So instead they built linear stories and pulled people down a single, epic plot.

As technology developed, it became possible to open the games up, and the likes of Bethesda with the Elder Scrolls games have been able to build convincingly non-linear story lines. Games like Skyrim, The Witcher 2 and Dragon Age: Origins are genuine RPGs – mechanically and philosophically.

If we’re being analytical and defining these things properly, the typical JRPG is not really an RPG either. It’s more akin to an adventure game with RPG mechanics built into it, because the linear storytelling and open worlds that the actual RPG calls for are not there. As there is actually very little similarities between RPGs and JRPGs on a philosophical level, it’s hard to claim they are essentially the same thing. They’re entirely different genres.

And “JRPG” has evolved into a genre of its own. The perfect litmus test to see if a genre exists; walk up to your typical gamer and call a game a “JRPG,” and they’ll immediately understand what you mean. They’ll not be thinking of a ‘real’ RPG, but the association between word and what it stands for is strong enough that, essentially, a new genre has been made that just happens to share three letters in the name (confusing? Yep).

But even then, Zelda bears no resemblance to a JRPG, either. JRPGs, as standard, feature a party structure and a heavy emphasis on statistics-based combat. Zelda is an action-adventure game. That’s not to say it’s bad, but Zelda has more in common to Tomb Raider than Final Fantasy.

Once again, genres is a really useful tool for creating associations between games. It becomes an utterly useless term when we start trying to call apples oranges, though.