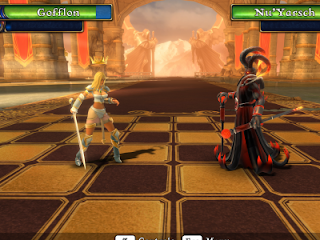 Chess is a timeless classic – and that’s stating the obvious. An eternal board game, Chess is almost as complex as the Chinese game Go, just as accessible, and an IOC-acknowledged sport, to boot.

It’s also a very, very hard game to get right as a video game. The problem is not in presentation – some of the finest Chess games are mere 2D flat grids and inanimate icons. No, the problem is in terms of the AI. An AI engine to run a decent game of Chess is incredibly difficult to perform. Often times, the sheer size of the algorithm slows the typical game to a crawl as the computer runs through the millions of “thoughts” it needs to process. At other times, a simplified algorithm makes for a game that is just too predictable, and even on the high difficulty levels an experienced chess player can exploit the engine for an easy victory.

Battle Vs Chess is a game I don’t think anyone will go into expecting an engine to challenge a Grand Master. It’s reasonably competent, and even on the lowest difficulty levels it’s able to punish a poor move by the player, but if you’ve been playing Chess for a while, then indeed it’s a game that struggles to keep up. Though there’s a lot of difficulty levels on offer, it’s a little disappointing that the higher difficulty levels aren’t really as creative as a good AI engine would demand, and while I’m no Grand Master, I was able to push this game over easier than the rather spectacular AI that I found in Pure Chess on the PS3 and PlayStation Vita. 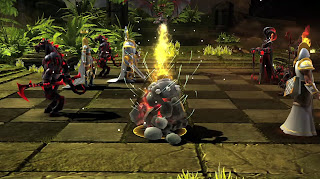 Newcomers to Chess will appreciate the game’s willingness to offer strategic tips on which moves to make in response to the AI. Those tips follow the same logic as the game’s AI, and I wouldn’t suggest more experienced players use them as a textbook on how to prepare for a Chess tournament, but they’ll get beginners off to a good start.

Experienced or beginner should appreciate the game’s presentation, though, which is really quite nice. As the game’s name suggests, this game features animated characters in the place of Chess pieces that rip one another to shreds as players direct them to “capture” one another. The outcomes of the battles follow the rules of chess (i.e the person who does the capture wins the battle), but it’s fun to watch the fight animations nonetheless. For people looking for a more traditional Chess experience there are traditional pieces and boards, but I’d suggest those people are better off getting a more traditional Chess game. 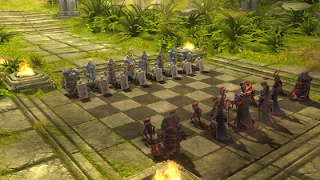 If that was all there was to the game then it would still be a worthy purchase for anyone who wants a Chess game with a bit of style, but there are two gameplay modes that really bolster this game beyond its shaky AI. Both turn the game into an action/ strategy hybrid that mean that pieces can indeed turn the table on their attackers.

The first alternative way to play sets off a quick-time event when one piece attacks another. In this mode you’ll need to press the right buttons as they pop up on the screen. Do it a number of times in a row and your little piece will damage the enemy piece. Miss, and your piece will be damaged. Here’s where it gets interesting – it’s possible to be the attacked piece (as in, the one that would be captured in a normal game of Chess), and win. If that happens, the attack is repelled and the opponent has just wasted a turn. This opens up a new strategic dynamic, since weaker pieces (say, pawns), are not as good at fighting as, say, a Queen. So do you attack the Queen with that weak piece in the hope that you get a cheap victory, or do you angle towards attacking the Queen with a more powerful piece? 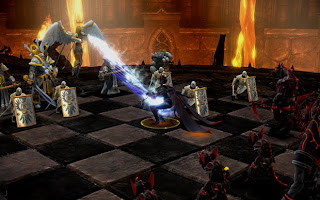 The other alternative game mode is even more exciting. It follows the same rules as the quick-time game, but combat plays out like a mini version of Dynasty Warriors. When one piece attacks the other, the action cuts to a small skirmish of a few soldiers on each side. You control one of those soldiers, and have weak and strong attacks, as well as a block and dodge button. The combat is simple, but very entertaining.

And it helps to make the game far more challenging, as the AI is really punishing. I never thought I would say this, but action fans can get a real kick out of this Chess game. 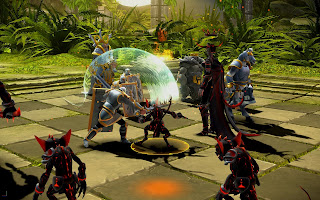 The one and only disappointing side to this game is the fact there is no online community around it. I’ve so far failed to get a single match going, and this is of course disappointing, as Chess is best enjoyed with real opponents. Perhaps I just got unlucky – if anyone out there has a copy of the game let me know and we’ll get a game going.

For the Chess purist, there’s Pure Chess, but for people looking for a really great twist on the classic Chess formula, Battle Vs. Chess offers it. It’s perhaps the most surprising game of the year to date.

(For people looking for a downloadable version, you can pick it up for PC over at Gamers Gate).

Gamers: the games industry is not the enemy! A lack of mutual understanding is