SNK Playmore goes deep into its catalog for another pair of classic arcade titles from the late ’80s- both Time Soldiers and Gang Wars are on the way to Sony’s consoles.

Set to release on July 24th (hey, that’s today!), these two lesser known games from the company’s massive publishing history will give you a serious case of nostalgia.

Gang Wars casts you as ‘Mike’ and sees you fighting your way through the rough and tumble streets of NYC. Your mission is to save the girl known only as Cynthia. Yes, that’s it. Honestly, I’m not even sure if ‘Mike’ even knows Cynthia or not but he’s gonna save her! Y’know, part of me misses the days when games were this simple… 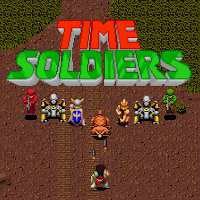 The second re-release vying for your e-cash this week is called Time Soldiers. This one is a vert shooter in the classic mold. TS was released al the way back in 1989 and pits one lone spacecraft (that’s unique…) against an armada of some pretty wild baddies. I’ve never played the game, but presumably you do travel through time because (as you can see) the screenshot has robots, knights, soldiers, and dinosaurs as your enemies.

Both titles are seeing release as Minis, so they’re compatible with either the PS3 or the PSP (and hopefully the PSV too at some point soon). They’re priced at $2.99 each and you can tag ’em for download at either the ‘New Releases’ or ‘SNK NEOGEO’ Publisher Page sections of the Playstation Network

You can also follow all things NEO and GEO at SNK Playmore’s Facebook page (which the company updates frequently with news and such) by clicking here.