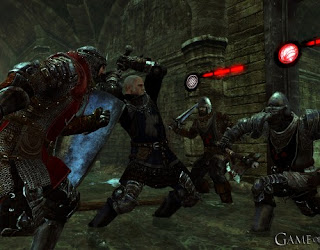 Game of Thrones is a title I was really looking forward to because I am a fan of the books and television show, but then the initial reviews came out and most of them were middling – some downright hard on the game. I think what you will get out of this game depends greatly on your expectations going into it. While playing Game of Thrones, I realized that in a way, I was participating in two very different experiences.

The first is the story, which takes place in George R.R. Martin’s amazing fantasy world. It does not rehash events from the show or books, but instead tells a new story that runs in parallel to other events. Much like the books, this game is told through a couple of different perspectives. To that end both characters are quite interesting, with the rigid Mors Westford a very different personality from Alester Sarwyck who is making decisions with the fate of others weighing on his mind.

The story is fascinating, and there were some excellent twists and turns – especially over the game’s final chapters. There are multiple endings you can see based on the events and choices you make during the final chapter or two, but even before the story concludes you can see the effects of many of your dialog choices rippling through the storyline. The most obvious example of this might be that a character is around or not around to interact with later, depending on what you choose to do – or they may be around and choose to interact with you in different ways. 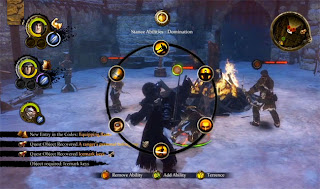 The narrative succeeds on many levels.

However, there is the other part of Game of Thrones, and that is the game itself. It almost feels like it stands apart from the storyline, like you have to navigate through the streets and combat to reach the story pieces you are looking forward to. Here the title is not as strong for several reasons. On a technical level, the graphics are poor. There is not a lot of detail, movement is often jerky and the performance in general was just not what I would have hoped for. The sound is a mixed bag, with some decent sound effects and a handful of excellent music scores (including the television introduction’s song). However, while the game has full voice acting, none of it is great.

There is a fairly customizable class and leveling process for each of your protagonists, though the actual combat is somewhat rough. I suspect it would have played better with a console controller, but I reviewed the Steam version and the keyboard and mouse interface was a pretty sloppy experience, no matter how much I tried to tweak the settings. The game also never recognized my controller, despite the fact it has a toggle for Microsoft and general controller that has worked with pretty much every other game I have played, including finicky ones like Skyrim. The combat itself has an interesting gimmick in that you can slow down time to make your choices. It is more tactical than just playing at full speed, but the skill choices you make are seldom terribly interesting – I found myself not having to use anything but basic attacks except in extreme situations where I was dramatically outnumber or fighting a boss opponent. 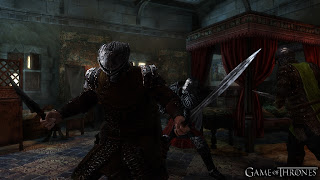 So in a sense, the game has two scores and it is up to you to decide what has greater value. The storyline was thoroughly enjoyable to me and I liked how my choices often had repercussions down the road. The gaming portion however, struggles badly. Sloppy controls, poor visuals, mediocre audio and boring combat make the game itself a one out of five with some redeeming value to be had in character customization and the Matrix-like slowdown of combat. Still, these things are nowhere near enough to compensate for the overall shortcomings in gameplay.

For me the good of the narrative outweighed the bad of the game, but I can see where some people will find the shortcomings in the gameplay and decide that Game of Thrones is not for them. It is a shame really, because this RPG should have been far better than this.

The weekend discussion: “Do you buy DLC? And if so, what?”

Review: Magic the Gathering: Duels of the Planeswalkers 2013 (PC)