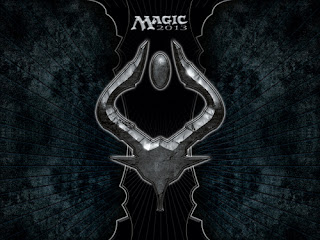 I am a huge fan of Magic: The Gathering. I first started playing back in early college around 1994 – so I’ve seen a lot of the game’s earliest cards. Eventually my friends and I graduated from college and moved on and lacked the ability to play the game anymore. After several years of my cards sitting around unused, I (regretfully) sold them. Fast-forward to about two months ago when a handful of my friends at work discovered Magic and asked me if I knew anything about it. Let’s just say I wish I still had my old cards, because I’ve been picking up packs ever since as I start over.

Probably the greatest need though for a Magic: The Gathering player is competition. Lack of it led me to sell my cards. Well, here you have the option of playing against a fairly solid (for the most part) AI or against other players online. In terms of modes, there is a campaign mode where you go through a series of battles against other Planeswalkers in an effort to unlock more decks. There are some challenges you can play along the way, that are interesting from time to time, but downright annoying at others because they are not subject to normal deck building rules. For whatever reason, it irks me a bit when the computer can play seven Primordial Hydra mythic rares in a row during these challenges, even though they are not supposed to be necessarily representative of a true match. 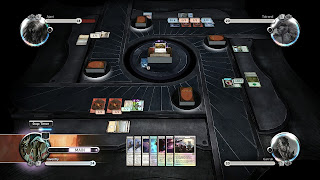 This year’s iteration replaces the Archenemy mode from 2012 with Planechase, which is based on sets of cards you can purchase in real life as well. These change up the rules of Magic: The Gathering a fair amount, and while I do not mind the mode, it is not my favorite. I would like to see more classically accepted games like Commander or Emperor personally. Still, this is a good representation of that game mode and gives you another mode to play – it just is not a mode I liked as much as the classic game. There are also quite a few ways to play online in ranked matches, including free-for-all and Two-Headed Giant.

I played the Steam version of the game, and I have to think that this interface works better on PC than it would with a PlayStation 3 or Xbox 360 controller. I got the first Duels of the Planeswalkers on Xbox 360, 2012 on PlayStation 3 and now 2013 on the PC and things like selecting cards, zooming with the use of your scroll wheel and such really feel better on the PC. 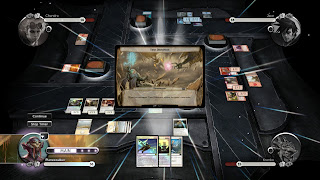 My biggest single complaint over the three releases however, is the limitation in deck building. You really do not have a true deck editor. You start with a set type of deck, and as you win matches you win cards for that deck specifically. You can then edit in which cards you want and do not want while adhering to the rules of the game (like no more than four of a non-basic land to a deck) with nice little metrics that show up giving you an idea of your creature to spell ratio. Another thing I do not understand is why the decks are single color (with one exception) this time around. The limitations in the deck builder are bad enough, but why not allow for more than a single multi-color deck? Part of me suspects that will come in a future expansion.

The core game is still great, but this release feels like it is treading water with last year’s game. That is not to say it is a bad release – I really enjoyed Duels of the Planswalkers 2012, and I had fun with 2013 as well. The visuals – the card illustrations in particular – are excellent, the sound effects and music while lacking in variety are decent and it is fun beating a challenge and seeing what your next card is. However, it feels like this release is geared toward relatively inexperienced Magic players, with some limitations that may frustrate veterans. 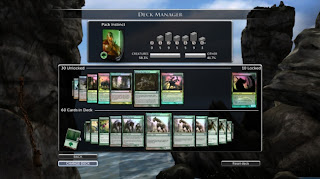 Of note, you can get a promotional pack of cards that vary in theme depending on what system you purchase the game for (iPad/PC = Serra Avatar, PlayStation 3 = Vampire Nocturnus and the Xbox 360 = Primordial Hydra). These are a nice sneak peek at the impending 2013 Magic: The Gathering core release for card players, and the game itself features those cards and gives you a nice peek at what is to come. I have heard quite a few shops in my area are nearly out of the packs for those returning vouchers though, despite Wizards saying that the promotion will run through December, they also worked in a ‘While Supplies Last’ so if that is something you are planning to do – perhaps do so sooner than later.

It may sound like I did not enjoy the game a lot, because I had so many quibbles above. Truth be told, it is just that my expectations for Magic: The Gathering are incredibly high, and while most of them have been met, I feel a need to call out the areas I feel let me down. If you are a veteran to the game, you already know what to expect. Newcomers will be gracefully helped along by the system as they learn the game. This 2013 iteration is a really solid game that really needs to make some strides I think next year, but is still a good deal of fun.

Review: A Game of Thrones (PC)