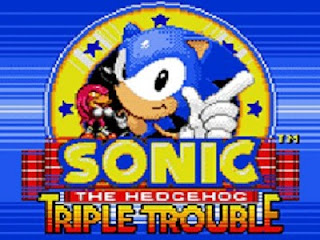 Confession time: I’ve never been a huge fan of Sonic games. I’m not particularly good at them, and there just hasn’t been enough to them to inspire me to become good at them. The characters, colours and overall charm has always been on the wrong side of over-the-top for me.

That said, I was pleasantly surprised by Sonic The Hedgehog: Triple Trouble. It’s a thoroughly well designed little platform game that, as a primitive handheld action game, holds up remarkably well all these years later.

The first thing that struck me is just how good the game looks. The Sonic sprite is gorgeously animated given the console it appears on, and the environments have managed to retain the bright and breezy aesthetic style. Indeed, perhaps because of the constraints of the hardware and simplification of the environments, I found this game to be less distracting and more playable than my usual Sonic experience. 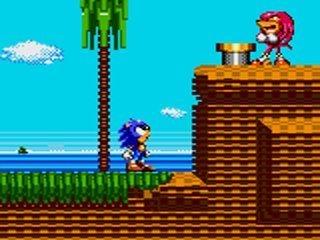 Of course, Sonic isn’t the only controllable character in this game. The variety that Tails brings to the game is limited, but just enough to encourage players to give the game (a reasonable length at six worlds and three acts per world) a second play through. As with most Sonic games, the levels are bustling places to be, with multiple tiers to explore and secrets to find. While the temptation will always be there to speed run through the game, Triple Trouble can be just as rewarding to meander through.

Speaking of speed running for a moment though, I suspect some Sonic fans will be put off by the fact that this game is relatively slow. Especially compared to the modern Sonic games. Because of the limits of Game Gear hardware Sonic had to be slowed down so people could, you know, see him. Now, that suits me just fine because of where my platforming skills lie, but people who go in looking for a lightning-fast game might be a bit disappointed. 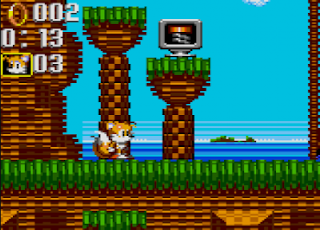 That’s not to say it’s easy, though. Boss battles tend to be a little obscure to figure out, and because the Game Gear screen is square and Sonic/ Tails occupies the middle of the screen, there’s only so much forward planning you’re able to make. The controls can occasionally be the enemy too, being a touch too sticky to make precision platforming much fun.

In terms of Virtual Console features, being able to suspend play is a huge boost to the game and means that people can play for the kinds of short bursts of time that the arcade trappings of Sonic works best with.

It has to be said that Triple Trouble is one of the finest Virtual Console platformers to date. It’s certainly one of the best looking games, and with the exception of Wario Land, it features the best level design. Well worth a look, even if like me you’re not usually the kind of person that plays Sonic games.