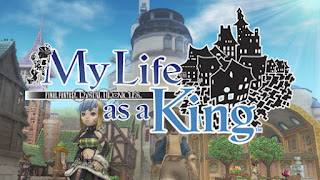 With the impending launch of the Wii U and very few releases of note on the horizon, WiiWare seems to be in its dying days. What’s interesting is that one of the service’s most technically advanced games didn’t show up near the end, but has been here all along – the mouthful that is Square-Enix’s Final Fantasy Crystal Chronicles: My Life as a King. It’s not the best game on there by any means, but it sure showcased what could be done in spite of Nintendo’s restrictions.

The story is a simple but effective coming of age plot. You and your attendants stumble upon a barren kingdom once ruled by your presumably dead father. Using a power called Architek bestowed upon you from the sterile kingdom’s mysterious crystal, it’s your duty to rebuild the land and surpass its former glory. Hail to the king, baby.
Rather than fighting foes in traditional Final Fantasy fashion, this one is all about design choices and tactical decision making. Your job is to create houses, parks, shops, and more so the town can begin to thrive. However, the power of Architek isn’t limitless – you need a mineral called Elementite to continue building structures. So, in order to acquire more of this fantastical granite, you need to enlist the aid of young adventurers to battle monsters in dungeons (after all, you’re the king – you can’t risk falling in battle). The warriors in question will level up and bring forth spoils such as cash and new designs for expanding your land.

Most of the game’s non-resident buildings function as hotspots for adventurers to upgrade items or purchase equipment and spells. Like in the “real” Final Fantasy games, you can also assign classes to your workers such as black mage, warrior, thief, etc. When building your town, you can’t just throw things anywhere or you’ll hastily run out of supplies. You need to be able to position the facilities in such a way that your soldiers don’t spend all day shopping at the stores instead of fighting. 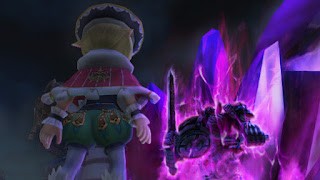 Once you’ve assigned your adventurers to the appropriate areas, the rest of your day revolves around regular maintenance of the city. This includes building new homes, spending money upgrading equipment, recruiting new soldiers, and boosting morale.
By far the biggest time waster, however, is raising the town’s morale. This is done by talking to the folk all around the kingdom, with each conversation raising a speck of your morale bar. It’s nice to read the first few conversations, but the villagers soon begin recycling the same dialog ad nauseum day in and day out. Considering this activity comprises most of your days, you’ll wish there were some more engaging methods of raising the spirits of your followers. Things simply devolve into “run around and tap the button” far too quickly.
Events in the game run on a time-based system. The days are questionably brief at the get-go, but they swiftly expand as you progress through the game’s plot. Once dusk hits, your advisor will force you to pack it in for the night. Upon waking up from your slumber, you’ll be greeted with a financial report. From there you can assess your funds and reward your adventurers with medals before continuing the daily grind.
There’s also quite a bit of downloadable content to hunt down. Considering the game’s relatively expensive 1500 Wii Point price, it would be easy to dismiss Square as unnecessarily money-gauging. On the other hand, WiiWare’s 40MB limit and the game’s significant size would have made including the content within the core game near impossible anyway. The additions are actually quite worthwhile, with the highlight being the ability to recruit new races from the Crystal Chronicle series to live in (and fight for) your town. Should you want to invest in everything, you could easily spend as much money as you would for a retail game. Even if you’re not into buying extraneous fluff, the core game should last a good 15-20 hours or more.
Perhaps the most noteworthy aspect of My Life as a King is in the visual department. It’s arguably one of the most advanced looking games on the entire WiiWare service, which is only made a more impressive achievement when taking the aforementioned size restrictions into consideration. Character models and the city itself look polished. Aside from rare graphical slowdown, the game screams “premium retail”. If there’s one aspect that could have been greatly improved, it’s the music. The few tunes there should be relatively harmless and jovial but quickly become grating thanks to an overall lack of songs. You’re going to hear the same two or three melodies for hundreds and hundreds of in-game days, so do yourself a favour and turn off the volume (or crank up your own jams).
My Life as a King will be a very hit-or-miss game depending on your outlook. Some will perceive it as shallow and monotonous, yet there’s still a certain charm in watching your kingdom expand and your adventurers develop each and every day. The value is impeccable if you enjoy simulations, but the repetition could dampen the entire package.
-Clark A