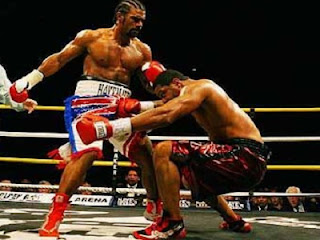 Grubby Hands is an indie iOS developer with an eye for production values. Its last game, Boy Loves Girl, was a charming little abstract game. The followup, David Haye’s Knockout, shares that eye for visual presentation, but it does lack somewhat in terms of charm.

Of course, this is a boxing game, rather than a story of love, so I guess “charm” was a bit much to expect, but I still came away feeling a little hollow. It’s not that the game is bad, but given its greatest inspiration is clearly Punch Out! there’s just as not as much fun or personality to the game. Where Boy Loves Girl was nothing if not original, this is a more generic experience and I fear it’s going to struggle to stand out.

The opponents that your little boxer man will face is the first problem. The folks in Punch Out! were a weird and wonderful bunch, even back in the NES era. The three opponents that come with the base download here are very vanilla. They’re animated nicely, and the boxing arena and crowd are incredibly stylish and smooth, but it still manages to take itself a little too seriously for a toon game. In other words: I wanted a clown to beat up. I assume there will be a clown added in as a DLC purchase, but that doesn’t help me vent my frustration right now, does it? 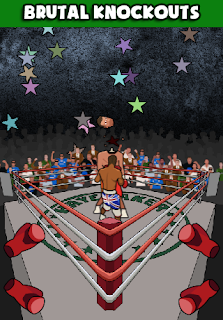 The bouncing, brightly coloured visual style also clashes weirdly with the finishing moves that pop up from time to time and are rather… gory for a game that for the other 99 per cent of the time is quite family friendly. The first time I pulled off a decapitation it was entirely accidental and completely baffling. At the sight of the separated head my brain actually went through a process of denial – not because I have an aversion to violence – but simply because the brief second of raw violence seemed so out of touch with the rest of the game. Think an episode of Loony Tunes where Elmer Fudd shoots Daffy Duck’s head clear off amongst gouts of blood and you roughly are at how confusing this game is on a presentation level.

The combat itself is a near carbon copy of Punch Out!. There’s no movement controls to worry about, but rather there’s high and low, left and right punches, and then the ability to dodge left and right. The game quickly settles into a rhythm which follows as so: a “!” will appear over the opponent’s head. That’s a sign he’s about to strike. Time dodges to avoid his attacks as a counter replaces the “!” Once the counter hits 0 the opponent is going to pause in his attacks, and it’s time to strike back.

While it’s a clean combat system, it’s also a little easy. The challenge here is in finishing the opponents off as quickly as possible, with online leaderboards encourage players to go after the fastest execution. The problem there is for people that prefer challenge to come through the game itself, it’s just not there.

And let’s not forget there is not exactly a dearth of quality Punch Out! clones on iOS already. Grubby Hands is essentially competing in the same spaces as Infinity Blade here, and I don’t see that ending well.

It’s not a bad game and the production values alone put it above many other games iOS games, but David Haye’s Knockout is slightly disappointing compared to the amazing creativity of Boy Loves Girl.

So Square Enix, you’re doing PS2 classics after all? How’s about these five?