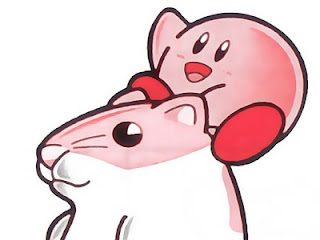 Kirby is ever reliable for two things: firstly his games are full of charm, and secondly they’re obscenely easy. Too easy, as was the case of the original Kirby’s Dream Land. The sequel is the more balanced game, but just be aware that the price you’re paying here is not for a game that’s going to last.

The biggest and best addition to the basic platforming formula here is that Kirby now has a few buddies that join the party. The puffball retains all his typical abilities to float and vacuum up enemies, but this time around he’s joined on his quest by a hamster (who actually manages to be even cuter than Kirby), an owl and a fish. In teaming up with Kirby, these noble steeds offer him new abilities, but at the expense of some of Kirby’s traditional strengths.

The gameplay immediately becomes more varied as a result of those additions as the developers were able to broaden the scope of the game and provide players with a constant stream of new environments to explore and new situations to adjust to. That new variety helps keep the game interesting throughout its duration, and it needs it – because the new conditions aren’t in any way, shape or form more hostile than in Kirby’s previous Game Boy outing. That is to say it’s still so easy that it’s not going to challenge even the most beginner of gamers. 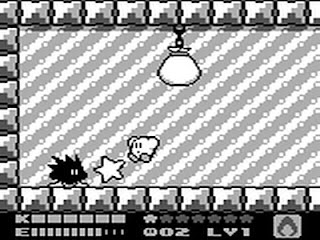 Lives are in plentiful supply and enemies and hazards are not. In the first game one of the highlights were how vibrant the environments were. Like a sardine can there was so much stuff packed into the small amount of real estate that it was really quite engaging. For the second game because there are (many) more levels the action over a greater landmass. It’s a trade-off that doesn’t sit well with me. As easy as they were the packed, carefully built environments were a constant assault on the senses in the first game, but here there are some really quite dull levels. As is the way with life – more doesn’t mean better, and level design has taken quite a hit in a bid to make more of them.

There’s also a lot of reuse of assets from the first game. Enemies (even bosses) have carried over, and what little strategy was involved to beat them remains the same here. The new enemies that fill in the proverbial gaps are worth playing against though, because they have quite original attack patterns. 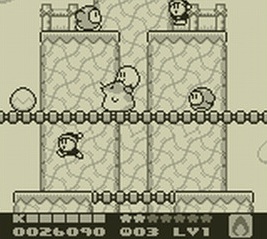 One thing the game has going for it is the visual style. There’s so much personality in Kirby and his allies that it’s hardly surprising that he’s become such a popular hero. Even in monochrome the environments are vibrant and as limited as the animation is Kirby is adorably cute. He’s also completely upstaged by Rick, the most adorable game hamster this side of the miniature giant space hamster, Boo (a cookie if you know where that hamster’s from).

I really can’t overstate how easy this game is, though. If you like value for money, then this is not really the game for you as there’s very little reason to replay once you’re done. For cute platformers on Virtual Console I’m still a bigger fan of Trip World, but that said, Dream Land 2 is certainly better value than the first Kirby game, and is worth a look in if you’ve got youngsters playing with your 3DS (what are you doing, letting someone touch your 3DS!?!).