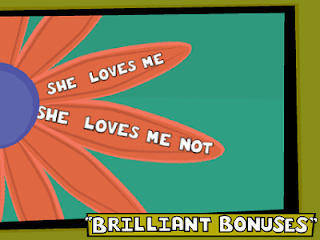 Boy Loves Girl is a curious little game for the iPad. It’s artistic and charming, but it also takes some work to fully appreciate.

I’m going to say from the outset: I’m not entirely sure the developer, Grubby Hands, understands what sells well on the iOS. When you’re looking at a platform that rewards games that offer instant gratification with minimal engagement (Angry Birds, Flight Control, insert-popular-iOS-game-here), building a game that engages a deeper part of the brain is a surprising move, and possibly risky from a business point of view. I hope it’s successful, though, because here is the perfect foil for the likes of Angry Birds.

In execution, the game is remarkably simple. There’s a fellow that is chasing after a girl (we presume the girl of his dreams). He’s on auto pilot, and you don’t get to control him. For some reason, he’s holding on to a piece of string that is attached to a moon. The moon is the bit the player controls. Swiping up and down on the touch screen will increase and decrease the moon’s elevation. The goal of the game is to collect smiling face icons that spawn sporadically in the playing space, as well as tap on (and avoid) the various cloud obstacles that crop up along the way. 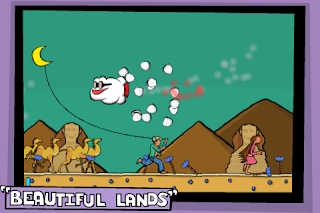 Sleeping clouds spawn “Zzz” icons that destroy the moon if touched. Storm clouds will zap unsuspecting moons underneath them with a lightning bolt. Rocket clouds fly quickly past. They’re also deadly. Dodge enough and collect enough smiles, and the level ends with a good star rating. If an obstacle touches a moon, it’s a fail and you’ll need to start again.

Does all that sound confusing? In execution, it isn’t really – this is just one of those “run from one end of the level to the other and miss the traps” deals that are so common on the iPad. It’s just that the abstract and surreal art style sets it apart as something very different.

And initially that abstraction is a little disorientating. It feels like the game should be more. That all this effort went into such a basic game is, initially (and quite weirdly) disappointing. It takes a while to get over that initial impression, too. While this is a sugar-sweet little game, with a beautiful art style, it’s the kind of game that grows on you, rather than hits you up front. In other words, it’s subtle and elegant; intelligent rather than straightforward. 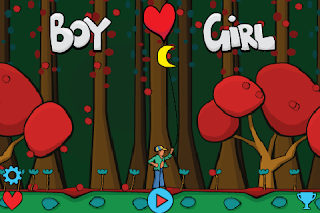 As the levels go on (and aside from the survival levels, there’s surprisingly few of those), the games charm grows on you, and weirdly, despite the basic character art, you start caring about this boy’s plight. As he chases after gazelles, camels and the other animals that his love demands (you’re never told why, she just does), you hope he does get the girl, simple minded and innocent as he is portrayed to be.

The visual aesthetic is backed up by a basic soundtrack that does a beautiful job of contributing to the storybook or fairy tale aesthetic. There’s no background music that you’re going to remember, as that would be distracting. The sound effects are muted to force you to concentrate on the game, rather than being spoon fed the content.

And ultimately, the reason I’ve spent so long in this review talking about the aesthetic and artistic approach to the game is because that’s precisely what Boy Loves Girl is. It’s not nearly as much of a “game” as the less subtle games, but the surreal and innocent experience of this game is in the long run far more resonant. To put it into a catch phrase: I’ll remember Boy Loves Girl’s gazelle chases and its enemy clouds. I’ve already forgotten individual levels in Angry Birds.