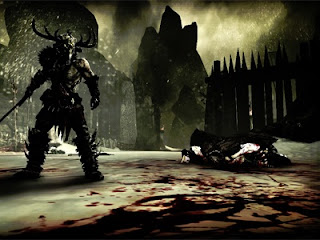 What happens when you take God of War-style rage, a hyperkinetic camera that makes Ninja Gaiden 3 look positively pedestrian, and Skyrim’s pseudo- early European visual style? Well, you end up with Bloodforge. While on paper that should be a recipe for success somehow it’s nowhere near as awesome as it could have been from bringing those three games together.

It’s not a bad game by any means, but Bloodforge is definitely one note. Take weapon, stick it into enemies, rinse and repeat. Every so often there’s a boss to kill in much the same way and then it’s on to the next horde of enemies. There’s a vestige of a plot in there which is told through single lines of dialogue. “My family is killed,” our ‘hero,’ Crom, monologues. “I’ll help you get revenge” a raven woman croons. “They die,” Crom growls as he enters a form of hell on his quest. It’s almost poetic in its raw anger and minimalism, and the brevity does a great job of keeping the game playing to its strengths: the action. Given the minimal skills of the voice actors I’m personally rather glad the developers didn’t shoot for the stars with the plot because as underdeveloped as it is, at least the scraps of plot here hold together some mystery and intrigue and are too brief to be really let down by the B-grade cut scenes.

What is really striking is the visual style. The stark whites, greys and blacks of the desaturated colour palette creates an underworld to explore that is cold to the point of having a physical chilling effect on players. Couple that with the dark crimson blood that spurts everywhere in combat and acts as a gruesome path to follow on the quest for revenge and you end up with a game that might be basic in construction but uses those limited tools it has to great effect. There’s a small range of monsters populating this underworld, but they’re horrific creations that look like they belong in hell. 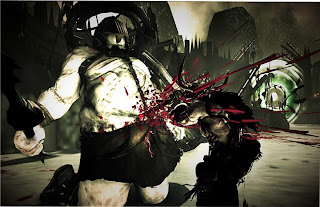 Matching plot to the visual style results in an oppressive bleakness about the game world, and players need to be warned of that, as the intensity doesn’t let up. The final boss might be slaughtered after around four hours of play, but the sheer intensity means that this is a very draining game. It’s hard to play for more than a few hours at a time without becoming genuinely tired. It’s not a bad thing, I’d argue, but rather a reflection of how effective the game is in conveying the aggressive energy that this genre has for so long tried to capture.

And that visual style is helped by a swirling, violent camera to create a game that can be at times physically sickening in its dynamism. That’s not necessarily a bad thing – go into Bloodforge with the right frame of mind and its excesses can be spectacular. Just like Ninja Gaiden 3 it can also be a very frustrating game as it’s hard to get a lock on to enemies and they have a tendency to swarm from unpredictable angles off screen, and so it’s also a game that’s best on played on easy when it can be an experience rather than a unfair challenge. 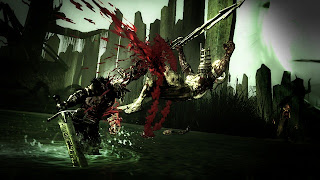 In most other ways the game is like most other examples of the genre. There’s a range of different weapons Crom can use, each capable of pulling off brutal executions. As Crom executes the brutes his blood gauge fills up. When it’s full he can enter a rage where his enemies slow down and he becomes even more deadly. There’s a few upgrades that can also be bought at a few points through each level. The game doesn’t take too long to run from start to finish, which is just as well because the combat system is fairly one note and combos are a standard basis two button affair. It’s also worth noting that while there is a dodge button, there’s no block button, and so offense is most definitely the best form of defence with this game.

Luckily for Bloodforge, there’s no God of War on the PS3, so its only competition with this genre is the second tier examples of the genre, such as Dante’s Inferno or Splatterhouse. While those games are by far slicker experiences, Bloodforge does win in terms of offering raw, angry energy and a rather competent online leaderboard feature that does a good job of giving you incentive to replay levels – the person with the most blood spilled on any given level gets listed in the virtual trophy room.

It’s just a pity there isn’t more to this game, because it gets the presentation so right. A more nuanced combat system would have helped but I must commend the game for understanding what it does well and sticking to that. This is a game of brutal violence and raw power, and the games’ various elements do come together to create that precise effect.