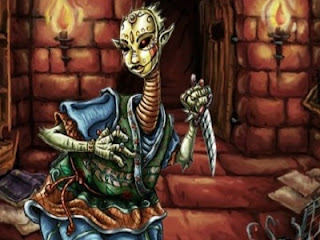 Well, it’s not every day you see an RPG mix it with a point-and-click adventure game. That’s what’s happened here, but as odd as the mix is, this indie title gets it right… most of the time.

Dark Scavenger is an interesting mix of genres. It harkens back to the point and click adventure games of old where you find items on the screen and click them to see events unfold. In this case, the game uses text at the bottom of the screen to display the game’s story content and dialog. Oftentimes that leads to a branching set of options. The combat is turn-based, like you would expect to see in a classic RPG.

Everything in this game is driven by mouse clicks, which is good for the most part, though it can make combat just a bit odd at times – but I’ll get to the combat later.

Psydra Games has found some hype behind this game, winning an Honorable Mention in indiepub’s 2012 Independent Propeller Awards Festival and a mention on Destructoid as well. It takes only a few moments to realize that the team was going for ‘quirky’ (if you want to put it delicately, or ‘way out there’ if you’re being frank) with both the written dialog as well as the art style.

The game opens with a fight, which serves as a tutorial for learning your way around the point and click combat system. What that means is you choose an item, weapon or ally by first choosing the primary menu item, and then clicking on what you want to use.

Sometimes choices can be combined, like using a control device with a big red button and then a sword changes your weapon from one that hits a single target, to a weapon that swings at every enemy on the screen. Allies can be pretty varied as well – one of my favorites was a leech one that damaged the opponent to give me health back.

When not in combat, you can hover over items on your screen, and those that can be interacted with gain a red glowing outline. As you move around a somewhat grid-like map from one room to the other, you also click on arrows to navigate from one direction to the other. Like I said – everything is click-driven.

Your objectives are two-fold. You are attempting to make your way through the maps, but you are also attempting to gather supplies (hence the Scavenger part of the title). 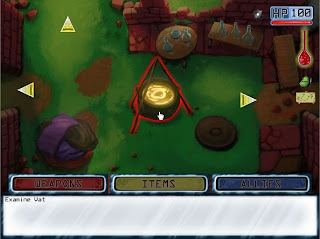 Sometimes these are found just by clicking on an item in the environment, sometimes they are found by beating someone in combat, and sometimes you gain new loot from navigating puzzle-like sections of dialog.

Maybe you need to show off a piece of ‘high technology’ to a race that has never seen a ray gun, other times you can offer found items in exchange for other pieces of loot. One example was an alien who wanted to test my strength by hitting me as hard as he could – and I was allowed to lift a weapon up to help dull the impact.

Once you have collected some loot, you are given a chance to craft it into a weapon, an item or an ally. You do this by turning that piece of loot over to one of your three primary alien travel companions: Kamaho, Falsen and Gazer. Between the varied options in the dialog trees, combat options and the multiple uses for loot, there is some replay value for this game – which is a boon since it does only take about five hours to beat.

So then the basic question becomes: Is it any good? 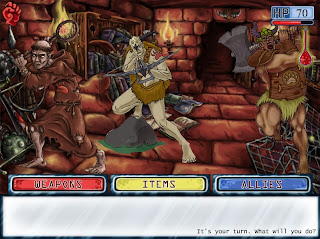 Well, yes and no. I did enjoy how wide-open so many of the choices were, and I can see how the sense of experimentation could lead me to trying situations in new ways. The art style is going to be hit or miss depending on a person’s preference. While I did not mind the style at all, there is very little in the way of animation going on here and I know that is a big deal to some people.

The combat interface feels a bit clunky at times because you have to click item, then click the item you want, then you click weapon, then you click the weapon you want. Then you click the bad guy you want to take a shot at – and while it does provide a great deal of flexibility for the combat, it can be a slower than a system where you’d press a button a time or two and be done with it.

At first I actually liked the combat quite a bit, but as I was getting on through the last stage – which was a somewhat frequent series of what I would call ‘boss fights’ – well, the appeal of reading the text had really worn off. The visual cues are not terribly distinctive and it was a bit repetitive by the endgame.

One other technical note that I found a bit odd when I started it up, is how the game is presented. Dark Scavenger is brought through a completely flash interface, and it uses your Internet browser’s cache to store its games. I am certain there are perfectly valid technical reasons for this, and they at least do warn you about it when you begin playing the game, but it still struck me as a bit odd that if I happen to clear my cache, I’m losing my saved data as well.

Dark Scavenger is not a bad game necessarily, but it is not a great game either. I killed several hours with it and did not mind that I had in the end, but it is not a title I can see myself running back to play now any time soon either.