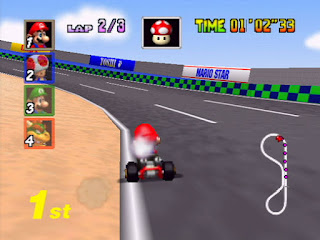 Mario Kart is easily the biggest of Nintendo’s Mario spin-off games – for good reason. The first title on the Super Nintendo popularized a subgenre of racing; one that would give way to many clones over the years. The same praise can’t be said for its first sequel, but it’s still worth a look.
If you’ve never played Mario Kart before today, here’s the quick lowdown. Races take place on various character-themed tracks, divided into three laps. You’re free to pick a character according to his or her handling, weight class, and acceleration. Handling and acceleration are pretty self-explanatory, but your weight class determines whether or not you can pound your opponents or get pounded during a collision. Once in the competition, you’ll hop into your “kart” and duke it out against the other racers by collecting and using items on the track. It’s a lot simpler than it sounds, but there’s a reason the formula has been around for 20 years.
In terms of general kart control, 64 offers neither the user-friendly control of Mario Kart 7 nor the intense, twitch-heavy action from Super Circuit. It initially feels like a missing link. It can be hard to adjust at first (especially to the strange drifting) but the controls become solid with time.
Potential control troubles aside, it warrants mentioning that this is quite likely the easiest game in the entire series. Unlike the more recent titles, you can often dominate the schizophrenic computer opponents without being pestered by an overabundance of blue shells. You’re also able to get your fair share of good items, even while in better positions. If the course is lengthy enough, you can still come in first despite a total lack of drifting and still afford to bump into some obstacles along the way. 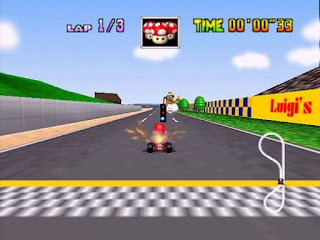 Sadly, there’s not much content to be found in the single player campaign. The game packs 16 well designed stages divided into four cups. These cups are then further separated into 50cc, 100cc, 150cc, and Mirror (ranked in order of top kart speed and computer difficulty). The game’s lowly difficulty comes back to haunt the longevity, in that a dedicated hour or two could have you completing everything offered by the single player mode.
To complement the Grand Prix mode is Time Trials; a mode that allows you to play through any course of your choosing and head for the fastest time. Given the reasonable track selection, you should get a kick out of this for a bit. This Virtual Console edition suffers from the inability to save ghost data, so you’ll either have to write down your times or simply use it as a training mode of sorts.
Last of the modes is Battle, which has you driving around large open areas in an attempt to pop all of your opponent’s balloons. This can be done by bumping them off the edge (an accidental suicide works well too), firing shells, and through various other malicious actions. You’ve got a solid selection of four courses to pick from, all of which play very differently from one another. Block Fort in particular is the stuff of legends. Disappointingly, battle mode is also exclusive to multiplayer (you can’t choose to practice against computer players), so unless you’ve got a dummy controller to plug in, you won’t be able to even try the mode by yourself.
Another glaring omission is the lack of a free race mode. Should you want to practice, say, Kalamari Desert with computer players, you’ll have to play through three other courses first. Why this was restricted to multiplayer is beyond me. 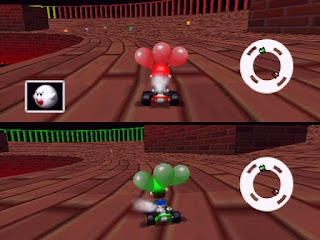 The main reason you’ll want to consider Mario Kart 64 a viable purchase is the multiplayer mode. If you’re not into the whole online experience offered by the more recent entries, you’ll find a very competent package here. Given the 16 courses and excellent battle mode, you could easily justify this purchase if you’ve got some friends or your young ‘uns around.
The visuals hold up reasonably well, although you can tell the game was released in the earlier part of the Nintendo 64’s lifespan. The characters and maps are as fantastical as ever, but appear somewhat washed out. Nevertheless, it’s a very good looking game in terms of both glamour and aesthetic practicality.
The soundtrack is probably the most alluring prospect of the single player mode. The game is littered with more catchy and cheerful melodies than I care to remember. If you’ve played this one as a child, your heart strings will be pleasantly caressed. Having character voices is a nice touch as well. There is an occasional problem where the music slows down (may be exclusive to the Virtual Console port), but the issue doesn’t often pop up unless there are many racers on the screen at once.
Mario Kart 64 isn’t quite as compelling as it once was. The single player mode is a breeze, the track selection is half of most of its sequels, and a few key options are absent. With that said, it still plays perfectly well. This is absolutely worth picking up if you have even one friend around willing to play. The sheer excitement offered by a multiplayer battle on Block Fort makes Mario Kart 64 worth thinking twice about.
-Clark A