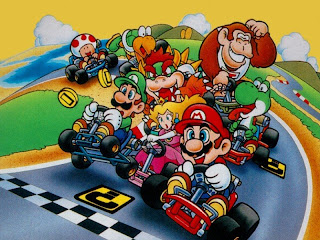 Of all Mario’s diversions when not saving Princess Peach, Karting around has been his favourite hobby. We’ve had seven Mario Karts now, and the series has changed dramatically over time.

Have all the changes been for the good though? I would argue no, as my ranking list of Mario Kart games below would show. Be sure to let us know what your personal Mario Kart preference is in the comments!

From least to greatest: 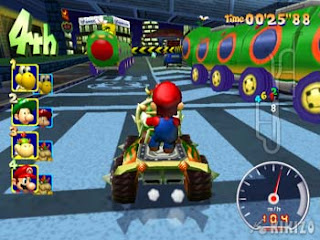 This is by far the weakest Mario Kart. It uses a two racer per kart gimmick that doesn’t do much for the gameplay aside from giving players access to two different overly powerful powerups. It then sticks those racers on a fairly bland bunch of tracks and lets them have at it.

But those items are the game’s greatest failing. Double Dash is the first time in the series that items took over from racing as the focus of the game. I didn’t appreciate losing a race at the dying stages because I got hit by a Blue Shell and got sent to last place then, and I don’t appreciate it now. 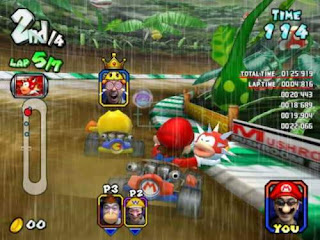 Mario Kart Wii’s greatest mistake was in making the karts pretty much useless. Bikes were the way to go for any competitive racer. Couple that with a steering wheel attachment that Nintendo tried to encourage people to use, but was stupidly uncomfortable in practice and you’ve got a game that feels more gimmicky than genuine. It’s like Nintendo wanted to prove that motion controls could be used to enhance gameplay. I just went back to the classic controller which of course meant I never got to be considered an elite racer by the game.

Still, the online was fun and functional and the choice of classic tracks was unparalleled. With the exception of Double Dash none of these games are bad, per se, but Mario Kart Wii is the least of the ones I would consider worth playing. 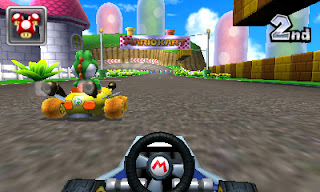 Mario Kart 7 took item spamming and made an absolute art form of it. There’s no point even trying to race well because if you’re in the lead you’re going to get torn to shreds right before the finish line.

Beyond those balancing issues, Mario Kart 7 also suffered for being the worst bunch of tracks in the series history. Case in point: I remember some glider sections and some water sections, but I don’t remember a single original track in this game from the last time I played it in December. Meanwhile I remember the good tracks of Double Dash years after I put that game down. Nintendo made these tracks too busy to be memorable. 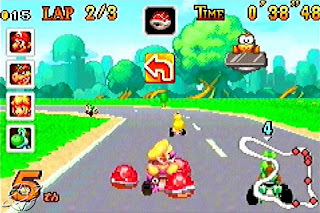 Now we’re talking about some great games. Supreme track design rules here: Nintendo really is at its best when it’s limited in what it can do, and Super Circuit does a beautiful job of using twists and turns to create interesting driving experiences. Items were a rarity meaning driving well can lead to victory, too. The only thing that lets this game down is the controls are a bit wonky compared to every other game in the series. 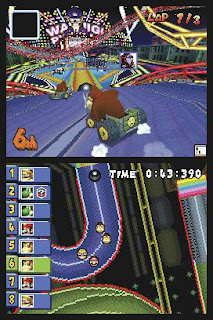 The best of the modern Mario Karts by far, Mario Kart DS has the distinction of being the first online Mario Kart, and that was a beautiful thing back in the day. Sure it was hard to get a match finished because the losers would disconnect, but that’s what friend codes were for.

Track design was superb, too, taking full advantage of the DS hardware advancements over the GBA to insert geographic variety into the game. The controls were also especially tight and accurate, although it could get tiring pulling out those powerslide boosters on the D-pad.

The classic and still very nearly the best. There’s a simple charm to Super Mario Kart that has never really been bettered. The super-bright, super cheerful visuals, the basic tracks that were perfectly balanced to allow everyone of every skill level to get into and enjoy, the happy music.

It’s just a touch unfortunate that it was only ever a two player game, because Mario Kart is best enjoyed with friends. Still, it’s outrageous fun even by modern standards. 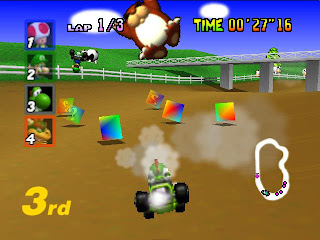 Mario Kart 64 introduced four player racing to the series, was supremely well balanced with regards to items vs. Rewarding skilled driving, and had some of the best track design ever seen in racing games. As dated as it looks today, MK64 was an unbelievably well designed racing game and it was this game that cemented the series’ reputation for quality. In no small way we owe the success of this game for the reason Mario Kart still exists now. Forget Mario Kart Wii, just go download this game from the Virtual Console and you’re in for a great time.

Why games are not expensive