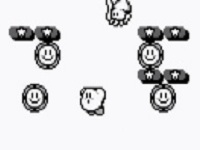 Take breakout. Add Kirby. You have Kirby’s Block Ball. Now for the review: It’s better than Alleyway, but not worth buying.

There’s two big problems this time around. First, the game is way too easy. Anyone who saw the “Kirby” in the title should realise that already, but the levels really do fly by here. In addition to bouncing off a paddle, as any Breakout game does, you can time a button press to have Kirby spring, trampoline style, off the platform. This temporarily turns him into an even more powerful wrecking ball, and makes it easy to clear away even the toughest blocks. Just to make things even more simple, there’s some very powerful powerups that pop up in the game from time to time, and some ridiculously simple “bonus” minigames to be found in some of the levels that yield easy 1-ups.

There’s boss battles, and they’re easy, so really the only way to actually lose this game is if you do so deliberately. Which you might feel like doing, because the experience is so dull. The Kirby ball floats around the surprisingly bland levels at a snail’s pace, and if he hits the platform at the wrong angle, it can be quite a few seconds of doing absolutely nothing before the ball returns to be hit again.

Which brings me to the second big problem. The collision detection and physics are all wonky. Being precise with where you send Kirby is a case of “position the paddle in roughly the right spot and hope for the best.” No one’s going to go into the game expecting perfect physics, but a good Breakout game should allow you to have some control over where the “ball” (or Kirby) travels. It’s somewhat better than in Alleyway, but it is bad enough that there will be frustrating moments where Kirby just won’t go in the right spot.

There’s boss battles, but they’re rather simple, and despite them the game is over in a relatively short time. The level design is nice – filled with very Kirby-style enemies and personality, but it’s hard to appreciate level design when the game itself isn’t very engaging. The one redeeming feature is the music, which has its charms, and the brand power of Kirby, giving the game a good nostalgia push.

But the reality is, it’s not a great game. It’s not broken, but it is tremendously boring when success is more a case of patience than any real skill. Breakout fans would be better serviced heading over to the DSiWare shop and picking up Alpha Bounce.

Digitally Downloaded poll results #8: Will you buy a Wii U at launch?