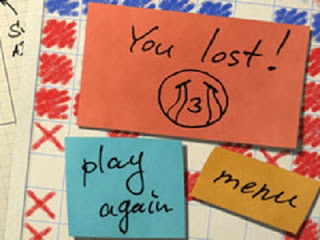 It’s hard to imagine now, but there was a time where we didn’t have iPhones and iPads. In fact, way back when, we didn’t even have the Game Boy.

“But wait,” I hear you say. “How did people have, you know, fun while travelling back then?” Why, with a bit of paper! From naughts and crosses to boxes and battleship, there were a lot of classic games that could be played with no more than a bit of paper and a pen.

What does that have to do with an iPhone game review? Virus Wars is one of those games. It replaces paper with the iPhone screen, and pens with your finger, but in every other way it works exactly the same as a classic pen-and-paper game, and is as simple too.

The virtual bit of paper is divided up into little squares (so, grid paper). The game itself is turn-based. Player One taps on the screen. When he does so, a little X appears in the square. This represents a virus. The first one has to be in the player’s designated corner, but after that the player is free to place a virus on any square adjacent to one of his existing viruses. Each turn players can place three viruses, and then it’s the next player’s turn. 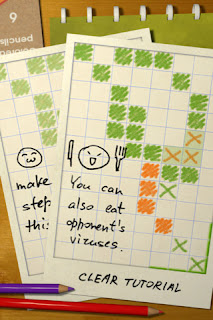 Eventually, the little army of ‘X’s will meet in the middle of the field, and the war starts. On your turn, you’re able to tap on a different coloured ‘X’ adjacent to one of your viruses to colour the square in. That then becomes a “wall,” and can’t be used by anyone other than yourself any more. The goal of the game is to wall in your opponent, because once he’s not able to place another cross, it’s game over for him.

This is a surprisingly full-featured game. There’s local and online multiplayer, a reasonably challenging AI, and a few options to play around with such as the size of the grid. Especially in terms of local multiplayer this is a great, easy to pick up game for those moments where you’re in a group with nothing to do.

But at the same time, there’s a reason people started to buy game consoles and iPhones rather than carry grid paper around: this is an exceedingly simple game with charm that is only going to appeal to people that have fond memories of playing these kinds of games when they were younger. Furthermore, this game is effectively competing in the same space as cheap versions of Catan, Risk and other board games. It’s hard to see people going for this over those more nuanced board games. Most everyone else will just gravitate towards Angry Birds.

But hey, it’s a technically proficient, entertaining little game with a good tutorial and a clean interface. There’s not much to criticise about this game, so if you’ve got a dollar or so, why not?