Last week, I covered news that the JRPG-inspired Path of the Midnight Sun will be launching in January. I was pretty excited about it. It has a strong concept: taking care outside of battles helps within battles. It’s like an entire game based on self-care! Well, I’ve now had the opportunity to play a couple of chapters of the game, and I’m now more excited than ever for its launch.

Path of the Midnight Sun is a turn-based JRPG that follows three playable protagonists. The press demo skips two prologues and Chapter 1, and while I doubt I missed much, I’m left wondering what was contained in those three parts of the game. The two chapters I played follow Lady Faratras (or “Fa”) on her journey through the countries that make up Arvium. Sixty years ago, the Demon King first appeared. The kingdom stood up to Him with the help of the Legendary Heroes, but He was immortal and could only be repelled, never defeated. It is, however, possible to contain his power within a human body. This person is known as the Vassal of the Demon King. It is Lady Faratras who bears the soul of the Demon King and on whose shoulders rests the fate of Arvium.

Lady Faratras’ story is tragic. She never met her father (the king) or mother as they died when she was very young. She was raised by the new queen, who used to be in charge of the military. The queen worries that Lady Faratras will become strong enough to claim the throne (though it is rightfully hers, let’s be real here). That created a complicated relationship that I’m hoping is explored in more detail later in the story.

Unfortunately, there’s a traitor in the castle, and Lady Faratras’ own people try to kill her. She can’t fight back at first – she can’t kill the people she’s worked with and relied on due to her emotional ties to them. This is also because she can’t be seen as erratic or people will think the Demon King is in control. She is kind, as shown by the way she treats (most of) the castle’s staff so her hesitation even in the face of death isn’t unreasonable. A mysterious stranger steps in and does the dirty work. He has red eyes like hers… but only descendants of the royal family have red eyes, and she’s an only child! I’m sure you can see where this is heading.

There is a great deal of thought put into the storytelling, lore, and politics. Slowly being led through the rather large map at this point in the game means it’s not overwhelming. The game is funny, dramatic (though slightly soapy), and touching. There are literal LOL-worthy moments that made me chuckle, such as when a stranger joins your party and they are identified as “useless knight.” “Royal chestnut” is another favourite character descriptor of mine.

Path of the Midnight Sun has four difficulty modes. “Story” is for those who want to focus on the narrative side of the game and not worry about the RPG elements. “Easy” is for those who like the RPG elements but want a relaxing experience with few challenges. “Normal” is for those who don’t mind thinking outside the box to solve challenges. Finally, “Hardcore” is for those who aren’t satisfied until they have overcome the most challenging obstacles. Each has a laundry list of effects. For example, Story mode adds 50 per cent to your character’s attack and defence. I started off playing on Easy, but the game would sometime crash when I died. So I switched to story mode, which was actually more enjoyable for me. No death? No in-game-development headaches! 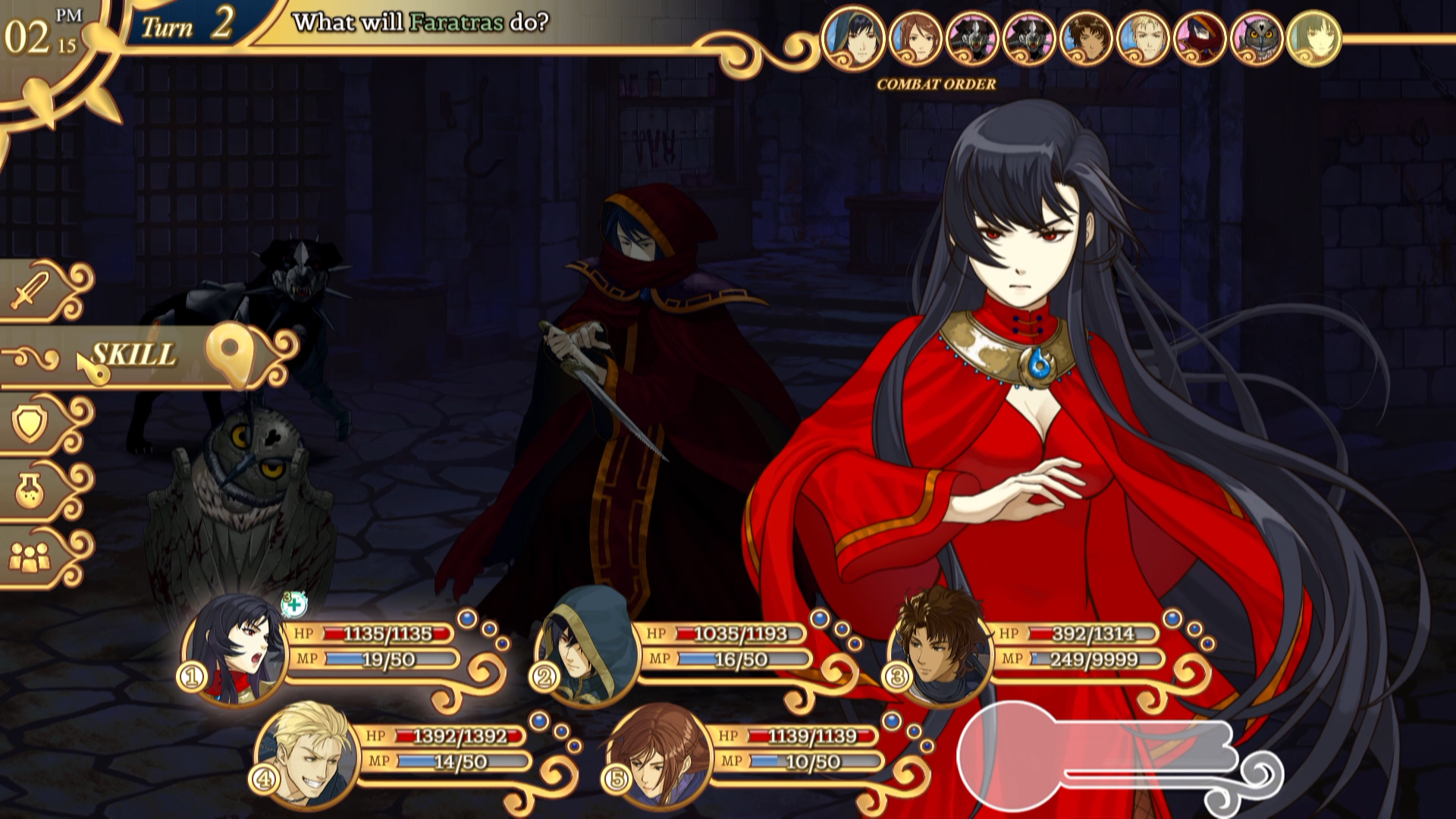 There are also point-and-click elements in the game’s “Exploration” segments. With these, you click on characters or activate some background elements to interact with them. Battles, meanwhile, feel like something altogether new. It’s not just fighting, there’s also a tactical element in terms of moving around areas where the battles take place. Moving to a spot takes up X amount of time. After Y amount of time passes, the enemy gets a turn to move. Meet on one spot, and the characters will fight. Time is always of the essence. It’s like its own currency or life force.

Adding further texture to the experience are events and food (or lack thereof) that can impact a character’s sanity. Sanity, in turn, influences the mana generated at the beginning of each turn, the damage inflicted by magic spells, and the accuracy of physical attacks. To me, this is the soul of the game. While it has minimal impact in Chapters 2 + 3 as a mechanic, it will undoubtedly become useful (or pesky) later in the game.

While most of my limited experience with the game was positive, there were parts I wasn’t thrilled with. The first is that there is currently no controller support. It’s more comfortable for me to play that with a controller, but at the same time, the experience also leans heavily on using the mouse and it may not translate well if the developers try. Secondly, there is no way to quit during battle, even without saving. I had to use Windows task manager to close the game if I wanted to do so. Regardless, the game is showing really well for a demo and those issues can be easily sorted in the leadup to its full release. This game could be a great way to start 2023.

My beloved Tiara is back! Fairy Fencer F: Refrain Chord has a release window