Pretty boys that are also pretty girls. It's all-round pretty!

Paradigm Paradox has a smart idea behind it: This is a magical girl story where most of the girls are, in fact, boys! The boys (and love interests) in this otome story magically turn into women when they are out there saving the world, before shifting back to male form for the more mundane side of life. It’s a nice little subversion for the magical girl genre, which is frequently accused of overplaying feminine tropes, and immediately helps the game stand out against all of developer, Otomate’s, other titles.

Related reading: For a light-and-bubbly VN by Otomate that is absolutely incredible, check out Cupid Parasite. Our review here.

The story concept is familiar enough. The world has basically become unliveable, with the exception of a few giant cities that have been enclosed in a dome and carefully temperature controlled to protect the inhabitants from the outside. Basically, those domes are the extent of what humanity’s few remaining survivors have to look forward to in our own futures. It’s not so grim, though, as the city that our protagonist lives in is actually pretty idyllic, even if it’s a little too mundane and boring for the tastes of a teenage girl.

That doesn’t last long, though. See, there’s a curfew in place that no one really thinks to break, but one night, our girl realises that she lost a precious pendant at the shopping mall and, in rushing to find it, finds herself outside after the curfew. She’s then attacked by monsters (so the curfew does seem to have a point!), and rescued by the magical “girl” team, who are called the Blooms. After that encounter, she discovers that she has powers of her own, and also joins the team. 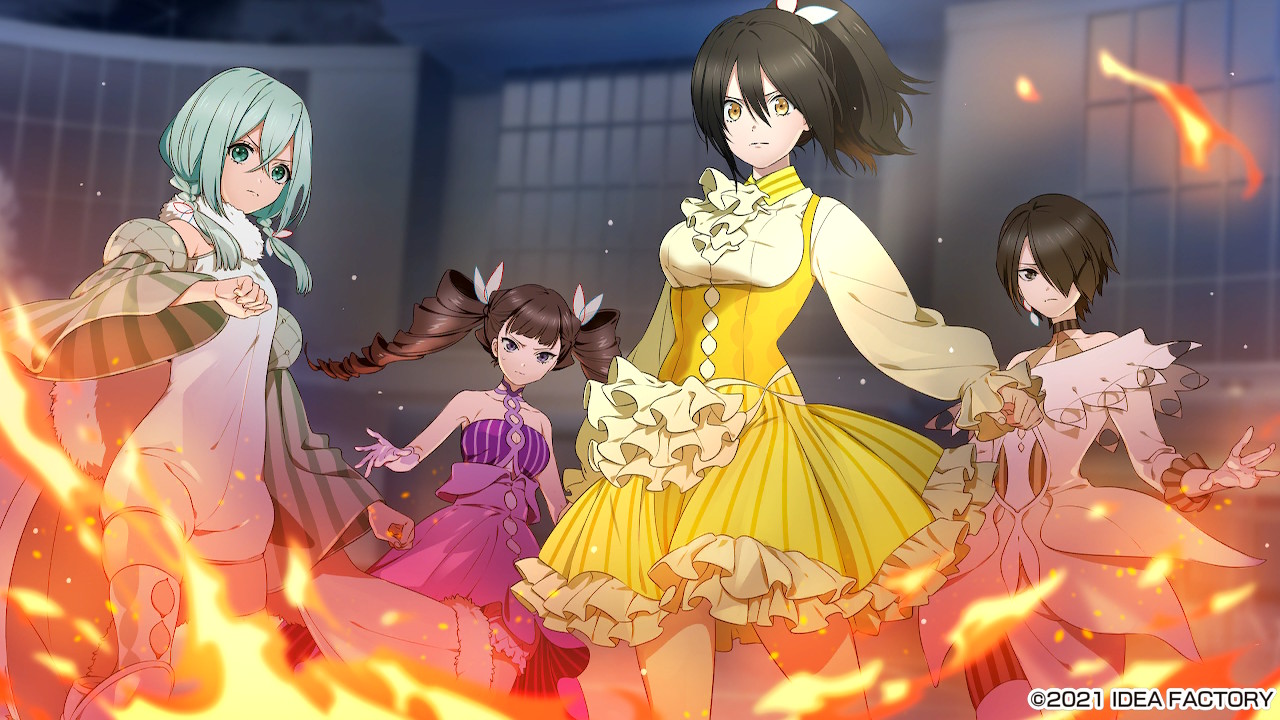 For quite some time she’s unaware of the dual nature of her teammates. She passes by them at school and doesn’t recognise them at all in boy form. But naturally, as she becomes closer to them she finds out the truth, and then it’s time to start dating one. Like all otome, romance plays a significant role in the game and the “good” endings vs the “bad” endings really depend on how you end up hooking up with your pretty boy of choice. However, unlike many otome, Paradigm Paradox seems to be relatively disinterested in this stuff (a little like how the protagonist herself says she is disinterested in boys at the start of the game). The story is far more interested in the conflict between the magical girls and these monsters, until it becomes time for the romance bits to happen, and then it seems to almost rush through those. The girl and her boy of choice go through the “getting to know one another” to the more intense emotions far too quickly to really be believable.

For example, it is made pretty obvious that the girl is falling hard, and quickly, for one of the boys when, on one of their first non-bloom related encounters, he rescues her from a falling book(!) in the library. That this pretty mundane encounter, and many of the other “dating” scenes, have so little going for them is another way that Paradigm Paradox has an uncomfortable contrast between the magical girl fantasy, and this dating stuff. It’s almost a case of two separate stories running in parallel, and one is vastly superior to the other.

Tonally, Paradigm Paradox is inconsistent, and this is the biggest problem with it. Given the unique setting, there’s a lot of worldbuilding that was needed but missing, and the various characters aren’t anywhere near as well developed, especially in their relationship with the protagonist, as we’ve seen in the likes of Piofiore and Olympia Soiree. This narrative had all the potential in the world, but it comes across as a little unfocused and cross-purposed for its own good. The fact I struggled to remember the names of the characters the moment I put the game down is never a good sign with a visual novel, but unfortunately that was the case with this one. 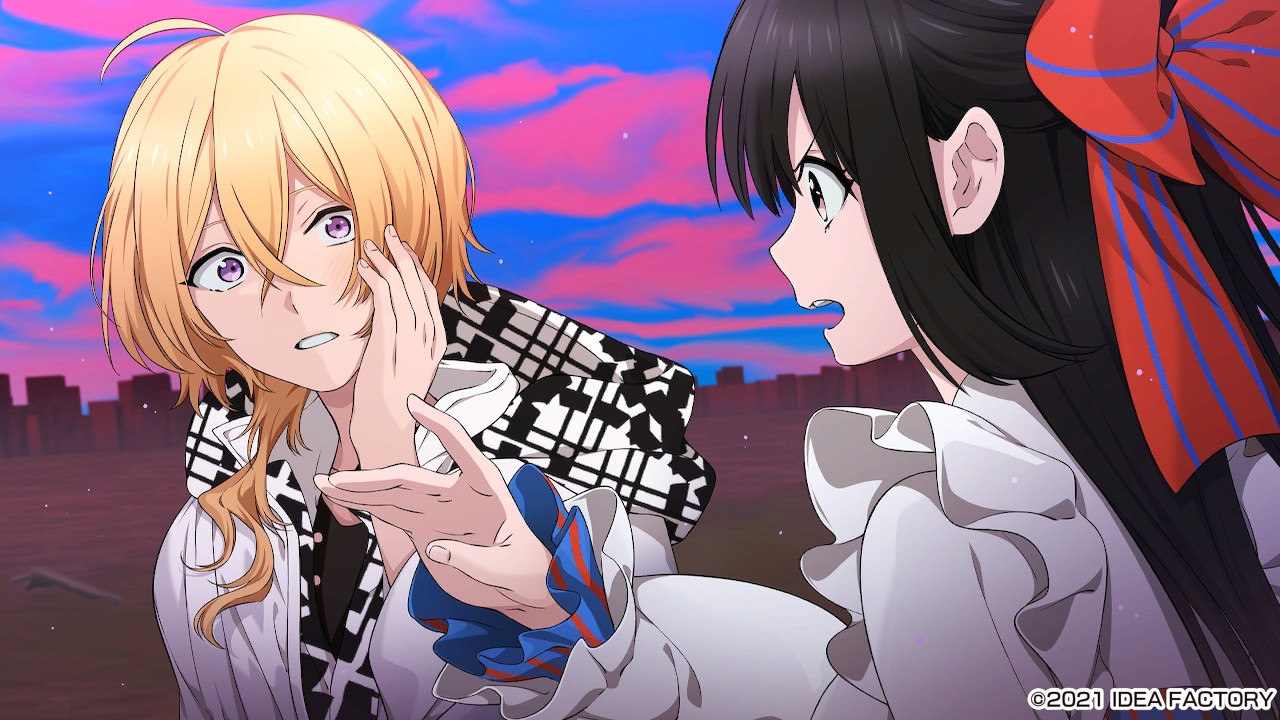 I also found the presentation to be very inconsistent, and this is unusual for Otomate, as prestige-level production values is par for the course with them. Character sprites are incredibly limited, for a start, to the point that it can be difficult to figure out which character is talking and what they’re emoting at times (which is especially a problem given that, as I said, I couldn’t necessarily remember which was which). I don’t necessarily need detailed Live-2D animated character models. I’m quite happy for sprites to be static and simply have a range of facial features to convey mood, but in this instance, the shifts are just way too subtle and that makes it hard to follow.

I also found the art style itself to be inconsistent. The sprites themselves look good, for the most part, in a bold and almost minimalist approach, and the key art CGs generally capture the drama well. However, when combined with the generally flat nature of the romance side of the game too many of these “key” scenes don’t really seem to depict anything “key.” There are slice-of-life VNs out there that have done a better job of capturing interesting anecdotes in life than this one. Still, of all the art it’s the backgrounds, in particular, that struggle to fully articulate the fascinating world that the game is otherwise describing. Every time the developers of Paradigm Paradox needed to find the exotic, they instead stuck with the mundane.

On the plus side, the vocal performances are amazing. This game was actually a collaboration between Otomate and a male voice actor’s group (8P), and that involvement does go a long way to helping to give the male characters texture. You could tell that they were struggling at times with the dialogue they were given, but they did give it a red-hot go anyway. 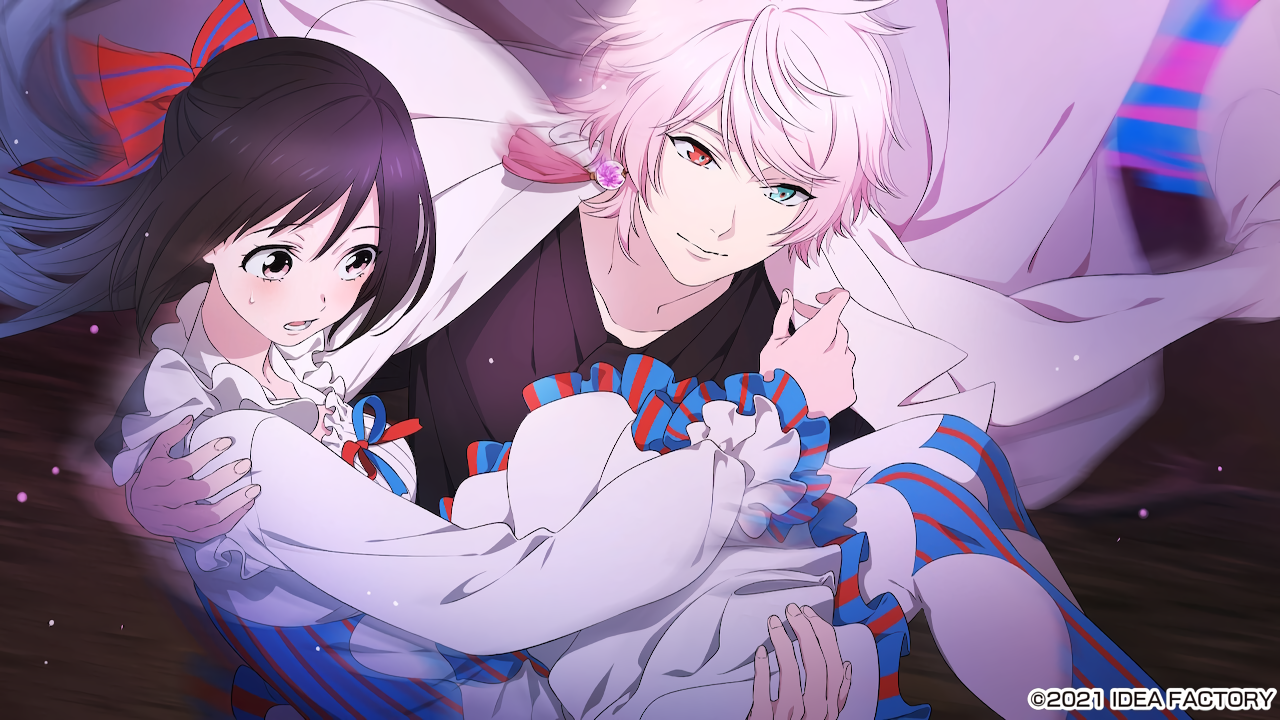 Paradigm Paradox is not terrible. It’s a perfectly readable visual novel, and the twist it gives to the magical girls story – putting it in the context of an otome – was one worth exploring. However, I’ve got to say that I expect far better from Otomate. This is a studio that produces the most beautiful visual novels, with the most vivid characters and settings, of all. Against that studio’s lofty standards this one is, unfortunately, a big misstep.

Blacktail looks set to be the fascinating game of December