We're building a shrine to M2 after this.

I grew up a Sega kid and I am still a Sega fan to this day. When Sega released the Genesis Mini back in 2019, I bought it on day one because it had a solid list of titles and I also liked collecting miniature consoles. I even imported the Japanese model… because why not? More games = more fun, and really, what else is money there for?

The Sega Mega Drive Mini 2 (or the Genesis Mini 2 if you’re American like me) is the newest miniature console out on the market, and comes long after the mini console fad ended. Is it a welcome addition under the television? Probably not. But it should be.

The Mega Drive Mini 2 is modeled after the 2nd model of the Sega Mega Drive, released later in the console’s lifespan. It has a smaller, more streamlined form factor than the original model and the miniature version is definitely small even for a mini. The first Mega Drive Mini had 42 games in its lineup, which was already good, but the Mega Drive Mini 2 does it better and contains 60 games (probably to coincide with Sega’s 60th anniversary). There are also no repeats between the two devices, so collectors won’t feel like they’re being hit by redundancy. Almost. I’ll explain why later.

I do want to point out that both the European/UK and the North American minis share the same game list (albeit with different titles and other minute differences, depending on the software) whereas the Japanese mini mostly overlaps with the Western minis but there are notable exclusives that I wish were on the Western game lists: 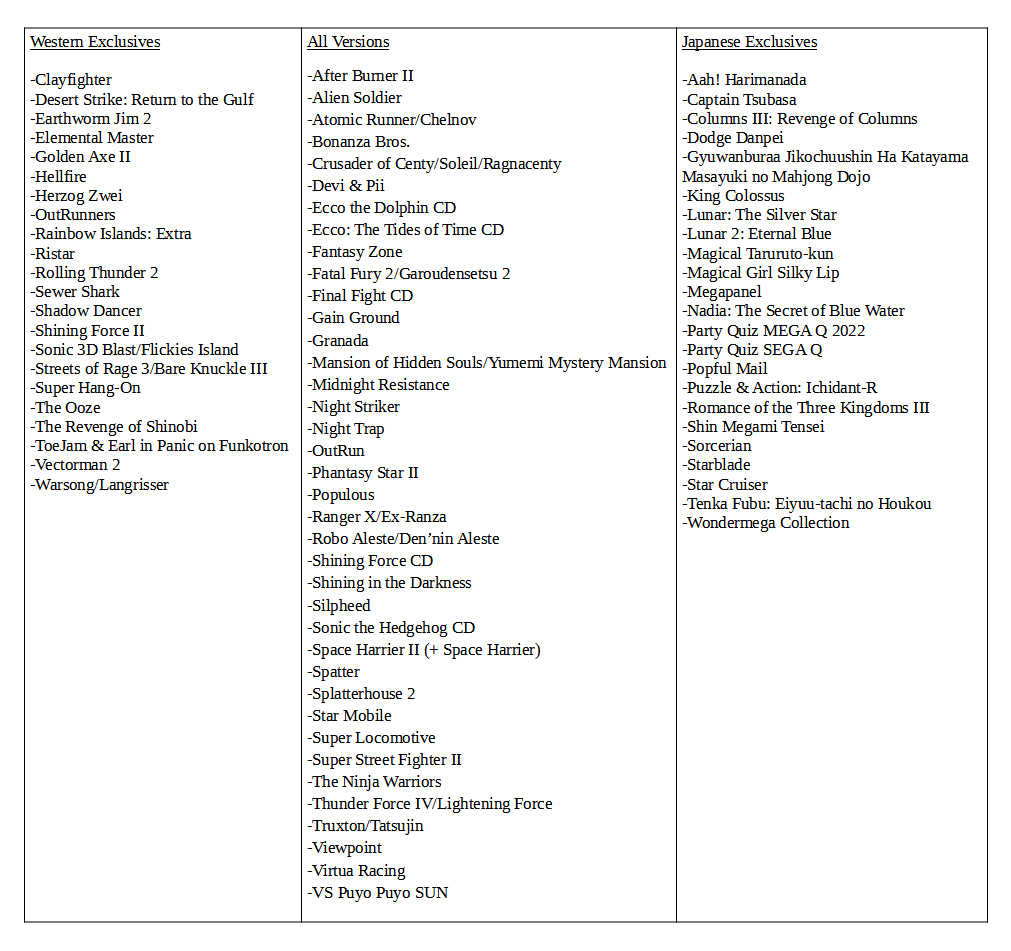 All versions contain 38 of the same titles, with the rest of the games being exclusive to their regions, as seen on the above chart. Like with the original MD Mini, changing the language in the settings menu can change the games’ ROM depending on its region. e.g. Streets of Rage 3 becomes Bare Knuckle III. Notable omissions from the Western minis include both Lunar titles and Nihon Falcom’s Popful Mail. And forget trying to import the Japanese mini and switching the region language to English because those games still remain in Japanese. I can’t say for sure but I’m assuming Sega couldn’t work out negotiations for the English editions since they’re all previous Working Designs releases and the less that can be said about Victor Ireland, the better. There’s no Snatcher too, which should have been a no-brainer inclusion but we all know Konami and how it behaves sometimes.

Lastly, Sonic 3 & Knuckles would have been an excellent addition, but it’s recently been re-released on the needlessly expensive Sonic Origins collection and with the music altered.

Software omission gripes aside, the kit itself is attractive and boy is it small. Included is the mini console proper, a HDMI cable, a micro USB power cable, and one six-button controller. While it’s a shame that there’s only one controller this time instead of two with the previous Mini, it’s the six-button pad and most importantly it feels good and plays as it should. Only the Genesis Mini 2 gets an AC adapter included in the box; you’re on your own elsewhere. The Mega Drive Mini 2 fits within the palm of my hand and it almost looks like the real thing. Almost, because all units contain a power switch like the Japanese version, as opposed to a power button with a LED power indicator on the Western models. Other than that, these look and feel authentic and I love the little details like the cartridge flap and the expansion slot that can be used for miniature cartridges and Sega CD modules. I get that Sega wanted to save money using just one mold, especially since they reported they would only manufacture and ship a tenth of the supply of the original mini between all regions. This is also why you can purchase a Mega Drive/Genesis Mini 2 from Amazon. It’s a bummer for sure, and Sega blames these circumstances on the global chip shortage. So if you really want one, you’ll have to act fast because the Mega Drive Mini 2 isn’t a cynical cash grab designed to play into your worst fears of missing out: this thing is actually pretty rad.

In my opinion, M2 is the best in the business when it comes to video game emulation and the company had a long history with Sega when it comes to its retro game catalogue. M2 is responsible for the Sega Ages collection for the PlayStation 2, Nintendo 3DS, and Nintendo Switch. Seeing the company involved with the original MD Mini instilled confidence and thankfully M2 is also involved with the MD Mini 2. Each game plays as they should, and while other reviewers have mentioned audio and input lag, I personally don’t notice it. This ain’t Sega Genesis Classics. 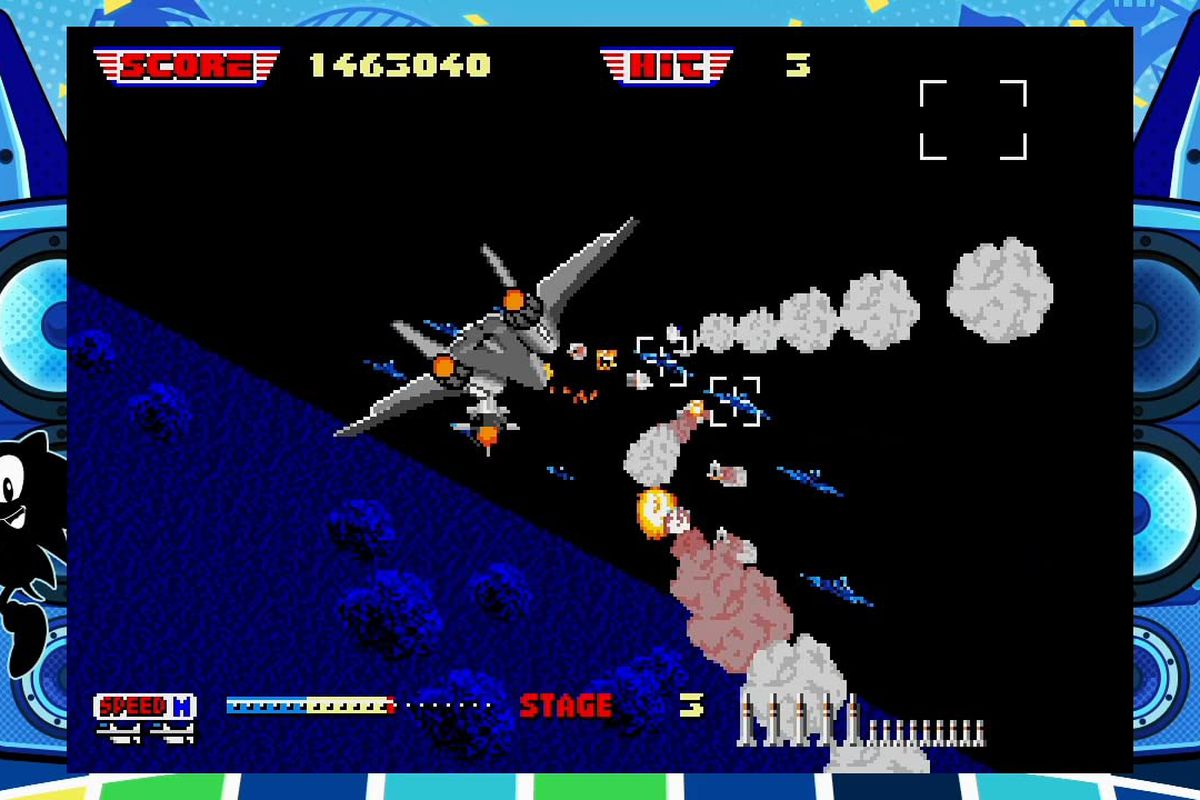 M2 is also known for going above and beyond the call of duty than just porting software: some games in the MD Mini 2 have been given optional fixes and modes, like giving Phantasy Star II an “easy mode” (faster walking speed, less grinding) and fixing the BGM for Truxton. Best of all, M2 has added four new Mega Drive ports of Sega games that were never originally on the console: Fantasy Zone (the classic Sega System 16 cute ‘em up), Spatter (a fun little Sega System 1 title), Super Locomotive (an early Sega arcade title with OMY’s ‘Ryzeen’ replacing YMO’s ‘Rydeen’ track for legal reasons) and VS Puyo Puyo SUN (a demake of a Sega Saturn title!)

In addition to these four new ports, there are two previously unreleased games that made the cut: Star Mobile (an interesting puzzle game that was shelved before it was to be released, similar to the SNES Classic’s own Star Fox 2) and Devi & Pii (a not so interesting Pong-like that was a side project by Sega designer Takashi Iizuka). And last but certainly not least, M2 made Space Harrier II GOOD.

Space Harrier II is one of two games from the original MD Mini lineup (the other being Ecco the Dolphin, this time being the CD re-release) to make it into the MD Mini 2 but this isn’t a mere repeat. Using “Sega Mark V” technology, M2 reprogrammed the game to make the sprite scaling as smooth and speedy as the original Space Harrier, which is also included as a bonus title. Both games are a blast to play. Yes, there is some flicker in some sprite-heavy scenes, but man it’s a hell of a lot better than the slow, choppy original version of Space Harrier II. I wish they did this with the other super scaler console ports like Super Hang-On and OutRun but I’m already thankful M2 actually fixed Space Harrier II.

The first Mega Drive Mini appealed to the general fan of 16-bit games whereas the Mega Drive Mini 2 appeals more to the hardcore Sega fan due to the inclusion of more deep cut software. It has its faults, like questionable inclusions in the lineup (Sewer Shark? Really??), the higher price tag (shipping included!) and the logistics of Amazon exclusivity (only 4 left in stock – order soon!), but it’s clear that there is love put in this little unit and seeing the late Sega luminary Rieko Kodama memorialized in the staff credits using the Sega CD BIOS as a backdrop was enough to give me a teary smile. 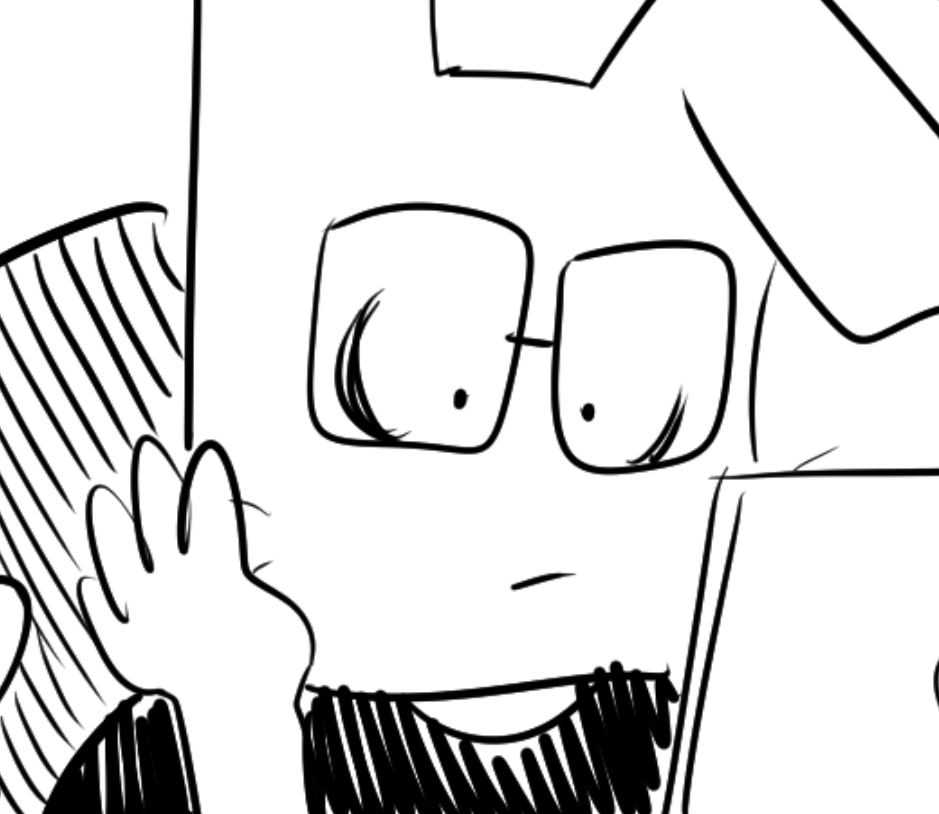 He sometimes draws some of the cartoon Dee Dee & crew that you find around the Internet. You can find him at @themistern on Twitter.

It has been getting progressively more difficult to talk about…

Endling: Extinction is Forever is now available on current-gen consoles!