Just enough space for my library of Hatsune Miku pictures...

I’m about to age myself here: I remember when getting a box of ten 3.5-inch floppy disks was a big deal. With each disk having 1.44 MB of memory, such a box was a whopping 14.4 MB of storage! That meant so many photos back then, or little arcade games that you could download off Geocities sites and then take to school to play. Remember Geocities? Oh yeah, before Elon Musk the Internet was something else. Those disks also meant entire books in .txt format. And best of all it was all that data, portable and accessible anywhere. Amazing.

Fast forward to today, and I now have 2TB of data on a drive that weighs less than a keychain, despite being about the same size as one. That’s approximately 1,388,889 3.5-inch floppy discs worth of data in one tiny little box. Look, I know a lot has happened in computing from when I was a kid to now, but having 2TB on an external drive that, thanks to USB 3.0 has a transfer rate that’s almost faster than my computer’s internal memory, really is incredible. That’s the Corsair EX100U Portable SSD.

For people that need slightly less storage than the drive I tested there is a 1TB option. For people that need more, there’s a 4TB version. Aside from the storage size, they’re all basically the same. All three versions offer 3D NAND storage, which sits at the premium end for capacity and efficient running. With the USB 3.2 Gen2 x2 interface, Corsair quotes read and write speeds of up to 1,600MB/s and 1,500MB/s, respectively. I don’t know if I ever quite got there, but when backing up a 20GB file for a project I’m working on, it transferred over in well under a minute. Usually, when backups get that big I groan and go and make myself a coffee. Here the transfer would have been done before the water had a chance to boil. 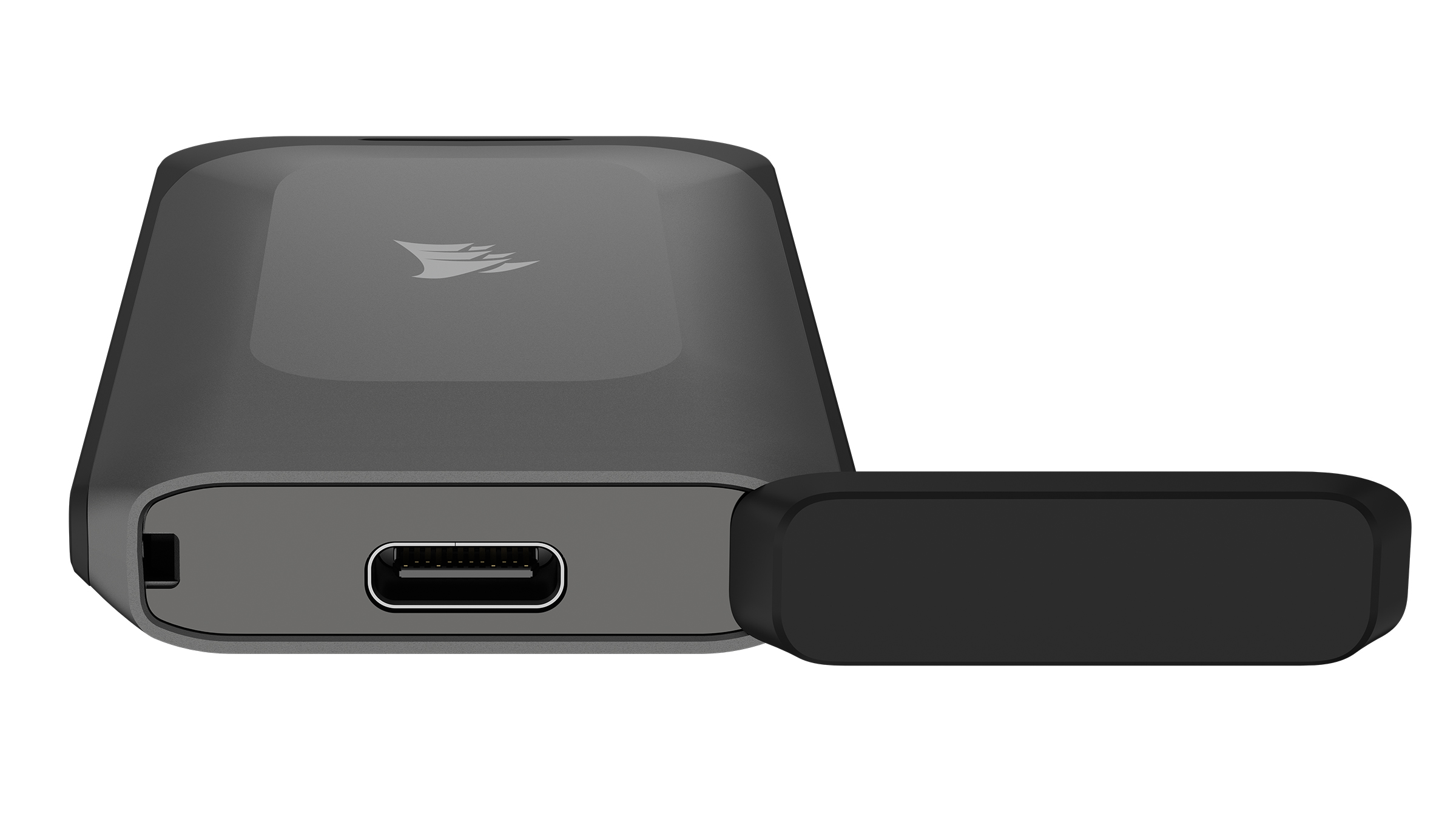 While the optimal way to use the EX100U is via USB 3, if you’re running an older laptop the box also has a Type-C to Type-A cable included, which will make it useful for just about any device that isn’t still running 3.5-inch floppy drives.

Because it’s an SSD, you don’t have the same worry about damage from bumps or drops as a HDD. I don’t recommend throwing this off a building, but it’s no different to a USB thumb drive in that it’ll sit in your backpack comfortably. It also requires no power source, meaning that it is far more portable than many of the large storage drives available on the market. It was only a few years ago where a 4TB drive in particular meant finding room somewhere for a brick. The EX100U is, of course, totally quiet in operation, and since I’ve started testing it, the only reason I’ve disconnected it is if I’ve needed that USB-3 port in my laptop for something else.

When I have needed to disconnect it from the computer, there’s a simple rubber cap that protects the device from wayward dust or a drop of water or two while in transit (note: no, it’s not rugged or waterproof), but otherwise, the slim (and, to be fair, pretty boring) design of the drive is unremarkable in design. I so suppose the purpose of this hard drive is for enthusiasts with serious data needs, so tutti fruity colours wouldn’t have gone down so well, but the black-and-grey aesthetic is unappealing even by cold corporate standards. Corsair usually puts more effort into the aesthetics than this, so I was a little disappointed in that regard. 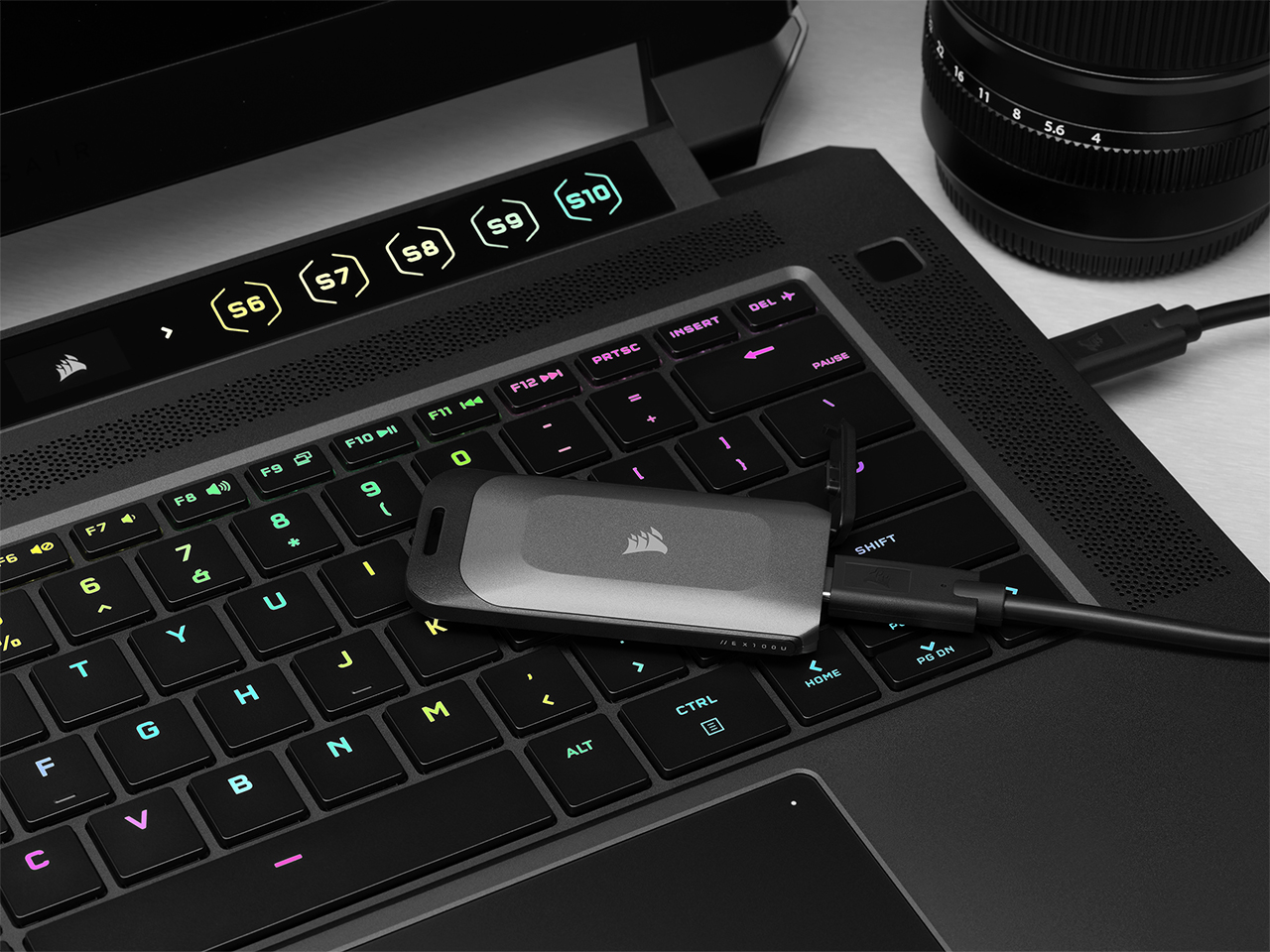 That being said the little lanyard slot means that it can be attached to anything, and the fact that it’s about half the size of a credit card (and only as this as a few of them) means that you will take it with you everywhere for its convenience and sheer data capacity. Then the only thing to watch out for is losing it. When you’ve got 2TB worth of data on a single thumbnail-size drive, you better hope you’ve put passwords on it, just in case. In that context a lack of any kind of security software on the device itself, even if it were optional is… surprising. In other words, just remember what you’ve actually backed up to it before you take it out in public. If it’s your entire HD mirrored on there, then you’ve probably got sensitive data to care for.

With prices that range from $Aus186.99 for the 1TB model, $Aus324.99 for the 2TB model and $Aus809.99 for the 4TB model, the Corsair EX100U Portable SSD is genuinely good value. It’s highly portable, the data transfer speeds are incredible, and the capacity is enough to back up a small business all by itself. There are also plenty of third-party security options for those that are worried about data loss, so while it would have been nice for there to be something there, it’s also not really a problem.

I love Sega. I grew up a Sega kid and…

Here are the highlights from today’s Nintendo Indie World Showcase