The Trimui Smart is your new best travel buddy

The Trimui Smart is a smart (hah) idea in an increasingly loaded market. Thanks to devices such as the Steam Deck, Ayn Odin Pro, and the Ayaneo range, portable emulation options handhelds have leaped, massively, in the past year. It’s now relatively easy and often inexpensive to play everything up to and including the PlayStation 2, Xbox, and Gamecube/Wii on these devices.

It does mean that manufacturers like Anbernic, Powkiddy and Retroid have been left in the lurch a little. These companies have hovered around PS1/N64/Dreamcast emulation for quite some time, and while they can come up with some fun designs at times, there’s just not going to be much of a market for that level of emulation device. Not when the Odin Pro, in particular, is there and only mildly more expensive.

However, there’s still opportunities out there for modestly-powered hardware, and the new Trimui Smart is an excellent example of where these companies can be pitching themselves. The Smart is a tiny little device, with a 2.4-inch IPS screen, and weighs almost nothing. This is something you can put in your pocket and toss in your bag without a second thought, and while it might not have the features of the Odin Pro, for the retro gaming experience, it gets the job done at such a cheap price that were something to happen to the device, you wouldn’t be quite so devastated (I can’t see myself ever taking the Odin Pro out of the home for this reason).

The Trimui Smart emulates everything up to the SNES and GBA eras flawlessly. It can do PlayStation 1 well as well, but the lack of a second shoulder button and analogue sticks do limit the range of games it can play significantly. Really, it’s a classic Nintendo machine, and from Final Fantasy VI on GBA through to Super Mario Kart on the SNES, it offers great, instant pick-up-and-play option. With about three hours of battery on a charge, it’s also sufficient to get you through a commute or wind down in the evening before bed. It has a couple of features that are really neat, too. One is multiplayer. You can either play wirelessly or via USB 3.0 connections with other players, and for certain games (hi, Pokémon) that adds some critical functionality that most other emulation devices lack. What’s the point of levelling up that Jigglypuff to 99 if you can’t show it off via a battle? The Trimui Smart is also quite good for arcade games, and many of them are also best experienced with a pal.

The device also has Internet connectivity, which could presumedly be used to bring in firmware patches and other updates in the future, without having to go through the processes that you usually do to update firmware on emulation devices. With the Trimui Smart we’re getting so close to a device that is as assessable to the non-technical players as the “legitimate” consoles.

There’s even Bluetooth, for hooking up your favourite pair of earbuds, but this is one area where the Trimui Smart falters. Basically, it does the connection just fine, but the volume controls are broken when you do. No matter what you set the volume to, it blasts into your ears at full volume, and the Smart goes loud. I don’t think I’ll be using this feature on the console, and that’s a problem since the only wired connection port is a USB 3.0 port, so you’ll need an adapter to use your wired headsets. It means that on the train you’re probably going to have to play without volume (unless you’re one of the arseholes that don’t care if you subject other people to the music of your devices).

Still, that’s one minor complaint for a device that is otherwise excellent. The buttons are of a super-clicky variety, and they’re a joy to press. The screen’s not quite as good as the Anbernic RG280V (which I still consider to be the shining standard for small form factor screens), but it has a good range of brightnesses and viewing angles. The console is incredibly comfortable in the hands (even mine, and I have large hands), and the four different colours that it comes in adds a fun touch. 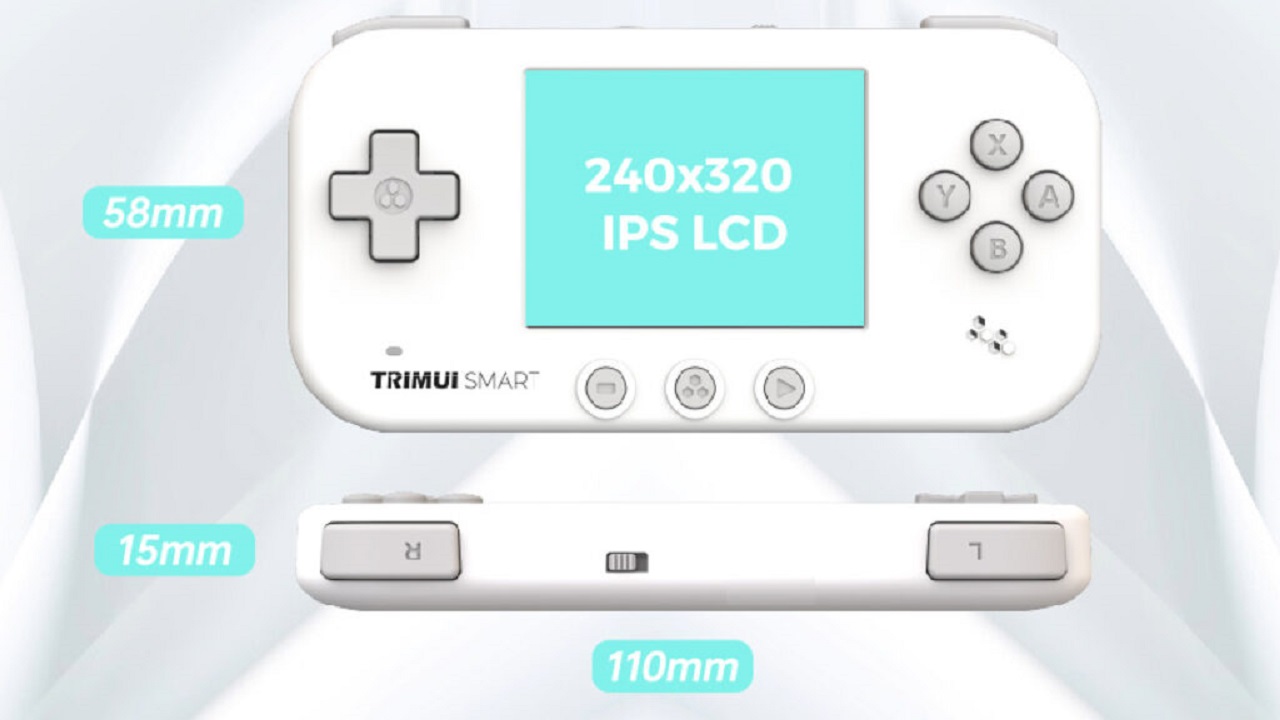 I wasn’t expecting to have any need for any more emulation consoles, with the Odin doing all the work at home and then the Retroid Pocket 2+ for gaming on the go, but the Trimui does fill a gap for me. As someone that can be very OCD about some things (once a screen gets a scratch I tend to lose interest in ever using the device again), I do want a robust, tough little device that I can throw in my bag and not worry about too much. With no control sticks that can catch and break, a tough little plastic shell, and a modest price tag, the Trimui Smart’s actually going to be my travel device going forwards. In fact, I’m considering getting a few of them for multiplayer with my wife on the train, plane and wherever else we have some downtime while out and about.

As long as you’re comfortable with the limitations of this one (and in fairness these days it’s difficult to get excited for an emulation console that is “just” designed around GBA and SNES), then you’re going to have a great time with the Trimui Smart.