If I ever have a real kid, I should call her Chilia. Good name.

“Princess Maker-likes,” like Lair Land Story, are a niche within a niche, but it’s a genre that can be oddly compelling. They’re spreadsheet simulators, in which 90 per cent of the game involves carefully managing a girl’s development by carefully selecting her daily activities. But while that might sound dull, there’s something endearingly human about watching a character “grow up”, and seeing how they can be carefully shaped by focusing their limited time for development in different ways.

Related reading: Another recently-released “Princess Maker-like” is Long Live The Queen. Our review.

The “princess” in this particular story is named Chilia, and she has a mysterious past indeed. Her adoptive father found her while fighting in the last massive battle in a near-apocalyptic war. The thing is that it was Chilia herself that finished it, because she, through the power of some weird magic, exploded into some massive ball of light that caused everyone on all sides to simply stop fighting. She then collapsed. Her “father” brought her back to the city, but unfortunately, on waking up she realises that she doesn’t remember anything about who she was. Not to matter, though! The guy adopts her formally and sets about learning the ropes of guardianship.

There are four major types of activities that you can put on Chilia’s weekly schedule. You can send her off to school to learn a variety of different subjects, or ask her to work to earn a bit of money. A third action involves charitably helping the community to rebuild after the war, and then there’s the option to take some time off and rest and relax in a number of ways. Most actions will boost a couple of Chilia’s stats, from a dozen or so categories, and then reduce a couple of other stats by a small amount, forcing you to balance out activities so no stat bottoms out. More significantly, activities will increase Chilia’s tension and tire her out, which is what the rest days are there for. 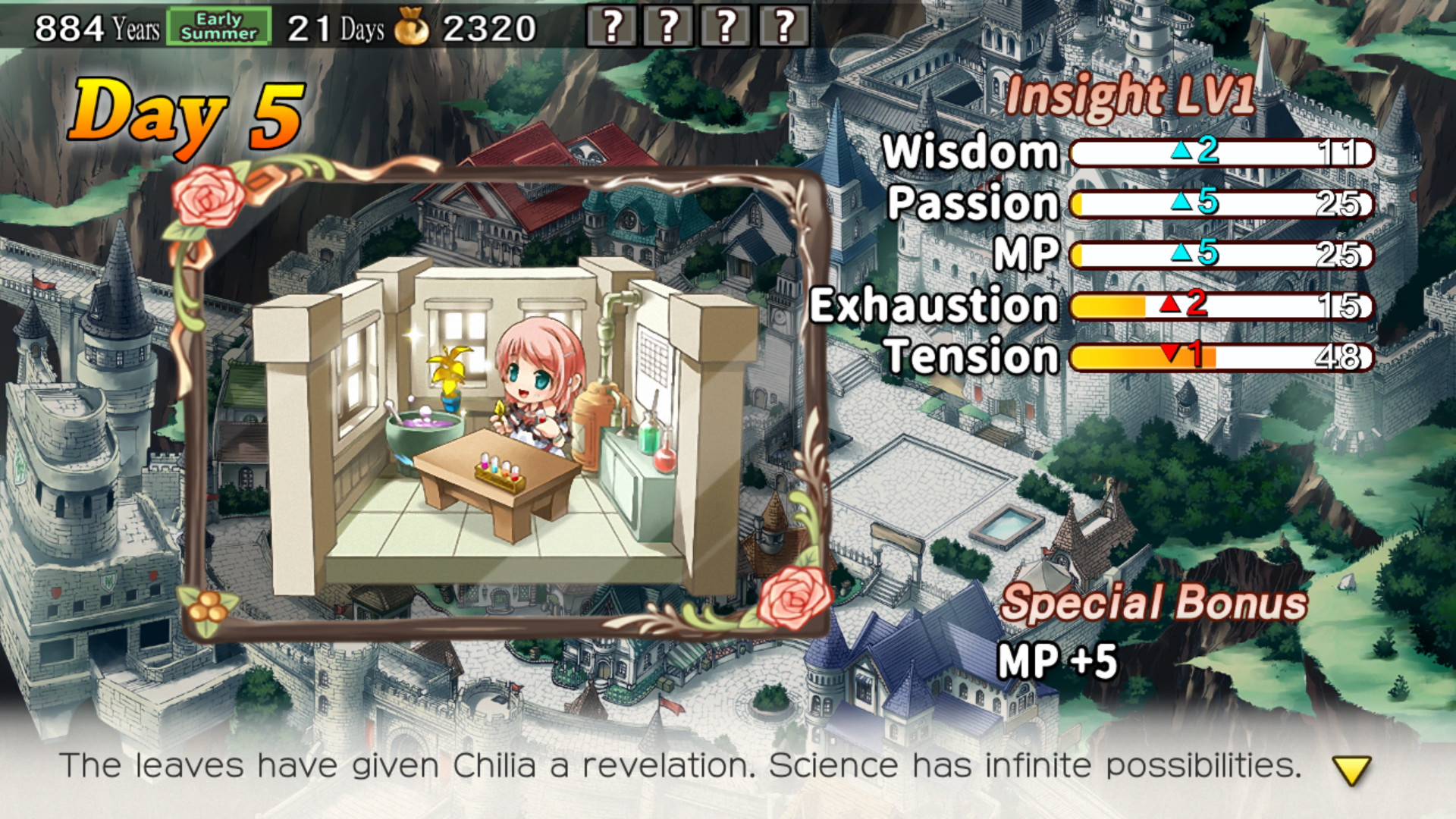 The balance between the movement of these stats is good, giving you plenty of opportunities to tailor the character as you like, and at a good rate without feeling too punitive and forcing you to spend too much time in downtime waiting for Chilia to recover from her burnout. As is standard for the genre, each of the activities is accompanied with a cute little animation of Chilia doing her thing, and the game in general has a nice personality about it.

Between these scheduled work and learning activities, you have the opportunity of dropping into town, where you can go shopping, hang out at the bath (which, thanks to the war, has been left in a state where it has been converted into a mixed-sex bath, for much hijinks), meet various people and enjoy a bunch of interactions between Chilia and her new community. It’s genuinely impressive how many cut-scenes and key moments the developers have worked into the game, and while you’re naturally going to see event repeats on the second play-through, you’re never going to go for long without a “cut scene” giving you a bit of a gameplay break from the day-to-day tasks of being a (digital) parent.

You’ll realise soon enough that there’s nowhere near enough virtual time in the virtual day to bring Chilia up to be a generalist, so you’ll need to hone her focus for each play-through. Naturally, on my first play, I decided she was going to focus her studies on the arts and philosophy, ignore piety and not spend too much time working. This meant that money was tight and all the benefits of religion were locked off to Chilia, but I can always try and experience the next time I kick back with the game. There are a large number of endings available, though there’s not really any “best” path through, and none of those endings feels inherently superior. Just different. Lair Land Story is about the journey, not the ending, though the flip side to that coin is there are certainly endings that you will prefer, and that’s reason enough to try and see them all. 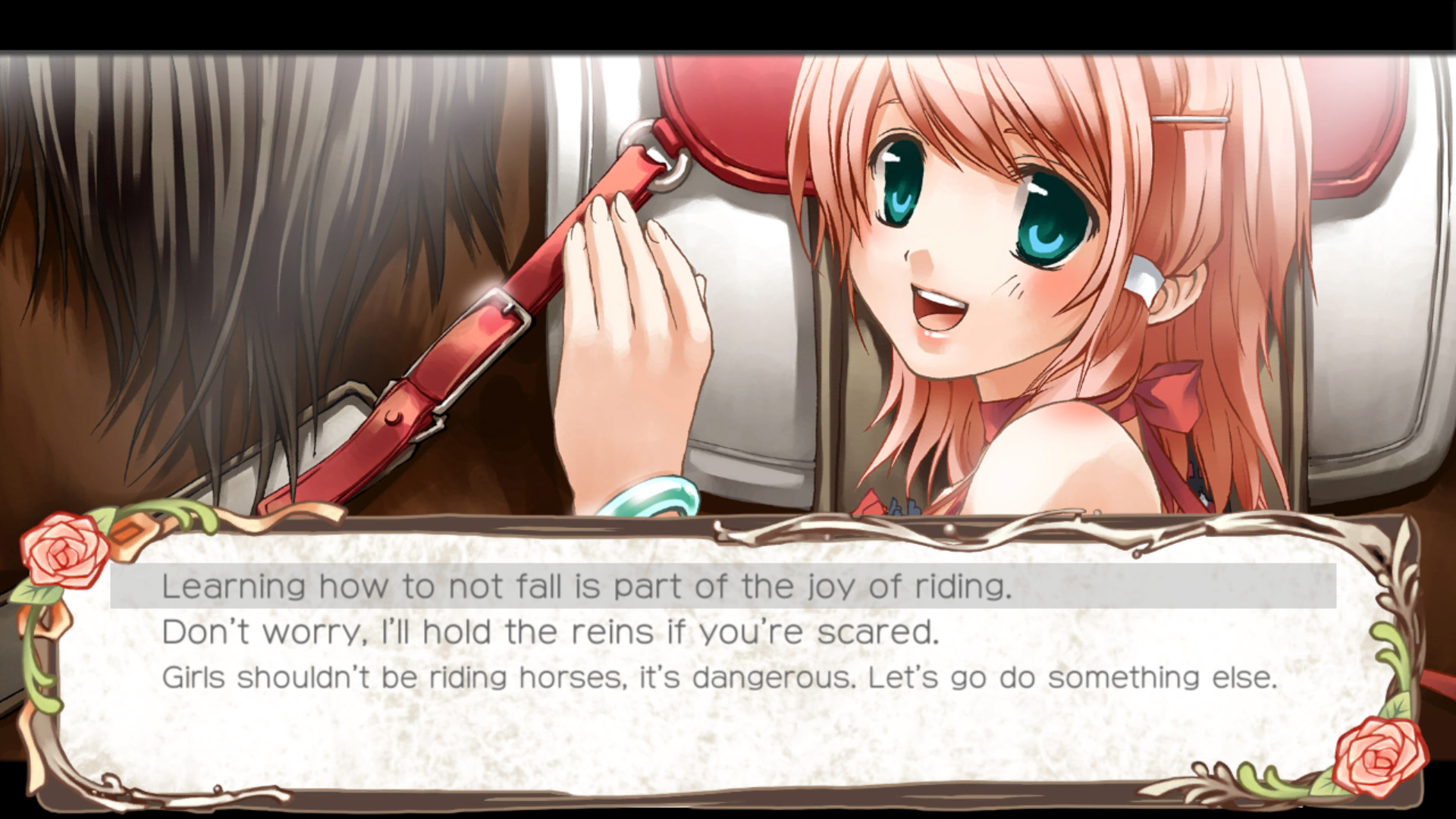 For a game that’s so menu and numbers-heavy, Lair Land Story has a nice aesthetic to it. The cut scenes are delivered like you’d expect to see in a visual novel, with character portraits that are nothing to complain about at all. The work and study scenes have those little animated clips I mentioned, and for most of the rest of it, you’ll be looking at a large portrait of Chilia standing there, waiting for you to set down her next set of instructions. The game’s limited budget is pretty clear here, as the lack of animation or even range of experiences makes this a little like looking at a mannequin doll for great lengths of time, but at least you can play dress-ups with the various costumes and hairstyles that you can unlock.

There are little areas here and there where I might have liked to see a little more thought go into the design, too. When Chilia works and studies it can be hard to keep track of all the stats movements, and you’ve got to then go fishing in the status menu to get a precise look at where her development stands. Those stats are far too important to bury behind a menu option. Also, for some reason, one of the two “negative” stats of Chilia’s goes up (exhaustion), while the other is negative as it goes down (tension), and that was just a silly design decision. There are also inconsistencies in the voice acting – both in terms of the quality of the actors and the mixing of the volume. You can tell that the recordings for this game were done remotely by people with home studios.

But those are all very minor gripes and given the extremely niche nature of Lair Land Story it’s not something the people that would be drawn to play the game will hold against it. The main thing is that Lair Land Story gets the most important element of the genre right. Chilia is adorable and you will be invested in her story, and builds around it a fun set of characters, some nice aesthetics, and a good sense of humour. This is a simple and modest kind of game, but it is very warm and warming, and sometimes, those are enough in games.

‘Big bosses, beautiful graphics, and cooperative shooting’ is the order of the day in The First Descendant