I still maintain all Pac-Man games should be R18+ rated for encouraging drug use.

I had no idea that the original Pac-Man World was so well regarded. I had never played it, nor any of its sequels (despite being a general fan of the yellow pizza-man), but in researching the original for this review I did see that it was sold and reviewed very well indeed. Having now played this ground-up (but, based on the footage of the PS1 original I saw, pretty faithful) remake, I can see why. This is good, honest platforming fun.

For context, Pac-Man World: Re-PAC came out just as the 3D platformer genre was hitting its peak. Banjo-Kazooie had been on the market for two years and arguably the best 3D platformer not made by a Nintendo company, Rayman 2, meanwhile, was released in the exact same month as Pac-Man World. Crash Bandicoot was only three years old and the genre clones – things like Donald Duck, Goin’ Quackers – would only start to flood the market the year later. So Pac-Man World, while not exactly innovating or pioneering the genre, was one of those formative titles that were there right at the start. Unlike the open-levels and hubs approach of a Banjo-Kazooie, however, Pac-Man World is split up into smaller discrete levels and, if anything, looks like a precursor to Super Mario 3D World or the recent Kirby game thanks to its camera perspective.

You do see a lot of what would become standard for 3D platformers in it, too. Each level has a wealth of things to collect, and the need to backtrack and explore every nook and cranny to find them all. This frustrates many, but entertains and challenges plenty more. Many of the pick-ups are optional, though of course, if you want to fully complete the game you’re going to need to track them all down. On top of that, each new level adds new gimmicks as you play, to keep the variety strong from one stage to the next. There aren’t that many levels in Pac-Man World (six worlds, each with three or four levels), but because you need to collect all the “PACMAN” letters to unlock bonus levels, and there are bonus mazes to find in some levels, the game’s going to take a while to fully complete. 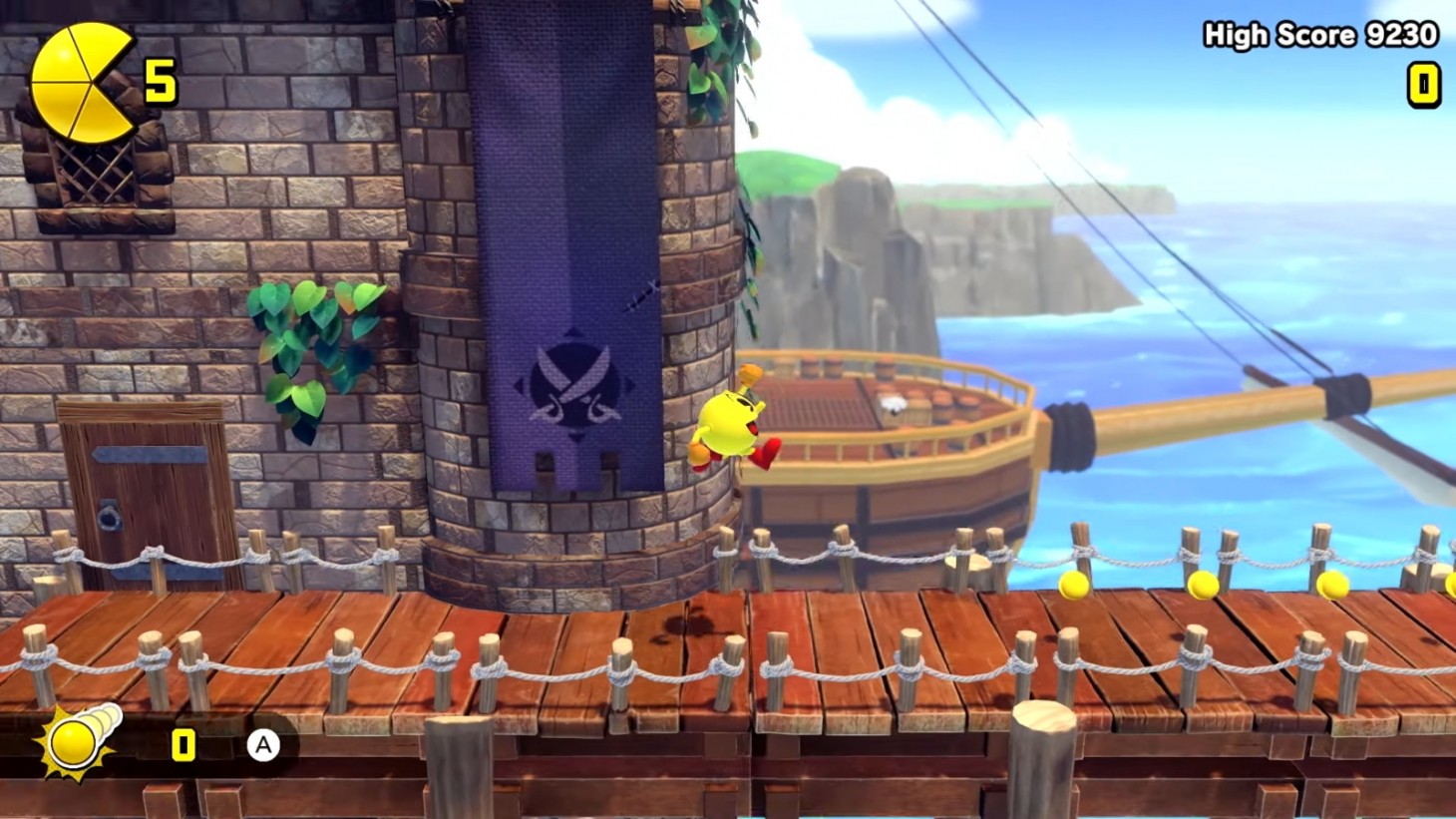 The mazes are my favourite part. Each is essentially an interpretation of the classic Pac-Man arcade game, themed after the game world that they belong in. So there’s a space maze, a jungle maze, and so on. In those mazes you’ll be doing what Pac-Man usually does – munching dots and dodging ghosts – only with a modern sheen, and these play really nicely. They are a necessary element for Pac-Man World too because, while the 3D platforming levels of Pac-Man do play well, there was a risk that without some of this classic maze action the game would have lost sight of the titular main character’s tradition. As it is, though, this feels like one of the most authentic Pac-Man games that isn’t a riff on that classic arcade cabinet that I’ve ever played.

With that being said I will say that, like with the recently-released Klonoa collection, and indeed most classic platformer remakes and remasters, Pac-Man World is more for the nostalgic than newer players. You don’t necessarily need to have played the original – as I hadn’t – but you do need to have fond memories of how simple these kinds of games generally were. Pac-Man only has two moves to get around – a butt-stomp and a dash, and while there are pickups along the way that can give him temporary power-ups (most notably a metal mode that allows Pac-Man to platform underwater), and the levels are designed around variety from one to the next, the moveset will come across as limited. Not every “retro” platformer was like Banjo-Kazooie, and sometimes we need to play something like this to remember what the bulk of the genre did look like back then.

The team have done a really nice job with the update, though. Pac-Man World was always a colourful, vibrant platformer, and this remake has been a ground-up one, allowing the developers to take advantage of modern tech to saturate the colours further. Pac-Man moves with some nice personality (it would have been great to see a bit more animation variety though), and the six worlds of adventure that he moves through are vibrant and filled with energy. The only other frustration is that there are some of the gameplay elements there are in there for variety but would have been great to see them expanded out to offer more. There’s a kart-racing mini-game, for example, and a SHMUP bit. Perhaps these aren’t enough to be full stand-alone releases (and the last time they tried on a Pac-Man kart racer it was a disaster), but the developers could have taken a cue from the likes of Monkey Ball or the Captain Toad levels in Mario 3D World to make something a more substantive side distraction, because as it is these minigames leave you wanting much more because they’re just too limited in application within the game itself.

When I find that my complaints largely have to do with wishing there was more content in a game that is already perfectly sufficient, I know that I’ve had a good time. It feels strange to call Pac-Man World a “classic,” but the numbers don’t lie. The original game sold 1.5 million units, was well-received by critics and justified a number of sequels. Bandai Namco is most justified in trying this on to see if there’s room to revive the Pac-Man World property with new games, and based on the quality of this, I’d like to see what a new Pac-Man World looks like down the track.

A Space For The Unbound is delayed until further notice, and for unpleasant reasons