This is not the Digimon you were expecting.

Admittedly I wasn’t following Digimon Survive too closely in the leadup to release, however, I did know it was going to be a tactics JRPG featuring collectible monsters. That in itself was exciting given that I have fond memories of Pokémon Conquest back on the DS. What I was not expecting was for it to turn out to be a blend of Utawareumono and Death Mark, and that… well, I love that so much more.

To characterise Digimon Survive as a tactics JRPG is doing it a disservice. There is a tactics combat system in there, but it is sandwiched between lengthy visual novel sequences that are the real meat of the game. That’s where the comparison to Utawarerumono comes in, as the pacing is roughly the same as in that series, and while I rankle at the thought that people would be disappointed in reading their way through a game (as though reading’s a bad thing?) it would be remiss of me if I didn’t point out that people looking for a tactics JRPG experience would be better served going elsewhere for their fix.

For everyone else, what’s important to note is that Digimon Survive weaves a most excellent tale. Imagine The Lion, The Witch and The Wardrobe, but only horror and a parable for Shinto spirituality rather than Christian. The story kicks off with a bunch of kids on a school excursion to a far-flung remote corner of Japan. They discover an old and disused tunnel, and after passing through it find themselves in a very different world.  Unfortunately for them, it’s a sinister world, as they soon discover thanks to a distinctly Stephen King-like fog and a bunch of spirit monsters that start attacking them. 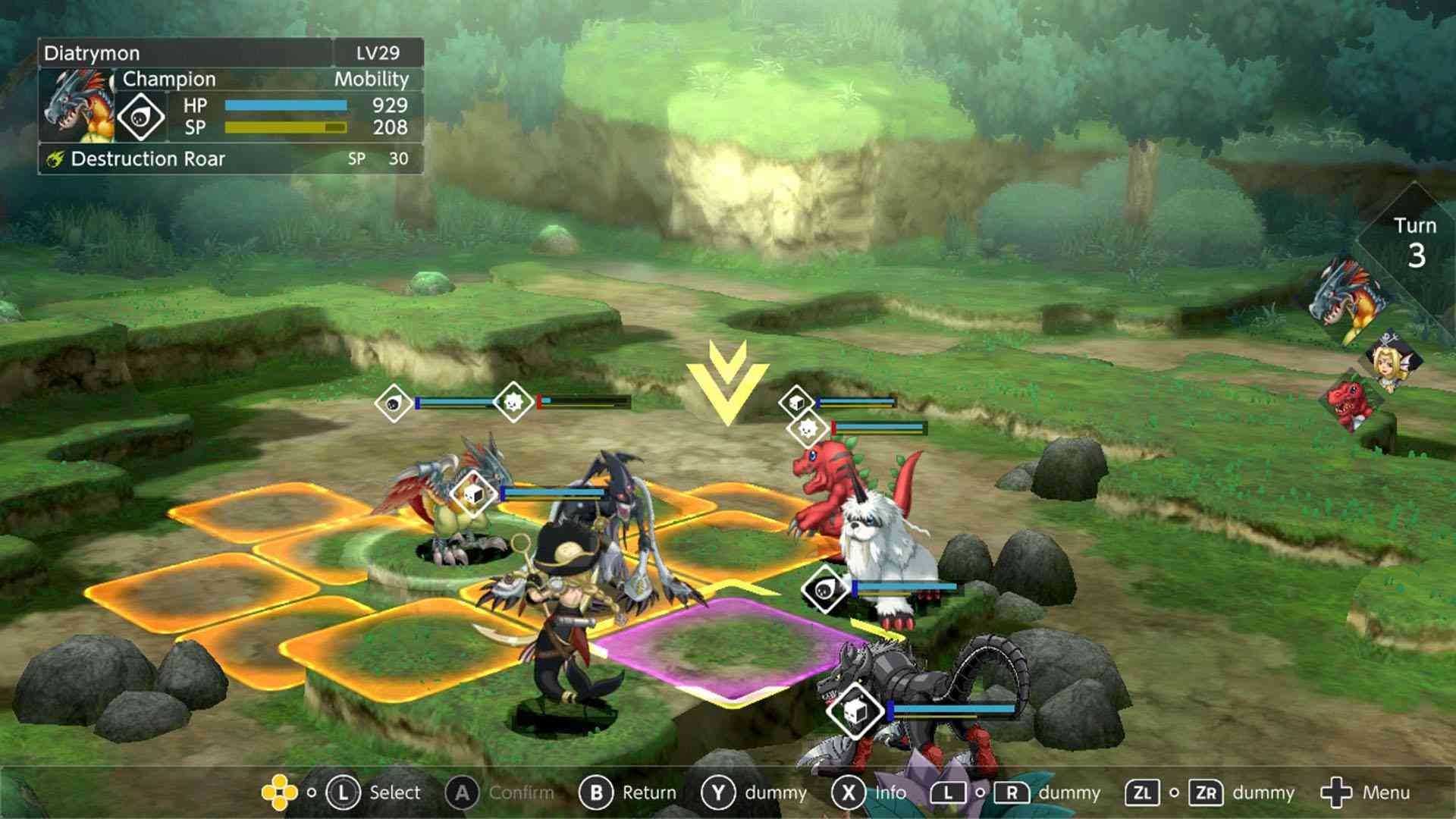 Luckily a group of spirit monsters (Digimon, folks) come to their rescue and give them a sporting chance in their hostile new home. From there Digimon Survive because a story where the group have three goals: firstly, to survive (hence the title, duh). Secondly, to work out why they’re there and where/what “there” even is, and thirdly, to work out how to escape. Digimon Survive does that by borrowing conventions from adventure games and, especially, the aforementioned Death Mark and Spirit Hunter: Ng. As obscure as those two horror VNs are, I am almost certain the game’s director is a fan of them because, structurally, the games are the same.

Throughout the adventure, you’ll find yourself in situations where you can choose to explore around a half-dozen different locations (or more) within a location. Your task is to scour them for clues that will help you unlock some kind of mystery and push on. For example, one early example has you exploring a dilapidated school that has been overrun by a demon-spider for a way to cut through a mess of cobwebs and arrive at its inner sanctum. This is, again, exactly how Death Mark and Spirit Hunter worked, and while the horror is significantly less adult than in those titles, it’s all there, from the atmosphere to the very real sense that survival in this particular story isn’t guaranteed. For any of the characters.

I loved the characterisation that the developers wrote into Digimon Survive. Yes, it has a stronger-than-mild whiff of the anime about it, but that was always going to happen with this property. What they get absolutely spot on is building weaknesses and flaws into all the characters. They’re not infallible heroes, nor unflappably stoic about their situation. They’re human. Painfully so, and that makes them far more relatable and interesting, and keeps you hooked into the narrative, to see how their arcs play out, if nothing else. 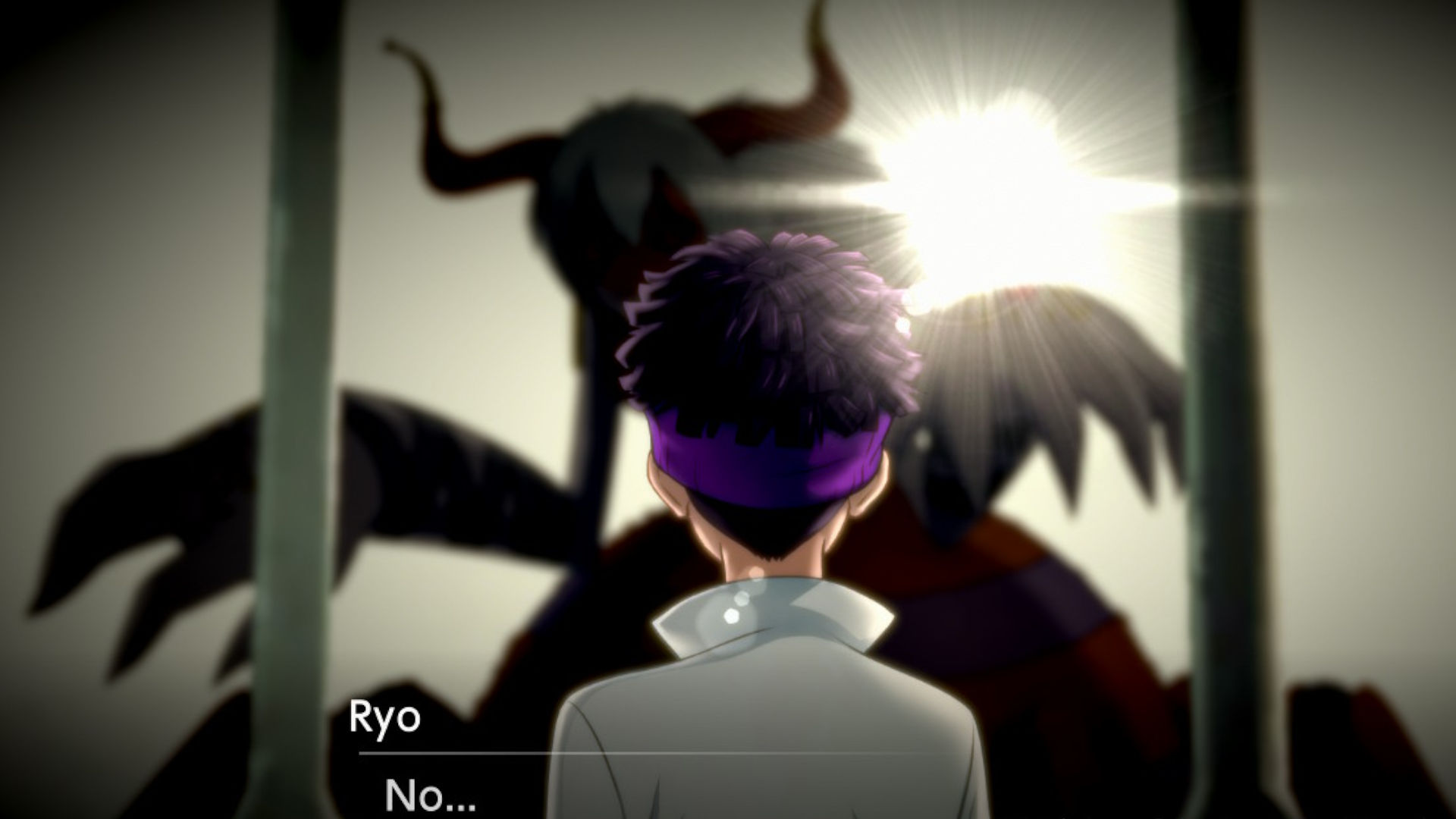 The Digimon, meanwhile, make explicit the Shinto philosophy that has always been behind them, much as the talking animals of The Lion, The Witch and The Wardrobe did to abstract the ideas of Christianity. The game’s script actually says this in as many words: one of the core precepts of Shinto is that spirits are everywhere and in everything, and that those spirits can – and have – been elevated to a kind of deityhood for any number of reasons.

Shinto promotes this idea as a way of encouraging people to respect the natural and man-made world equally, and that’s a common theme through Digimon Survive, albeit often tinged with the darkness of the horror themes. It even plays into the system of recruiting new monsters to your cause. To recruit them, you must first battle them, at which point you need to go through a Shin Megami Tensei-like negotiation with the monster, saying the things they want you to say, based on their personalities. If they like your answers well enough they’ll be open to joining you. Unlike SMT this system doesn’t feel randomised and arbitrary at times, and instead, success is just a matter of fighting the same monster often enough that you know the right answers by rote. It means you’ll probably fail the first few times while you learn the monster’s unique tastes, but then success becomes much easier, which is altogether a neat abstraction of the idea of coming to respect the creature before it’ll join you.

Digimon Survive has a good combat system, as infrequently as you might engage with it. It’s standard tactics stuff, but because there’s a wide range of monsters to recruit, level up, and evolve, it keeps that Pokémon-like quality that something like Utawarerumono lacks. The game is never too difficult, and at most points, you’ve got a free battle area where you can grind up some experience levels, so you’re largely free to be experimental and play around with team combinations, and that’s exactly what you want. My only issue with Digimon Survive comes from there being a mild clash between the aesthetics and the theme. For a game that features a horror theme that’s a fair parallel to Death Mark (I deliberately haven’t gone into spoilers here out of respect for the game’s desire to surprise players, but the stakes are mental AND physical), the art is a little too colourful anime for me. Don’t get me wrong, it gets what it needs to done, but I find anime horror works best in one of three ways – either it takes “bright and colourful” to a surrealistic, off-putting extreme (Danganronpa), it does sublime darkness, like Death Mark, or it goes extreme, like Saya no Uta. Digimon Survive occupies an unfortunate middle ground where events happen that can be truly horrible, and you could have easily drawn something horrible to depict them, but the artists never go quite far enough to make you as uncomfortable as you probably should be.

Nonetheless, this is a profoundly effective game. Digimon has always pushed a little harder than Pokémon to actually spin a meaningful story around the property, and Digimon Survive is not the first time the series has flirted with darker material. Thanks to excellently-flawed characters, clean tactical combat, and an eclectic but interesting blend of genres, Digimon Survive stands out as one of the most different and creative JRPGs you’ll play this year. This, of course, is exactly what we like to see at DigitallyDownloaded.net.