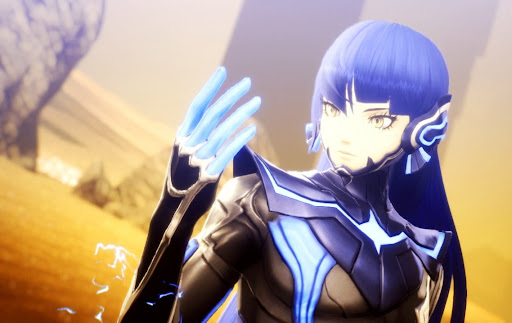 I’ll be upfront about this: Reviewing Shin Megami Tensei V is going to be a pain because all the good stuff that is really worth talking about falls firmly within spoiler territory. The think piece that I will inevitably write six months from now, when I won’t risk a lynching from touching on the important narrative points, will be the better analysis of SMT V, but right now I do need to write a review, and the best summary of the game is this: In a year that has been overflowing with incredible JRPGs, SMT V stands out as something truly special.

To start, this is a dark game, and as much as we all joke about Persona fans finding their way to SMT (despite Persona being the spin-off), I do genuinely wonder how the Persona fans will respond to this thing. Shin Megami Tensei titles wear their nihilistic and existential themes on their sleeves, and when that’s combined with a kind of open-ended thinking around morality, you’re quite welcome to go some dark places before you arrive at one of the endings that come at the end of the 80-odd hour journey. But what has always impressed me about this series is just how willing it is to back the dark themes up with dark aesthetics. Shin Megami Tensei has always embraced discordant (albeit incredible) music, harsh imagery and unflinching nastiness at times, and the additional power that has been afforded the developers with SMT V has allowed them to really hit some striking tones.

The end result of this is that SMT is not accessible. But here, in this instance, that’s okay. We often talk about “accessibility” as something exclusively to do with the gameplay, but the topic is broader than that, and SMT V is oblique and confronting enough that there will be people that can’t manage it. SMT V will probably, therefore, fail to hit the sales numbers of the more accessible Persona (at least, I don’t think it will), but that’s a concern for the suits, not we as players. As a creative vision, the goal here was to create something challenging and uncompromising, and it’s executed to a profoundly successful degree. This is an intellectual project that all-but demands that its players meet it on its level. As I joked on Twitter, the game’s back of box is throwing around terms like “an allusive story,” and, quite seriously, you don’t use those terms in the marketing collateral unless you’re assuming that players will be able to engage with the game with a certain level of intellectual complexity. 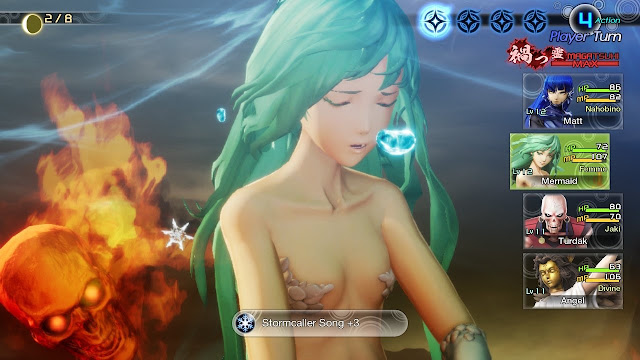 Players should go in expecting their JRPG skills to be tested, too. Even on the lowest difficult setting, as you play SMT V you’ll always feel one turn away from a party-destroying disaster. In fact, to my great embarrassment, and as someone who has played plenty of SMT titles stretching right back to Nocturne on the PS2, I was Game Overed on a stream within the first hour of play, and that was only on normal difficulty. The first major boss that you come up against will teach you, quickly, that “grinding” experience levels isn’t enough in itself, and indeed while the game makes a great performance of telling you that you should “get experience” before taking on that boss, it then makes it clear that the only way you’ll ever beat that boss is to understand the nuances of the combat system. That kind of cruelty is how the game teaches you to play it. None of this is new to SMT veterans (we all remember the Skeleton Matador from Nocturne, after all), but SMT V’s willingness to be punishing is all the more stark when set against how games are made in 2021.

The basic hook of the combat system is that enemies have weaknesses, and you need to exploit them. Hit an enemy with an attack that they’re weak against and you’ll get a free bonus attack. On the other hand, miss attacks and you’ll actually lose turns. Exploiting weaknesses is nothing new to JRPGs, but with SMT V, the need to do so is elevated to some kind of exquisite art form. With even the lowest-level enemies, if you hit them with the wrong thing, you’re in for a world of pain, and that makes running into new enemies, when you have yet to learn their weaknesses, a cause for trepidation. Furthermore, it means that every new area that you explore has a menacing tone to it at first… especially since the heal-and-save points are often buried deep inside those new areas and only after fighting a couple of battles first.

For all its brutality, however, SMT V’s combat system is majestic. Every encounter has weight, every battle forces you to approach things in a different way, and you’re never given the opportunity to become complacent. The weight of these encounters also makes convincing new monsters to join your side all the more rewarding. If you’ve never played a SMT before, then yes, this is a monster-collecting JRPG, but at the same time, this isn’t like Pokémon, where you just throw a ball at them and hope for the best. In SMT V, you need to actively negotiate with the monsters to have them join your side, and this means interpreting their wishes (and different species of demon do have different personalities to manage), as well as (typically) sacrifice health, items, and wealth in order to recruit them. 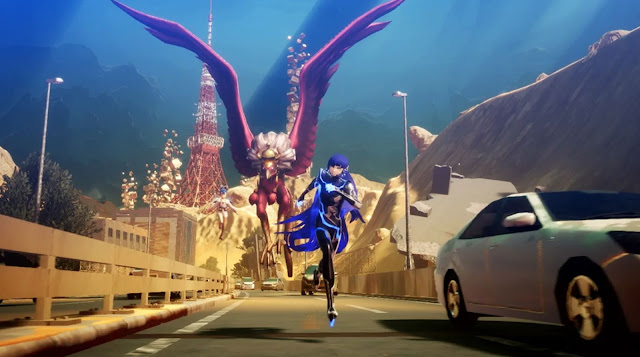 SMT V is the most consistent that we’ve seen from this system to date. There’s no guarantee that you’ll be able to convince any given creature to join your squad, but after a couple of failed negotiations with each given species, you should have a decent understanding of what makes them tick, and what the right response is for that particular negotiation. Once they’ve joined the squad, you can start combining them to form more powerful demons, too. That means that you’ll lose the two original monsters, but the combined essences will create new monsters in their place, and this is the only effective way to make sure that your party is scaling in power as the adventure continues, since monsters don’t become powerful enough from simply experience levelling to keep pace.

This is a complex system that will take some getting used to before you’re building optimal parties. Beyond the mechanics that also means that unfortunately you will be sacrificing your favourite monsters, and SMT’s creature design is so vivid that you will have favourite monsters. Naturally I tried to keep my squad filled with the pretty girl demons (and this game really pushes the fan service side of things – just wait until you see the mermaids in action), but putting that aside, another factor that largely drove which monsters were my favourites was how much effort was put into each monster’s backgrounds. One of the things that I have always loved about this series is how much effort has gone in to reflect the mythologies of cultures from all around the world in the bestiary. The fact that each creature also has s little description to explain their background is positively educational too. We might not need to read the description of the mermaid or pixie, because those creatures are already famous, but when you get to the more obscure monsters, getting a bit of the backgrounder is certainly appreciated for context.

More importantly, the clear depth of research that went in to making all these monsters authentic gives SMT V an additional gravitas that it really needed to pull off the apocalyptic angels-and-demons war story that it’s telling. That’s such a well-trodden topic that it could have easily been trite, but the earnestness with which the developers have gone about the creature design and research comes through into the game itself presents as something earnest. Nothing about SMT V feels like it’s aesthetics for the sake of aesthetics, or cynically thrown in for commercial appeal. My greatest, most powerfully overriding response to this game is that it is a complete and considered bit of art where absolutely everything in the game is there for a very specific reason to build towards a very particular theme. We rarely get games that are this carefully layered. 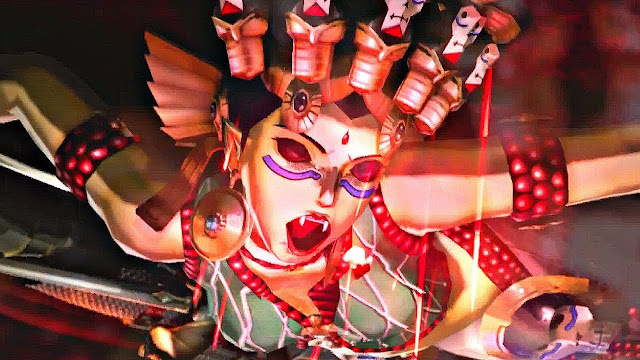 As one final note, the music in SMT V is absolutely spectacular, and once again, used in the most carefully considered way possible. A more standard JRPG has a battle theme song. We all know that. SMT has this incredible effect where once a battle has being joined there’s this tense near-silence from the music. It’s only when the first action has been taken and the actual violence starts that the music kicks in. Oddly enough, that reminded me of the stillness before an opera, ballet or symphony, where the anticipation of what is to come leads to a kind of hyper-focus from the audience and draws them deeply within the experience. We’re talking about just seconds of screen time here, but as I just wrote, SMT V is one of the most carefully considered games I’ve ever played, and those couple of seconds of screentime highlight just how carefully everything has been structured towards particular thematic effects. It’s an 80-hour game where what happens in the second-to-second moments clearly mattered to the development team.

SMT V is perhaps a little too smart for its own good, and might alienate some people in the process, but it’s also refreshing to have developers create something that actually dares to have that level of confidence in their audience. This is a game that makes few concessions and compromises, but it is rewarding in kind and has a kind of elevated gravitas that marks it out as a rare and special thing indeed. 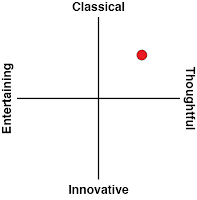