Conquer a whole lot of dust.

I really like Dune: Spice Wars. I’ve been playing the Early Access build of the game for two weeks now, and the best way I can frame it is that it’s what I would have expected if the Lord of the Rings: Battle For Middle Earth games had continued being produced. It is, fundamentally, a RTS title, but with some light 4X elements. Nothing to elevate it to Crusader Kings or even Civilization, but there are tech trees and some basic diplomacy built into the strategy that you will also need to manage.

Despite having those elements, so much of what I love about the game is the Lord of the Rings-like design and action. I love the way that military units are organised into small squads and, as they are successful in combat, they level up and become more powerful. I love carefully cultivating an elite team of warriors that can cut a swathe through an enemy’s flank (I wasn’t so happy when a sand worm swallowed one of my precious units, though). I also love the way the game is deliberately limited in terms of buildings and unit types. Thematically this makes sense, since, Dune is grim-and-gritty stuff, so the idea is that you should be scratching out an existence for your little towns and populations, not filling luxury cities with art galleries and football fields. In action, this works like Lord of the Rings, too, with the focus on a balanced core rather than something expansive.

Finally, Dune: Spice Wars downright demands extreme aggression. Just like how in Lord of the Rings things were weighted towards skirmishes being furious and over quickly, Dune has a large map, but forces you to be extremely and rapidly expansive. You’re given a “spice” quota to meet each in-game period (spice being the famous resource that the universe converges on planet Arakkis to exploit, even though the planet is almost impossible to live on). At first, having a single spice harvester will be more than enough to hit this yield, but the quota increases with each period, and before you know it you’re going to need 2, 3 or more spice fields, and that’s when you’re going to start to run into conflict with the other factions, who are going to be every bit as aggressive as you are. You have some decent defensive options available to you, but in general you’re going to be focused more on the attack, just to stay on top of the spice quotas. 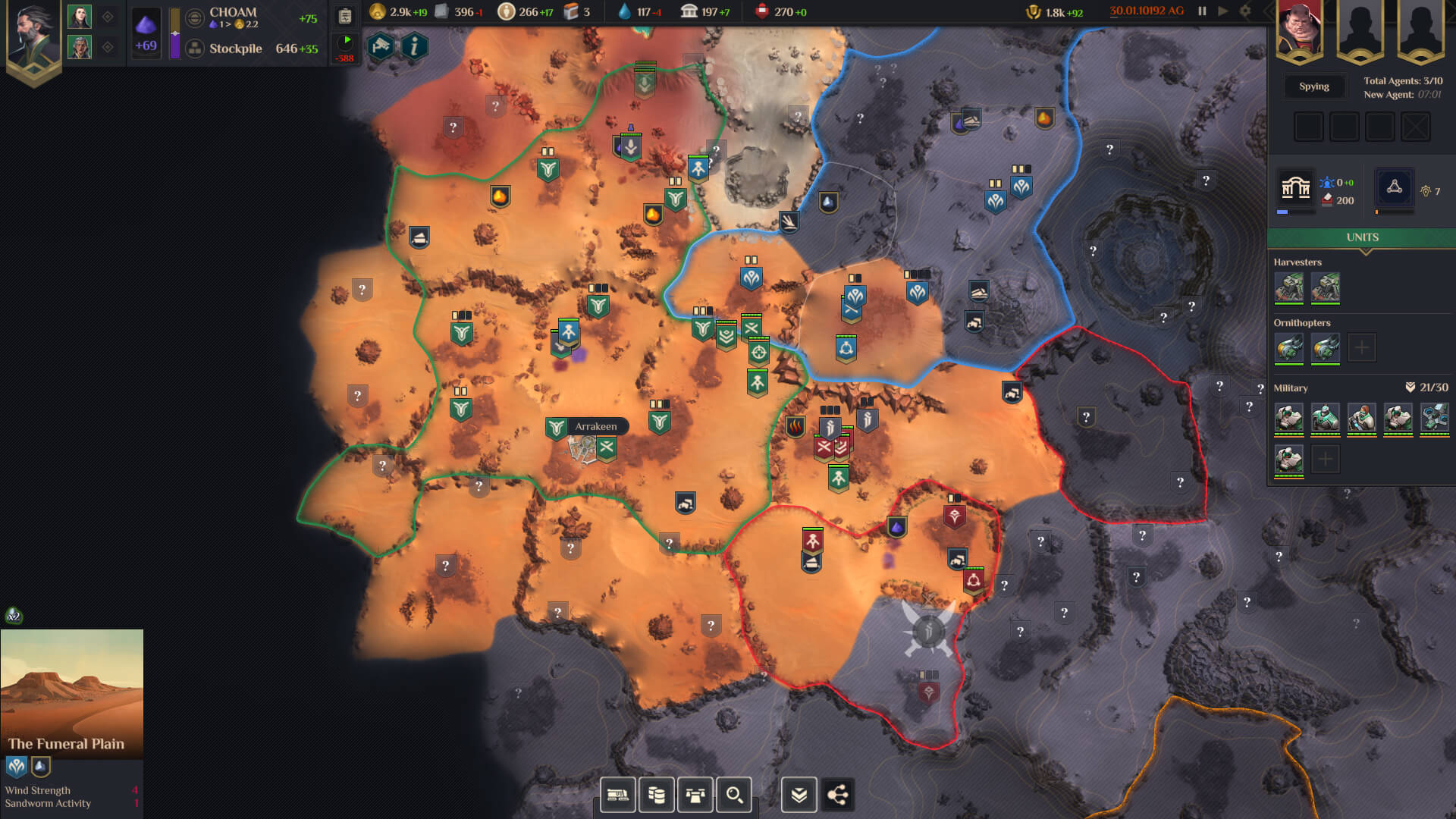 As a game, it all comes together really nicely, is the point I’m making here. It’s also good looking (as far as barren wastelands can look good), and the music is excellent and atmospheric. I have genuinely enjoyed my time playing Dune: Spice Wars. However (and you knew there was a “but” coming)…

Dune is difficult. It took two enormously talented filmmakers to fail before the third finally delivered the vision that even belongs in the same ballpark as Herbert’s book. This is a book that is not only an epic piece of science fiction literature, but it’s a particularly dense book that predominantly exists as a thesis on fascism, religion, humanity, politics and environmentalism. The “science fiction” stuff is secondary, making Dune more like a Jean-Paul Sartre or Albert Camus novel than Tolkien’s fantasy. You can’t just strip the philosophy out of Herbert’s text and expect the texture of the thing to remain the same. This is the problem that Dune: Spice Wars finds itself in. It behaves like a conversion of pulp fiction rather than literature. Like it was Lord of the Rings or Warhammer rather than… Dune.

There are hints that the developers tried to work with what they could. The spice tax quota is a good abstraction of the way these factions are all vying to exploit the planet out of its precious resource the quickest. The other factions all default to belligerence with you, which is both convenient in terms of development (the diplomacy in Spice Wars is laughably simple) but also appropriate for a game in which genuine alliances should be an impossibility. You can trade with your rivals, and that’s about the most support you can expect from them, even if you do play nice otherwise. There’s also a “United Nations”-style political council that meets frequently and allows the factions to all vote on various resolutions, such as making it more expensive to maintain armies, or increasing production for a while. The more influence you have built up, the more votes you get in the council, and that, too, mirrors the kind of politics that we see playing out in the books/film. 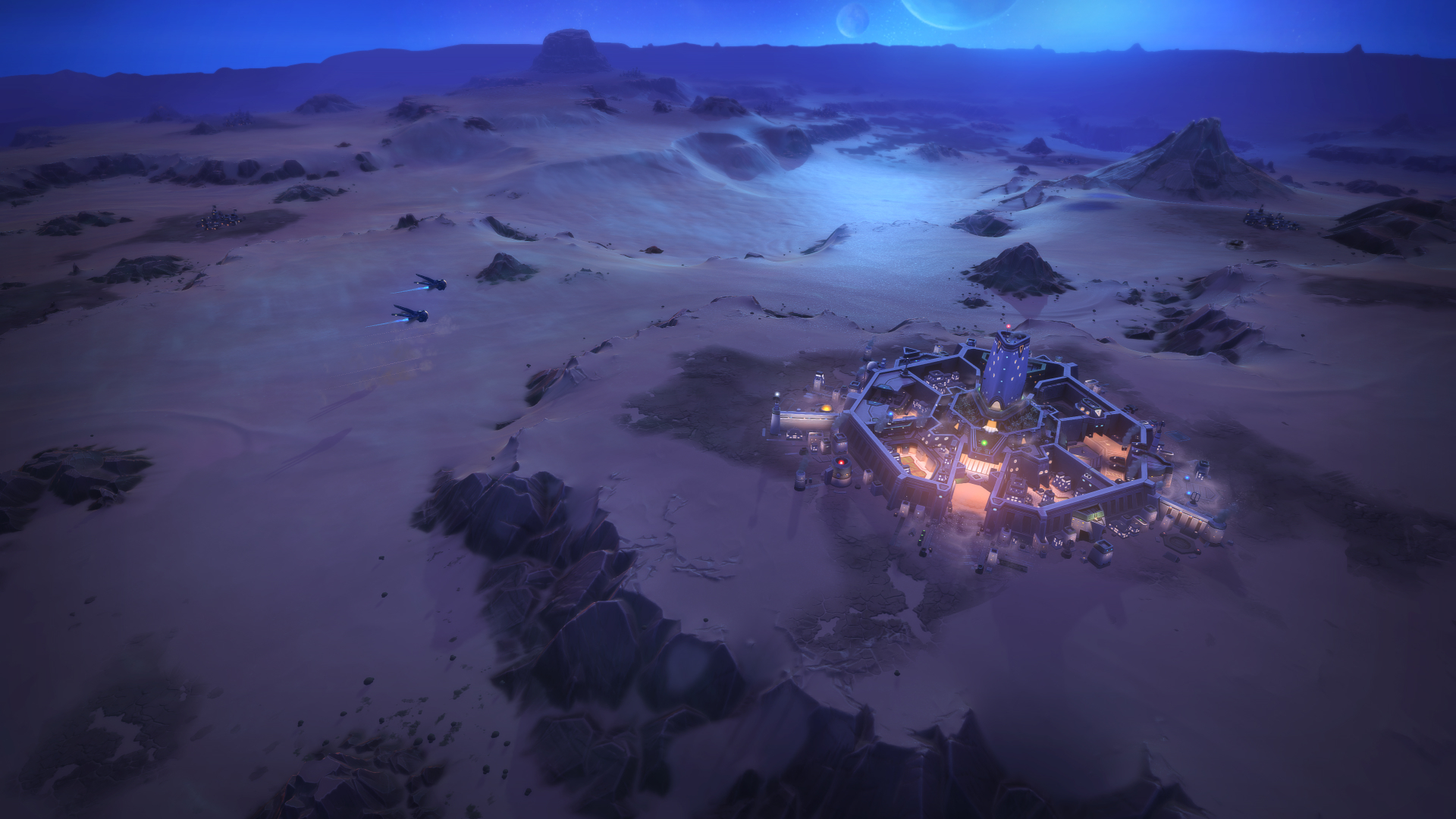 However, there’s no narrative, which kills the game’s ability to grapple with the complexities of religion and humanity. The world is presented as harsh and unforgiving (and you’ll certainly wonder about the health of your settlements when giant sandstorms sweep by them), but without getting a sense for what life is like in this world, there isn’t the moral conflict that you should feel about exploiting the people in this way. In Spice Wars you just capture towns and then set the people to work. Guilt-free resources.

Is there a solution to this? Probably not. The top-down perspective is distancing and doesn’t lend itself well to depicting moral consequence or intellectual thought. Unless you’re going to go all-out and make storytelling the focus, like Paradox did do with Crusader Kings, strategy just isn’t well-tuned towards story-focused experiences. The Lord of the Rings games got away with that because that novel series is filled with big battles, but Dune was always a thing of individuals and small-scale action. There’s a fundamental disconnect between the genre and the source material. What that means is that Dune: Spice Wars, as it develops, will likely emerge from Early Access as a game inspired by Dune rather than an authentic part of the Dune vision. While I would, of course, prefer something that truly does Herbert’s vision justice, this is still an okay approach. When it’s this much fun and gives people a chance to play around in the proverbial sandbox in-between more serious readings of Dune, Spice Wars is fine.

It’s just a pity that the developers didn’t really have a sense that there were underlying reasons that in Dune a bunch of factions were at one another’s throats. Take Spice Wars and layer Game of Thrones over it and you’re really on to something. As it is, though, I think Dune fans will enjoy this enough, but it won’t be seen as respected as the Villeneuve film was.