We’ve got a special edition of the itch.io wrap this week, on account of the Playdate’s recent release. We haven’t had the chance to get a unit of our own yet (not for lack of trying), but we were quite sure that the device would be a good one for indie developers with small, playful, creative ideas. Already there has been a bunch of Playdate games released on itch.io, so this week we’ve highlighted four games that have caught our eye and will be high on the priority list when we do finally get a Playdate.

This game looks like a delightful blend of puzzler and Bomberman, and with a hint of social conscience to boot. In Bomber Panda, you control the titular character as he aims to save the panda species from extinction. He does that by… blowing things up. Just like in Bomberman, Bomber Panda has access to power-ups that can increase his bomb capacity, explosion size and speed, and he’ll need all of that because his enemies are aggressive and after him. To win a level he needs to find the exit, and from the screenshots, it looks like that exit will often involve a key. 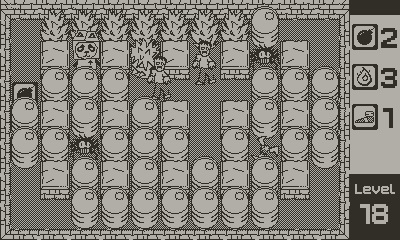 Bomber Panda has 31 levels, and the developers promise a scaling difficulty that will keep you engaged from start to finish. As an added bonus, this is one of the few Playdate games that doesn’t require the Playdate to play. Most games on that console take advantage of the little crank controller on the side – a unique gimmick that is difficult, if not impossible to emulate. Bomber Panda doesn’t use the crank though, so the Playdate simulator, available on the website, is a perfect way to test this out before going so far as to invest in the console itself.

Testing how rapidly you can press a button is perhaps the most basic video game of all, and yet one that is also firmly a game. You’ve got an objective that is skill-based (how quickly can you press a button?), a way of tracking performance (the high score), and a fail state (if you don’t beat your score). Sure, it might not make for the most in-depth work of art ever, but it can also be oddly compelling. 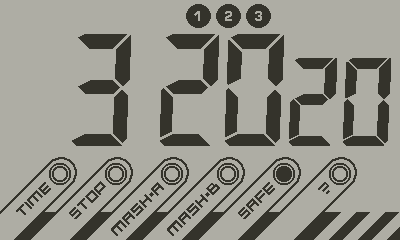 That’s what Mash Gadget is about. You’ve got two different button-pressing challenges (Mash-A and Mash-B), as well as a separate game where you need to spin the crank as quickly as you can to unlock a safe. There are even clock and stopwatch modes, and a secret unlock, which give this application a strong modern “Game & Watch” vibe, as those ancient games from Nintendo offered many of the same features.

The Legend of Zolt

This game is pretty clearly inspired by the early era Zelda titles, but it’s not a slavish effort to copy them. Rather, it’s a game with its own unique identity, challenging you to complete a dungeon of 12 separate rooms and defeat a boss as quickly as possible. It is designed to be challenging (recording your total number of deaths is always a sign of that), and while the game is not quite in a finished state so far, the developer is very actively working on it (it still needs AI for the final boss battle, for one thing).

If it does well, the developer has already mentioned that they’d like to complete three more dungeons as well as a “final boss”, which would make this a particularly substantive project for the Playdate. This is a console that will likely never have in-depth RPGs on it, but there is a lot of potential for these kinds of arcade adventure games. The aesthetic of The Legend of Zolt is gorgeous, too, and highlight’s the consoles’s ability to render smaller sprites with an intricate level of detail.

We’ve saved the very best for last. Sketch, Share, Solve is a nonogram game for Playdate, and nonograms are amazing. More than being a simple “Picross clone”, however, this is a fully-featured thing, with not just puzzles to solve, but a full puzzle-creating feature, too. 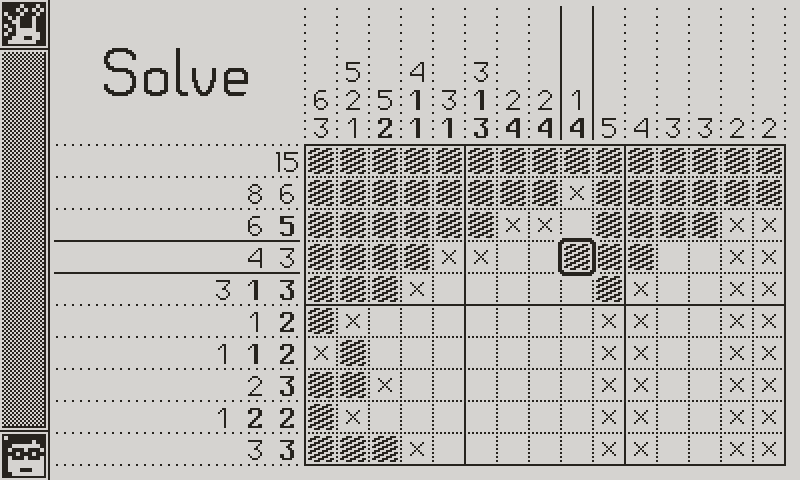 You read that right. There are 99 included puzzles to solve from the download itself (an excellent number that puts many nonogram games to shame). However, that’s just the start. The “Sketch” mode allows you to create puzzles in the in-game editor, and the “Share” feature allows you to export the puzzles and share them with other players. Unlimited Nonograms? We could be playing Sketch, Share, Solve forever.